Home » ‘Everything will work out’: Jackson confident Cambage will compete at Olympics

‘Everything will work out’: Jackson confident Cambage will compete at Olympics

Basketball legend Lauren Jackson has praised Liz Cambage for speaking her mind on issues of diversity after threatening to boycott the Olympics, but believes Basketball Australia will work to ensure she will travel to the Games.

Speaking at the celebration of 500 days until the 2022 Women’s Basketball World Cup in Sydney, Jackson said it was “fantastic” Cambage had a platform where she could speak her mind and said she had support from both current and former Opals, like herself. 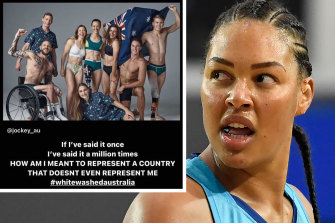 On Friday, Cambage threatened to boycott the Games on Instagram over the alleged “whitewashing” of two promotional shoots involving the Australian Olympic team.Credit:Getty, Instagram

The controversy has thrown a last-minute spanner in the works for a team that is one of Australia’s best medal contenders, with the team preparing to get their COVID-19 vaccines this week.

“She’s had such a great career with the national team. She loves the green and gold she wears it with pride,” Jackson said. “We just want to see her on that medal display with our team. She’s got an opinion and I respect that opinion like everyone does and it’s fantastic she has a platform she can use.”

Cambage is currently in the US preparing with the Las Vegas Aces for the upcoming WNBA star. She has been a part of the Opals in the last two Olympics and is one of their most instrumental players.

Current Opal Lauren Nicholson said on Monday the squad was trying to simply stay focused on preparing for the Games.

“Everyone is entitled to their own opinion. We are an inclusive sport,” Nicholson said. “She obviously adds a lot to the Opals we are just focusing on the Olympics and what we can do to win.”

Cambage’s former WNBL coach Tom Maher spoke out in response to the Opals’ social media comments in recent days and said it was inappropriate for her to “make such a big deal out of pretty much nothing”.

Cambage responded to the comments by saying writing on Instagram: “I do not care for a white man’s opinion on racial issues.”