A supermassive black hole 13.1 billion light years from Earth is driving the earliest known example of a titanic storm with winds travelling at 1.1 million miles per hour.

This titanic storm is a telltale sign these huge black holes at the centre of galaxies have a ‘profound effect’ on the growth of galaxies from the early universe, say astronomers from the National Astronomical Observatory of Japan (NAOJ)

The team say this is the earliest-yet-observed example of this type of storm coming from a black hole that is millions to billions of times more massive than the Sun. 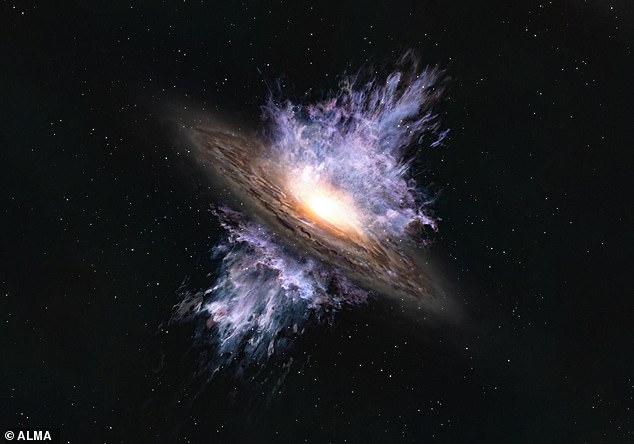 A supermassive black hole 13.1 billion light years from Earth is driving the earliest known example of a titanic storm with winds travelling at 1.1 million miles per hour

SUPERMASSIVE BLACK HOLES ARE AT THE HEART OF GALAXIES

Supermassive black holes are objects found at the heart of most galaxies.

They have a mass millions to billions of times the mass of the Sun and allow nothing to escape, not even light.

In the Milky Way the supermassive black hole is known as Sagittarius A*.

There is also a class of ultramassive black holes, with a mass of at least 10 billion times the mass of the son.

Even larger ones, with 100 billion times the mass of the sun have been dubbed stupendously large black holes.

Sitting at the centre of many large galaxies, including our own Milky Way, there is a supermassive black hole and some are more active than others.

‘At first glance, this may seem obvious, but it is actually very strange,’ the authors of the study explained, adding that the sizes of galaxies and black holes differ by 10 orders of magnitude – with galaxies significantly larger.

‘Based on this proportional relationship between the masses of two objects that are so different in size, astronomers believe that galaxies and black holes grew and evolved together through some kind of physical interaction,’ they wrote.

A galactic wind can provide this kind of physical interaction between black holes and galaxies – with larger winds impacting galactic growth.

A supermassive black hole swallows a large amount of matter. As that matter begins to move at high speed due to the black hole’s gravity it emits intense energy, which can push the surrounding matter outward. This is how the galactic wind is created.

‘The question is when did galactic winds come into existence in the Universe?’ says Takuma Izumi, the lead author of the research paper.

‘This is an important question because it is related to an important problem in astronomy: how did galaxies and supermassive black holes coevolve?’

Using the Subaru Telescope’s wide-field, they found more than 100 galaxies with supermassive black holes in the Universe more than 13 billion years ago.

Then, the research team utilised ALMA’s high sensitivity to investigate the gas motion in the host galaxies of the black holes. 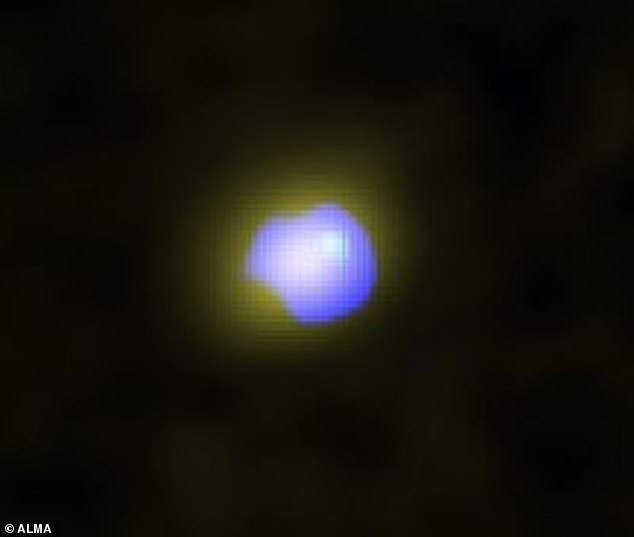 Deep in the Chilean desert, the Atacama Large Millimetre Array, or ALMA, is located in one of the driest places on Earth.

At an altitude of 16,400ft, roughly half the cruising height of a jumbo jet and almost four times the height of Ben Nevis, workers had to carry oxygen tanks to complete its construction.

Switched on in March 2013, it is the world’s most powerful ground based telescope.

It is also the highest on the planet and, at almost £1 billion ($1.2 billion), one of the most expensive of its kind.

Detailed analysis of the ALMA data revealed that there is a high-speed gas flow moving at 500 km per second in J1243+0100 or 1.1 million miles per hour.

This gas flow has enough energy to push away the stellar material in the galaxy and stop stars from forming.

It is the oldest observed example of a galaxy with a huge wind of galactic size. The previous record holder was a galaxy about 13 billion years ago; so this observation pushes the start back another 100 million years.

The team also measured the motion of the quiet gas in J1243+0100, and estimated the mass of the galaxy’s bulge, based on its gravitational balance, to be about 30 billion times that of the Sun.

The mass of the galaxy’s supermassive black hole, estimated by another method, was about 1 per cent of that, suggesting the new method could be more accurate.

This titanic storm is a telltale sign these huge black holes at the centre of galaxies have a ‘profound effect’ on the growth of galaxies from the early universe, say astronomers from the National Astronomical Observatory of Japan (NAOJ)

This implies that the coevolution of supermassive black holes and galaxies has been occurring since less than a billion years after the birth of the Universe.

‘Our observations support recent high-precision computer simulations which have predicted that coevolutionary relationships were in place even at about 13 billion years ago,’ comments Izumi.

‘We are planning to observe a large number of such objects in the future, and hope to clarify whether or not the primordial coevolution seen in this object is an accurate picture of the general Universe at that time.’

The findings have been published in The Astrophysical Journal.

Black holes are so dense and their gravitational pull is so strong that no form of radiation can escape them – not even light.

They act as intense sources of gravity which hoover up dust and gas around them. Their intense gravitational pull is thought to be what stars in galaxies orbit around.

How they are formed is still poorly understood. Astronomers believe they may form when a large cloud of gas up to 100,000 times bigger than the sun, collapses into a black hole.

Many of these black hole seeds then merge to form much larger supermassive black holes, which are found at the centre of every known massive galaxy.

Alternatively, a supermassive black hole seed could come from a giant star, about 100 times the sun’s mass, that ultimately forms into a black hole after it runs out of fuel and collapses.

When these giant stars die, they also go ‘supernova’, a huge explosion that expels the matter from the outer layers of the star into deep space.