Home Affairs Minister Peter Dutton handpicked 53 projects to share in $8.5 million for security cameras and safety lighting ahead of the last federal election, only five of which were in safe Labor seats.

The opposition has asked the auditor-general to examine the Safer Communities Fund after departmental documents revealed Mr Dutton diverted almost half the total pool of funding away from recommended projects to his handpicked ones in January 2019. 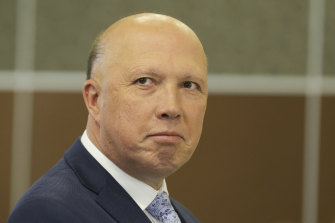 The Home Affairs department warned Mr Dutton he “may be criticised” if he decided to “make funding decisions that do not reflect the order of merit”.Credit:Alex Ellinghausen

A Home Affairs department briefing to Mr Dutton, released under freedom of information to the ABC, listed the top 70 projects able to be funded with the $17.5 million available.

It also gave him a ranked list of another 211 projects that had passed the selection criteria and recommended he pick 15 as reserves should money become available.

The minister chose 53 projects from this list – including the bottom-ranked one, improvements to a scout hall in Umina on the NSW Central Coast. Handwritten adjustments for 19 of the recommended projects and six of the reserves freed up the money needed to cover them all.

The program’s rules allowed Mr Dutton to ignore the department’s rankings and approve any grant applications he wanted. However, his department warned “should you decide to make funding decisions that do not reflect the order of merit, you may be criticised either in the media, or by the Australian National Audit Office”. 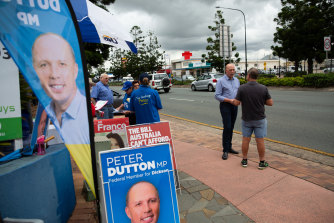 Departmental documents show Peter Dutton diverted nearly half the funding in a grants program to handpicked projects ahead of the 2019 election, including two in his own electorate.Credit:Attila Csaszar

Mr Dutton said Australians expected the government to make their communities safer and that was what the fund did.

“The suggestion that the government has done anything other than support projects worthy of support is nonsense,” he told the ABC. “I am proud of the support the Safer Communities Fund has provided to organisations such as The Scout Association, Salvation Army Trust and St Vincent de Paul who have made Australia a safer place.”

The top-ranked project on the reserve list was for the Royal Flying Doctors Service to install CCTV and security lighting at community clinics around the country. This was granted the $467,475 requested.

More than nine in 10 of the other 52 projects Mr Dutton chose were in Coalition electorates or marginal seats held by Labor or independents. The Australian Electoral Commission classifies a seat as marginal if it has a margin below six per cent.

The Liberals successfully won two of these marginal seats from Labor: Lindsay in western Sydney and Braddon in northern Tasmania.

The largest cohort of grants went to marginal Coalition-held seats, 21 of the 52 projects. Two of these were in Mr Dutton’s own seat of Dickson, which is allowed within the government’s own rules for grants.

He also approved grants in Greg Hunt’s “fairly safe” seat of Flinders and Tony Abbott’s electorate of Warringah, which was held by a margin considered “safe” by the Australian Electoral Commission, but Mr Abbott ultimately lost to independent Zali Steggall.

“Far from being a community safety program for Peter Dutton, it’s about the safety of Liberal and National Party MPs,” he said. “It is outrageous that the independent analysis given to him has been overturned and pork-barrelling when it comes to community safety.”

Labor has asked the ANAO to examine the program.

Mr Dutton also approved grants for the Burnie City Council and Waratah-Wynyard Council in the Tasmanian marginal seat of Braddon that did not meet the department’s threshold.

“The applications do not represent value for money in accordance with the program guidelines,” the department’s advice to him says.

Mr Dutton announced those grants on July 16, 2018 in the lead up to the Braddon byelection, in a joint release with Liberal candidate Brett Whiteley. The grant program’s guidelines weren’t published until August 14, 2018.

Handwritten notes signed by Mr Dutton on January 31, 2019 say the two projects “will assist with the safety of the Burnie community” and “the Wynyard and Somerset community”.