Home » Lifestyle » Dustin Johnson and his friends are knocking back 60-year old Bordeaux, caviar, and Jay-Z’s Champagne on their epic post-Masters vacation

Dustin Johnson and his friends are knocking back 60-year old Bordeaux, caviar, and Jay-Z’s Champagne on their epic post-Masters vacation 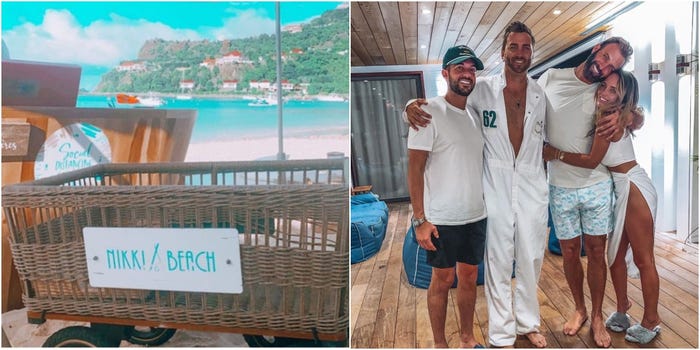 Dustin Johnson got the biggest win of his career last weekend, and he is taking a well-earned, and lavish, vacation to celebrate.

Johnson, his partner, his brother, and a group of friends are, among other things, knocking back 60-year old Bordeaux, caviar, and Jay-Z's favorite champagne on their epic post-Masters vacation.

On Monday, just a day after his record breaking win at Augusta, Johnson flew to the Caribbean island of Saint Barthélemy in a private jet with his fiancée, Paulina Gretzky, his brother Austin, and a group of friends.

Kristina Melnichenko, who is part of the group, has been sharing snaps of the luxury vacation to her Instagram.

The latest shots show the group hiring dune buggies to explore, relaxing at a private beach club, and enjoying the finest food and drink the island has to offer.

Among the food and drink on offer is Armand de Brignac Ace of Spades champagne, which is owned by Jay-Z and retails for $400 a bottle, caviar, and a bottle of 1959 Chateau Cheval Blanc Bordeaux wine.

She also posted a picture of Johnson's brother and caddie,Austin, wearing his Augusta caddy suit, but with a holiday twist.

Johnson, 36, set a Masters record during the weekend by finishing the tournament an astonishing 20 strokes under par as he claimed his first green jacket.

Afterwards, he said that he is already considering when to retire.

"My goal is to play for about, I don't know, (it) keeps getting shorter, but eight, nine, maybe 10 years, and then hang out with my kids and Paulina," he said after the victory

After his Caribbean getaway, that figure might be even smaller.

Related posts:
Vogue quietly deleted a glossy write-up of a Martha’s Vineyard wedding when it turned out the gathering caused a COVID-19 cluster
Fancy a trip to where Covid started? Wuhan launches glossy advert to attract tourists
Popular News
Jenni Murray makes brave decision to expose remaining breast on ITV in aid of cancer
02/12/2020
Man Utd wonderkid Ramon Calliste, called ‘the next Giggs’, now owns luxury watch business and makes £5m a year – The Sun
26/03/2020
Megan Thee Stallion Addresses Criticism Over Twerking: ‘I Love to Shake My A**’
26/03/2020
Police guard shops to stop coronavirus panic-buyers and enforce social distancing – The Sun
26/03/2020
Coronavirus: Good Morning Britain’s Dr Hilary reveals ‘game-changing’ self-testing kit
26/03/2020
Recent Posts
This website uses cookies to improve your user experience and to provide you with advertisements that are relevant to your interests. By continuing to browse the site you are agreeing to our use of cookies.Ok