A breast cancer surgeon who was redeployed to the Covid frontline at the onset of the pandemic has spoken of the guilt she feels for not seeing her mother for six months before she died.

Rebecca Lewis, 40, of Battersea, south west London, told how her mum, who lived in Essex, went into hospital before the first national lockdown after being diagnosed with rapid onset dementia, and was moved to a care home in June.

Not wanting to risk spreading the virus if she visited, Rebecca stayed away, unaware that her mother was so close to the end of her life.

She passed away in early August, and Rebecca – who has continued to work full-time since – admitted she doesn’t feel she’s been properly able to grieve; a feeling she believes is shared by many healthcare workers who have lost people during the pandemic. 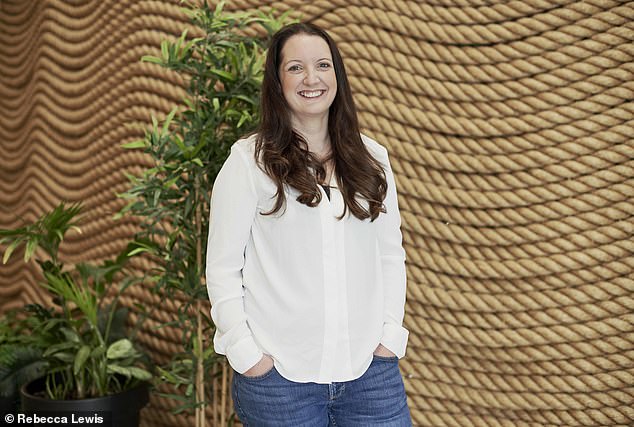 Rebecca Lewis, 40, of Battersea, south west London, was redeployed to the Covid frontline at the onset of the pandemic and has spoken of the guilt she feels for not seeing her mother for six months before she died

Speaking to FEMAIL, Rebecca said she feels ‘massively’ guilty about not seeing her, adding: ‘Because she was very confused, she just thought I’d abandoned her.

‘She knew there was a virus around and she was listening to the news, she was able to understand that something weird was happening, but usually when I spoke to her she used to beg me to come and get her, which I obviously couldn’t do.

‘It made it much worse that she was really confused and she didn’t know what to do, and neither did I.’

Rebecca last saw her mother in February 2020, just before she went into hospital, and said she would have turned up on the doorstep of the care home had she known she was dying.

‘It was horrible, I hadn’t seen her in six months, which was very odd for me because before she became ill we spoke every day and we were very close,’ she said.

Rebecca told how her mum, who lived in Essex, went into hospital before the first national lockdown and was moved to a care home in June before she passed away in August. Pictured: Rebecca (right) with her mother (centre) and sister

‘They moved her to get her out of hospital, not because they thought she was going to die – that wasn’t expected.’

Asked if she feels she hasn’t had time to properly grieve, Rebecca said: ‘I would say so, yes. I’ve been working full time since then; I think in some ways that’s a good thing for me because I don’t really want too much time to think about it.

‘But I think definitely yes, and I think that’s happened to a lot of my colleagues who have lost people, colleagues and members of their family in the last year, and we’ve just had to carry on.’

Rebecca added that she is convinced the pandemic will leave a devastating impact on mental health and the treatment of other diseases, particularly cancer.

‘I think when we are allowed to mix, it will be more obvious who’s missing. It will be very odd and I definitely think there will be some mental health issues that come out of this for everybody,’ she said. 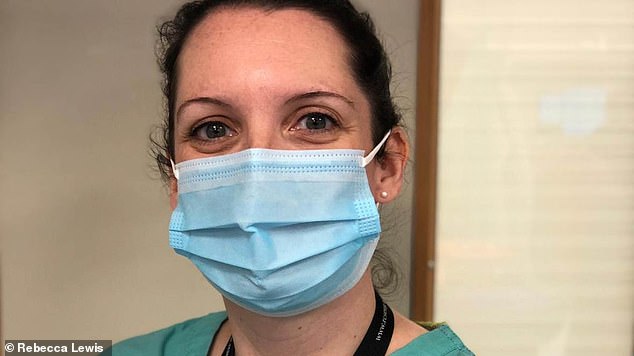 Rebecca said she is convinced the pandemic will leave a devastating impact on mental health and the treatment of other diseases, particularly cancer

‘I also think people are missing out on diagnoses because they’re scared to come to the hospital. Most of the cancer surgery has been postponed again.

‘We’ve been trying to do a lot of work on getting ladies to come and reassure them as best we can that the clinic is a safe place. But we’re seeing that a lot of people have left it later than they would normally.’

Rebecca, who now works in a hospital which only treats cancer patients, said this lockdown feels ‘worse than last time’ because the medical profession ‘saw the second wave coming’.

‘We tried to warn the government how to avoid it and they ignored us, so now we’re stuck in this again,’ she said.

One thing that’s helped Rebecca and her husband Frederico, 44, get through this immensely difficult time is a childcare app called Bubble, which she said has been incredibly helpful for finding people to look after their two-and-a-half-year-old son Sebastian. 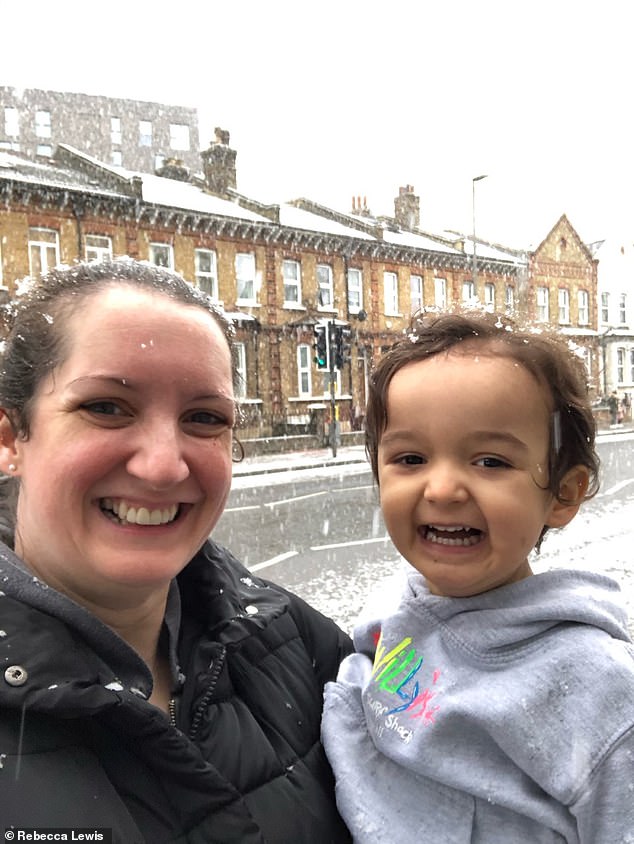 One thing that’s helped Rebecca and her husband Frederico, 44, get through this immensely difficult time is a childcare app called Bubble, which she said has been incredibly helpful for finding people to look after their two-and-a-half-year-old son Sebastian (pictured together)

Bubble is the UK’s biggest on-demand childcare platform, with more than 100,000 users. Parents can use the app to find, book and pay local sitters who come recommended from their friends and other parents in their area.

‘It’s been really helpful,’ Rebecca explained. ‘My husband works as a barrister so his schedule can be extremely hectic, so childcare responsibilities are challenging. Without any outside support I would not have been able to continue working.

‘We were running out of options, and I needed to find a solution so I could do my job and help save people in the fight against the virus.

‘It was a very scary time, everything blurred into one and I often didn’t know what day it was. I had to mentally prepare for my job in a short space of time as well as arrange childcare for Sebastian that I was comfortable with.’

Rebecca described Bubble as like ‘online dating for nannies’, adding: ‘Girls put their profile on there and then they match you up, and you say yes or no based on their reviews. We’ve used a few and they’ve all been really good. 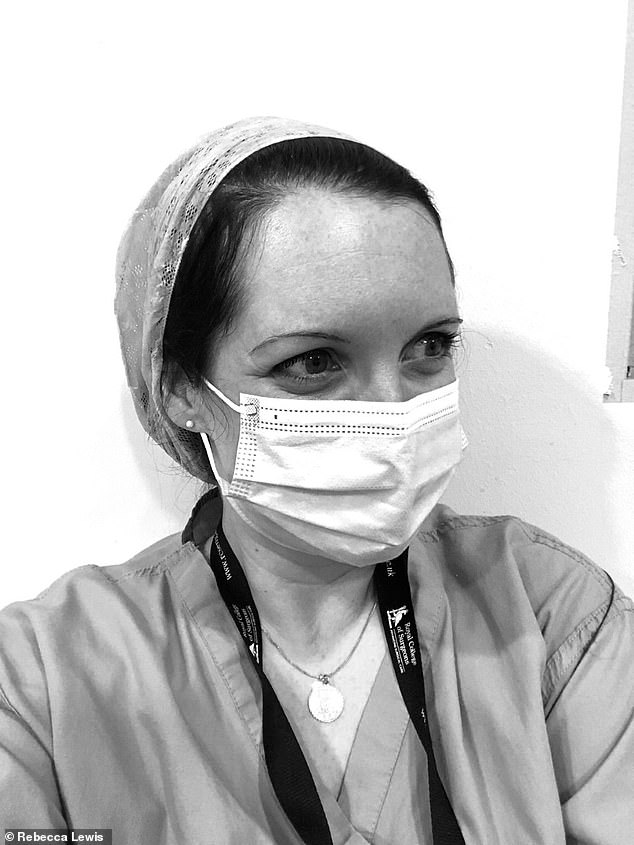 Rebecca said she is grateful for the extra time she has spent with her son since the onset of the pandemic, and knows her mother would be proud of what she has achieved in the battle against Covid

‘A couple of months ago our nursery fell through, and the main girl we have on Bubble, who is just wonderful, dropped everything and came and babysat for us.

‘Without that me or my husband would have had to have taken emergency annual leave for a week, so it’s made a big difference having her around.’

To support the NHS during Covid and help parents within the health service get to their shifts, Bubble modified its app to enable NHS workers to find free local childcare.

Rebecca said she knows her mother would be proud of what she has achieved in the battle against Covid.

‘Never did I expect that I would be faced with the loss of a loved one in the midst of a global pandemic,’ she said. ‘However, I knew I had to carry on and I’ve seen first-hand that as a team the NHS is adaptable, and we can adapt at speed.

‘I’ve learnt that in these changing times flexible childcare is a must, and we can’t always rely on the old format. There has been many a Sunday where my husband and I wonder if the nursery is going to be closed when we wake up and if we need to make a contingency plan.

‘It’s been an extremely stressful time. But having Bubble essentially enabled me to save lives.’