After Sue’s devastating betrayal, Emily and Austin both find themselves leaning on each other as their lives – and the world around them – starts to spin out of control.

In the penultimate episode of Dickinson’s season second, we find one of the greatest poet’s in American history at the lowest she’s ever been. Emily has locked herself in her room, the image of Sue and Sam having sex burned into her mind. Downstairs, Austin has rushed over from his house, still in his dressing gown, pleading with his mother to help with throw a party for his college buddies. He had planned on Sue being home, but without notice, she has disappeared to see ‘a friend.’

His mother is happy to help him, even though it means she’ll be throwing two Dickinson affairs in the same afternoon: one for him, and one for Edward, who is holding a meeting without his son to discuss his new investment with his business partners: Sam Bowles’ newspaper. Furious with his father for not consulting him, the Dickinson men get into a war of words, with Edward hitting his son where it hurts most by calling him a failure and a joke. 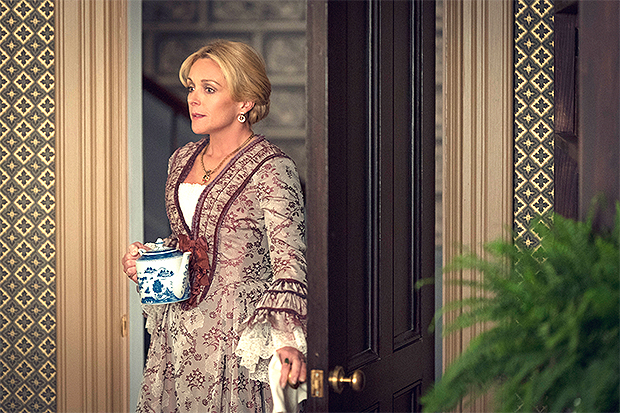 Sam arrives at the house then, bringing news of the failed attempt by abolitionist John Brown to attack Harper’s Ferry. You’ll remember from last week that Henry, the editor of the abolitionist newspaper The Constellation and the Dickinson’s handyman, had sent money to John Brown to help with this plan. After hearing that authorities are looking for John Brown’s co-conspirators from Sam, Austin rushes from the house to find Henry and warn him. But there’s no need– Henry already knows and is planning to flee with his family. Austin is crushed – he thought he was making a difference in helping Henry – but both men are left disappointed, with Henry admitting it looks like the country will need to get worse before it gets better.

Meanwhile, when we finally catch up with her, Sue is in the last place anyone would suspect, given her activities the night before with Sam: sitting in Sam’s living room, catching up with his wife, Mary. Mary is beautiful, but withdrawn, and all too quickly, she admits to Sue that she knows Sam is cheating on her with someone in Amherst. However, she doesn’t appear to know it’s Sue, as she feels comfortable enough sharing with her old friend the real reason she hasn’t left the house in months. While Sam has been telling people she’s ill – and telling Emily she made Mary feel uncomfortable with her letter – the truth is, she had a miscarriage and has been too devastated to face anyone. Hearing this rocks Sue, who admits for the first time to anyone apart of Emily that she had a miscarriage too and that she’s spent the last year doing everything she can to push the pain away. Mary rushes to Sue to hug her and Sue, finally, allows herself to truly break down in tears over her loss. 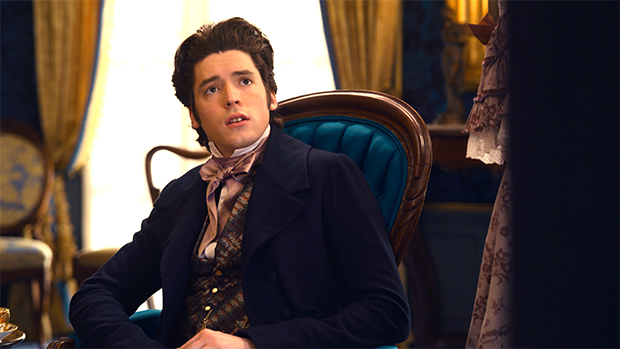 Back at home, Austin has George, Ship, and all his college buddies over at the Evergreens and they find themselves deep in conversation about the impending Civil War. There’s some incredible jokes made here about ‘Brown Bros’ and ‘Blue Apron’, all as they wait for the guest of honor, their pal Frasier Sterns, who Austin ran into at the opera. But it’s Emily who comes to the door first. She’s finally left her room, still looking to be in a daze. Shortly after, there’s another knock at the door, and Emily offers to answer it. Who should be standing before her Frasier Stern – aka, the apparition she’s named Nobody.

Emily loses it. She starts screaming about Frasier being shot and killed, how he needs to leave West Point and not be a solider. Austin pulls her away into the library, right into the exact same room and spot Emily saw Sue cheating with Sam in not hours before. Realizing that everything she saw while she was invisible did in fact happen, she immediately tells Austin of Sue’s betrayal. To her surprise, he tells her he’s known for weeks about the affair. In her fury, Emily mistakenly assumes Austin knows everything, including the fact that Sue had a miscarriage. It immediately becomes clear he didn’t and now, it’s his turn to lose it. He smashes a vase and falls to his knees in tears over all of his failures: working with his dad, helping Henry, making Sue happy, and now this.

The scene is a world away from where Austin and Emily were the same time last season. While their love for Sue drove a wedge between them then, now, having both been deeply hurt by her, they’ve come together similarly scarred. Emily comforts him and assures him that she could not survive without his love and that he, unlike everyone else in her life, is not a fraud. He is genuine, which is likely why he was the only person to see her the night before, when she was invisible.

She leaves him, letting him take a moment to himself. She returns to the salon to see everyone has left, but Frasier. She apologizes for yelling at him, but he’s unbothered. “I’m training to be a solider. I’ve got to be tough,” he says, confirming Emily’s vision of his fatal future in battle. He changes the subject to her poetry, and compliments the poem he read in the paper. He asks if she’ll publish more, and she tells him how she’s given everything to her editor, but that she regrets it now; fame isn’t good for her. In a very matter of fact way, he tells her she needs to get her poems back. And with that, it looks like she’s ready to do just that.

Finally, in a very heavy episode, there was one moment of levity, and I must give my sincerest thanks to Anna Baryshnikov for one of her best scenes all season. Though Vinnie and Ship called it quits the episode before, Ship comes crawling back to her, begging she take him back, so that they can face the uncertain future together. She at first refuses, pointing out he just can’t seem to accept her for the horny, witchy woman she is. He wants a chance to prove to her she’s wrong, and with that, Vinnie launches into a sexy, spider dance, dressed in black, just like Lola Montez. She beats Ship with a whip, she strips, she acts wild and true to herself. And Ship loves every minute of it.