Venue owner Maz Salt is in the business of bringing people together, but his business model is on shaky ground as Melbourne staggers out of 15 weeks of lockdown.

"What we do is create environments and communities where people can get together and talk and share and all of those kinds of things," Mr Salt said. "And that is effectively prohibited at the moment." 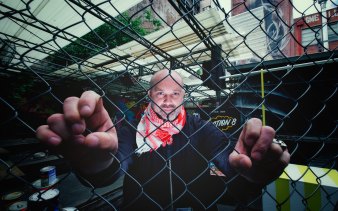 Mr Salt describes himself as an eternal optimist – "you have to be, in hospitality" – but even his optimism is being stretched.

"Not only are we reopening with reduced circumstances, we had more debt than we've ever had before, including deferred payments and a whole raft of things," he said.

"Not to mention the personal circumstances; we've had a mortgage deferred for several months now as well, so there's a whole raft of things that makes the whole picture really, really complex."

For some venue operators, those rules will be too much. It will simply not be financially viable for them to open with reduced patron numbers.

Mr Salt's CBD institution Section 8 will reopen, albeit in a very different form. Drinks staff will be retrained to serve food and wait on customers, there will be limits on patron numbers, and strict distancing measures will be enforced.

But for his nearby bar Ferdydurke, the future is less certain. An intimate venue that used to regularly host live music, if it opened on Wednesday it could do so with only 13 people inside – including staff.

He has had to permanently close another CBD venue, Globe Alley, after being unable to pay the rent during lockdown.

Across the city there are countless stories like this. Despite widespread relief and elation at the lockdown coming to an end, now the real work of rebuilding the city's shattered economy begins.

On Monday, Senate estimates hearings in Canberra were told Victoria's lockdown had cost $100 million, and the loss of 1200 jobs every day it went on.

In April, the City of Melbourne surveyed food businesses, finding that 14.5 per cent had closed, or were considering closing. Another lockdown later, no one knows how many will close for good. 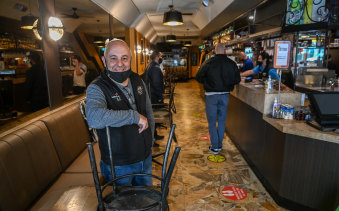 Carlton restaurateur Salvatore Cultrera said his biggest challenge had been getting back staff at such short notice. Five workers, including himself, have been kept on thanks to JobKeeper, but some casuals, mostly students and international travellers, have been lost.

His Lygon Street restaurant, Cafe Notturno, has been open for takeaway throughout the second wave. Getting people back sitting inside was "massive" for the business.

"Though, even then it's tough because we're still very limited," Mr Cultrera said. "We'll rely on turnover [of customers] and I think people are pretty good about that. They understand."

As Melbourne recorded its second consecutive day of no new cases and no new deaths from COVID-19, Premier Daniel Andrews urged people to remain vigilant in defending what has been won.

"I know there's a real buzz and an energy around the city and, indeed, the state today, because people can see what they've been able to achieve. They see what they've built and they know and understand that it's come at a really significant cost," he said.

"But we all have to remain vigilant."

Related posts:
Live Updates: Massive wildfire may have been sparked by California utility equipment
Did 'Southern Charm's' Shep Rose Cheat on His Girlfriend Taylor Ann Green?
Popular News
I’m A Celebrity ditch TWO more campmates in brutal double vote off tonight
01/12/2020
Man Utd wonderkid Ramon Calliste, called ‘the next Giggs’, now owns luxury watch business and makes £5m a year – The Sun
26/03/2020
Megan Thee Stallion Addresses Criticism Over Twerking: ‘I Love to Shake My A**’
26/03/2020
Police guard shops to stop coronavirus panic-buyers and enforce social distancing – The Sun
26/03/2020
Coronavirus: Good Morning Britain’s Dr Hilary reveals ‘game-changing’ self-testing kit
26/03/2020
Recent Posts
This website uses cookies to improve your user experience and to provide you with advertisements that are relevant to your interests. By continuing to browse the site you are agreeing to our use of cookies.Ok