Daughter of Holocaust survivor on Duke of Edinburgh's mother

The daughter of a Holocaust survivor saved from the Nazis by Prince Philip’s mother Princess Alice has said the story of the ‘courageous act’ must keep being told to keep her memory alive.

During the Nazi occupation of Greece in 1943, the British princess – who was married to Prince Andrew of Greece – sheltered a Jewish family to avoid deportation to death camps.

Evy Cohen, 65, has revealed how her father Alfred Haimaki Cohen, head of a prominent family with ties to Greek royalty, sought out the royal as their only hope of refuge from the Nazis.

The royal gave shelter to widow Rachel Cohen and two of her children, Tilde and Michel, before Evy’s father Alfred fled the country, knowing his family would be safe in the care of Alice.

Speaking to The Sun following the tragic death of Prince Philip last Friday, Evy insisted that her family ‘would not exist without the courageous act of Princess Alice.’ 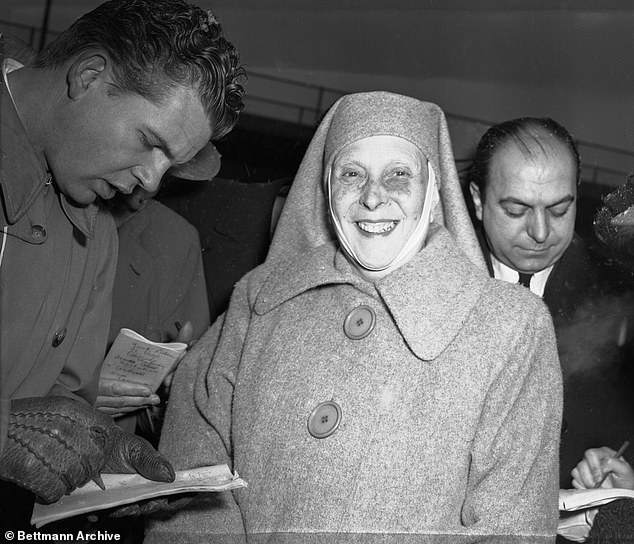 The daughter of a holocaust survivor saved from Nazis by Prince Philip’s mother Princess Alice has thanked the late royal for her bravery. Princess Alice is pictured in 1945 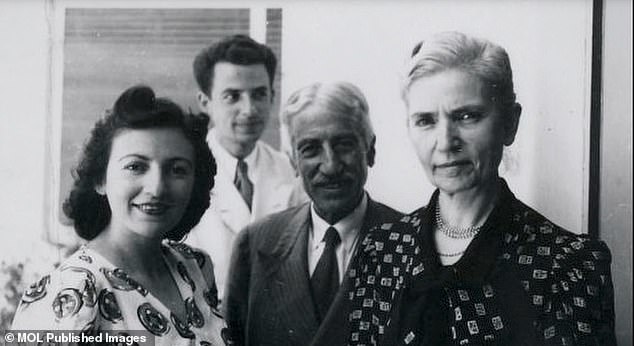 She added: ‘Princess Alice’s story of incredible courage must keep being told in her memory.’

Her father Alfred was a prominent member of the community of 8,000 Jewish people in Athens, who came across Alice’s lady-in-waiting and sought help from Nazi persecution.

The royal quickly offered the family refuge on the top floor of her house, only yards from Gestapo headquarters.

Princess Alice, who was born in Windsor Castle lived in Athens during the Second World War. Her son Prince Philip moved to the UK as a boy and lived under the care of his uncle Lord Mountbatten. 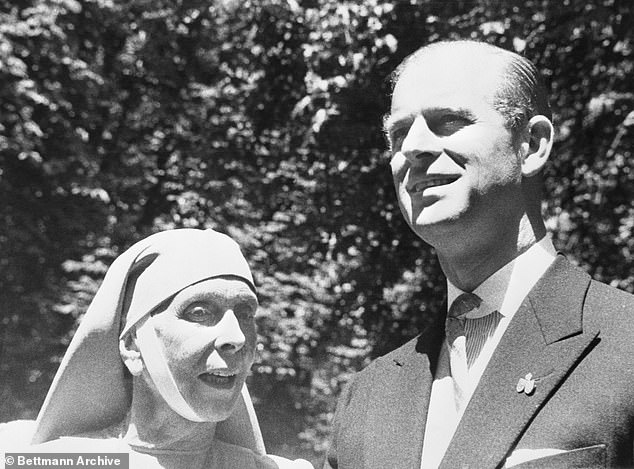 Princess Alice has been formally recognised for the bravery and courage she demonstrated hiding members of the Cohen family during the Nazi persecution. She is pictured with her son, Prince Philip, at Windsor Castle

Many TV viewers were introduced to the remarkable story of the Duke of Edinburgh’s mother in the third series of The Crown, where she was played by actress Jane Lapotaire.

It showed how Princess Alice moved to Buckingham Palace in 1967 and remained in the UK for the last two years of her life.

Princess Alice has been formally recognised for the bravery and courage she demonstrated hiding members of the Cohen family during the Nazi persecution.

He wrote: ‘For us it was an absolute miracle, in short that lady [in waiting] had gone to see the Princess and an hour later we were informed that the Princess Alice would be more than happy to take in my mother and sister.

Dr Anna Whitelock, royal historian and expert explained that when the German generals came around looking for Jewish people in hiding, Alice pretended couldn’t understand them, because she was deaf, and they thought she was ‘a silly old woman and left her in peace’. 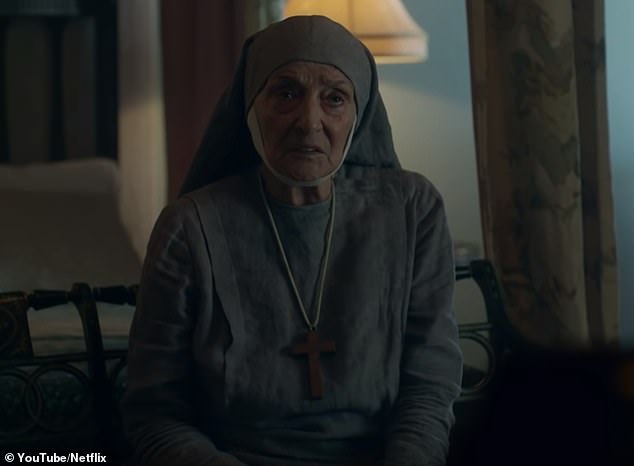 Many TV viewers were introduced to Princess Alice in Netflix’s The Crown, with actress Jane Lapotaire playing her in the third series of the hit royal drama 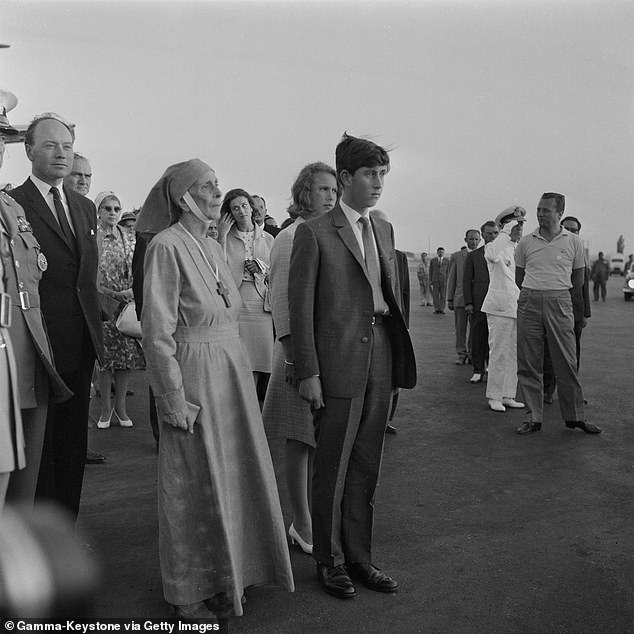 Alice of Battenburg is pictured with Prince Charles as young man. The royal died at Windsor Castle in 1969

‘People were being executed for looking after Jewish families, but Alice had no fear,’ said Ingrid Seward, editor of Majesty magazine.

The Cohen family was never discovered, and Alice kept her bravery a secret throughout her life.

Alice was born deaf and later diagnosed with schizophrenia, yet she would learn to read lips in German, English, Greek, and dedicate her life to helping others.

Sent to a mental asylum, given controversial electroshock treatment by Sigmund Freud, she would overcome the most extraordinary personal challenges to help those she saw as more in need than herself.

During the war, and separated from her children, she served as a military nurse on the frontline and founded an order of nursing nuns in Greece, before finally coming to live at Buckingham Palace, with the Queen. 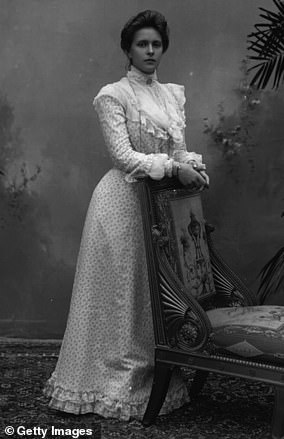 Princess Alice of Battenberg circa. 1910

Alice was born Princess Alice of Battenberg in 1885 at Windsor Castle, a great-granddaughter of Queen Victoria, and raised as an English princess, although both her parents were German.

Alice was congenitally deaf but she could speak clearly. Photographs show how beautiful she was, with her upswept hair and lace gowns.

Then in 1902, at the Coronation of King Edward VII, she fell head over heels in love with Prince Andrew, a younger son of the King of Greece. As her niece, Lady Pamela Hicks, has previously said, ‘She was absolutely dotty about him. Really, deeply in love.’

By 1914 Alice had four daughters. But in Greece, revolution was brewing, and shortly after Prince Philip was born in 1921, the Greek royal family were exiled.

Aged 18 months, the future Duke of Edinburgh was bundled into a makeshift cot – an orange crate – as the family escaped on a British warship.

They arrived in Paris as refugees, living on handouts from relatives. The strain took its toll on Alice, and her impassioned religious beliefs became steadily more eccentric.

By 1930 she was hearing voices and believed she was having physical relationships with Jesus and other religious figures.

She was diagnosed as schizophrenic, and when treatment in a Berlin clinic failed – on the advice of Sigmund Freud her womb was blasted with X-rays to cure her of frustrated sexual desires – she was admitted to a Swiss sanatorium. 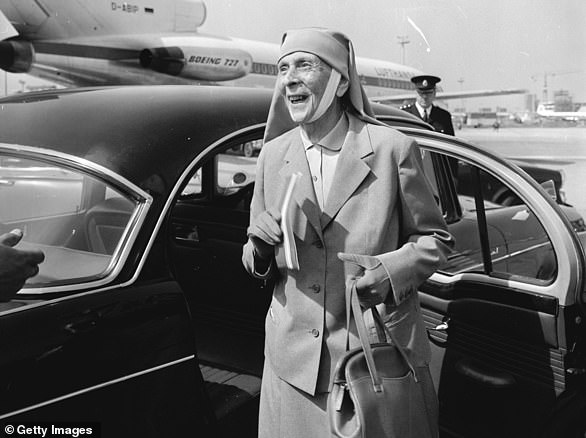 Princess Alice of Greece at London Airport in 1965. She spent her final years living with her son and daughter-in-law in Buckingham Palace

On the day she left, the nine-year-old Prince Philip was taken out by his grandmother for a picnic. When he returned, his mother had gone.

She remained a prisoner there for two and a half years.

Although the couple never divorced, Alice was effectively abandoned by her playboy husband Prince Andrew, who went to live on the French Riviera with his mistress.

Prince Philip was now homeless, spending boarding school holidays with various relatives, including his uncle Lord Louis Mountbatten, father of Countess Mountbatten. She recalls that when Philip visited them one Christmas, he signed his name in the visitors’ book and gave his address as ‘no fixed abode’.

When Alice was eventually released from the sanatorium in 1932, she became a lonely drifter, staying in modest German B&Bs. Almuth Reuter, whose mother ran a boarding house in Cologne, remembers their unusual guest.

Mother and son were not to meet again until tragic circumstances forced them together, reuniting in 1937 at the funeral of Philip’s sister Cécilie, who’d died in a plane crash at the age of 26. 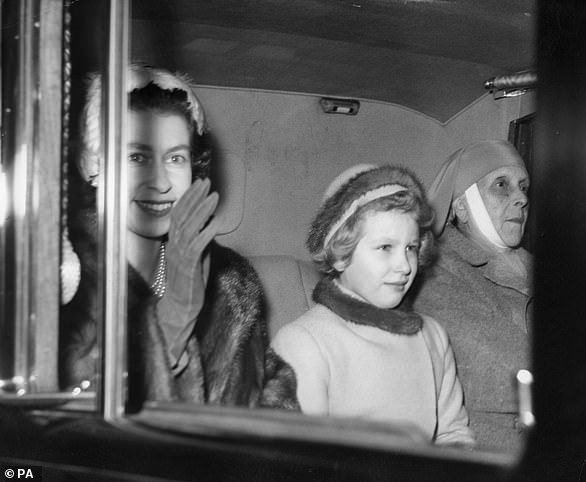 Alice wanted Philip, now 16, to live with her in Athens (the Greek monarchy having been restored in 1935). But Philip’s future lay in the Royal Navy. And by 1941, Alice was stranded in Nazi-occupied Greece.

Her brother, Lord Mountbatten, sent food parcels – which she gave to the needy. Then, for more than a year, she hid a Jewish family on the top floor of her house, only yards from Gestapo headquarters. When the Gestapo became suspicious, Alice made her deafness an excuse for not answering their questions.

After the war, diamonds from Alice’s tiara were reset so Philip had an engagement ring to present to Princess Elizabeth, the future Queen. Alice sold the rest of her jewels to found her own religious order, the Christian Sisterhood Of Martha And Mary, in 1949 and built a convent and orphanage in a poor suburb of Athens. Her family was sceptical.

When there was a Greek military coup in 1967, Alice refused to budge from Athens until Prince Philip sent a plane, along with a special request from the Queen, to bring her home.

Shortly before Alice died in 1969, she wrote to her only son, whose childhood had been so scarred by her absence, ‘Dearest Philip, Be brave, and remember I will never leave you, and you will always find me when you need me most. All my devoted love, your old Mama.’