Home » Lifestyle » Danielle Bernstein is embroiled in a legal battle after a brand claimed she copied its designs. Here are some of the WeWoreWhat founder’s biggest controversies.

Danielle Bernstein is embroiled in a legal battle after a brand claimed she copied its designs. Here are some of the WeWoreWhat founder’s biggest controversies. 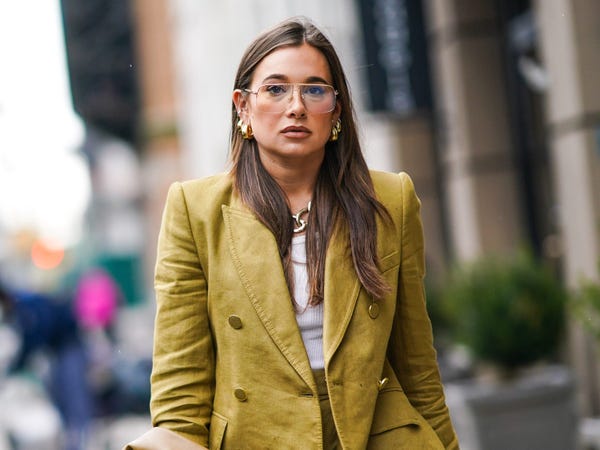 Mega-influencer Danielle Bernstein has 2.5 million Instagram followers, and her success story all started with a student-run blog.

At 18 years old, the Long Island-native transferred from the University of Wisconsin-Madison to the Fashion Institute of Technology (FIT) and started a website called WeWoreWhat, which aimed to document New York City street style.

Bernstein has since launched multiple fashion brands, collaborated with major designers, and even written a book about her story. In 2017, she made Forbes' "30 under 30" list and said she earned "upwards of seven figures" the year prior.

But as her fashion career has taken off, so have the controversies surrounding her.

Owners of small businesses like The Great Eros and Foundrae have accused Bernstein of copying their designs, and fans have expressed their disappointment about her behavior during the pandemic and the negative messages she's shared about body image.

Keep reading to see some of the biggest controversies surrounding the mega-influencer.

May 2018: Bernstein was accused of copying several jewelry lines after she released a collaboration with Lulu DK. 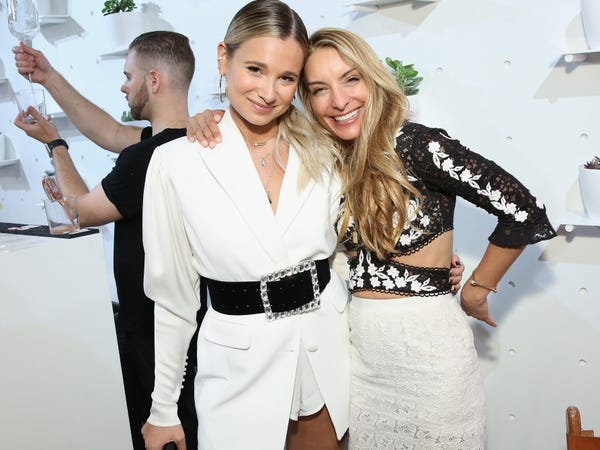 According to People, Bernstein cited her own "fine jewelry" as the inspiration for the Lulu DK x WeWoreWhat line.

But Diet Prada, an Instagram account dedicated to calling out influencers and individuals in the fashion world, accused Bernstein of cherry-picking designs from other lines. The account posted a series of side-by-side photos comparing the Bernstein's line with pieces from Foundrae, Retrouvaí, Bondeye Jewelry, and Tiffany & Co.

In response to the backlash, Bernstein posted a tearful video on her Instagram story insisting that the line was inspired by her late grandfather, rather than other brands.

However, the Daily Mail reported she would remove several of the pieces. Nordstrom also issued a statement confirming that WeWoreWhat and Lulu DK wouldn't sell the "pieces in question" as a result of the criticism.

January 2020: Bernstein feuded with a Poshmark seller after the seller purchased unreleased samples from her WeWoreWhat x Onia swimwear and put them up for sale. 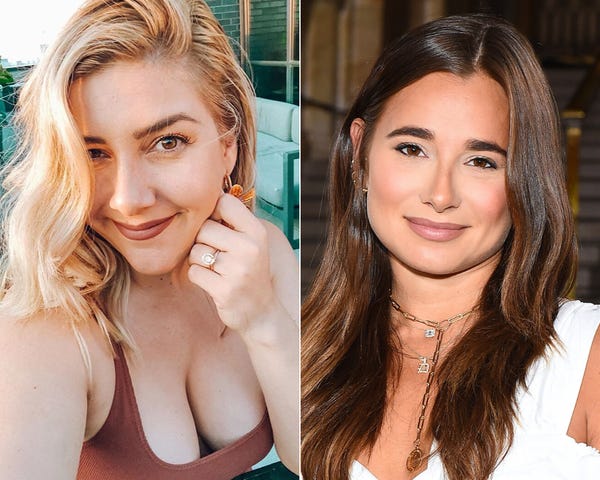 On January 12, Poshmark seller Jade Myers received an Instagram message from Bernstein pleading with her to take down swimwear she had put up for sale, BuzzFeed News reported. The pieces were unreleased items from an upcoming collection of Bernstein's, and Myers received them by mistake.

According to screenshots of their exchange, Myers asked Bernstein to buy back the samples at the price she posted them for on Poshmark. Bernstein responded that she would "pay for every single piece."

But later, Bernstein said she would only give Myers what she paid for pieces, not the resale price. The feud blew up publicly, and according to BuzzFeed, an attorney who represented Bernstein soon got involved.

On January 17, Myers said on Instagram she and Bernstein had come to a resolution — Myers would receive items from a current collection of Bernstein's —  which Bernstein confirmed. Apparently, there were tears involved.

March 2020: Critics said that one of the designs from Bernstein's Macy's line mirrored one of her favorite designers, Cecilie Bahnsen. 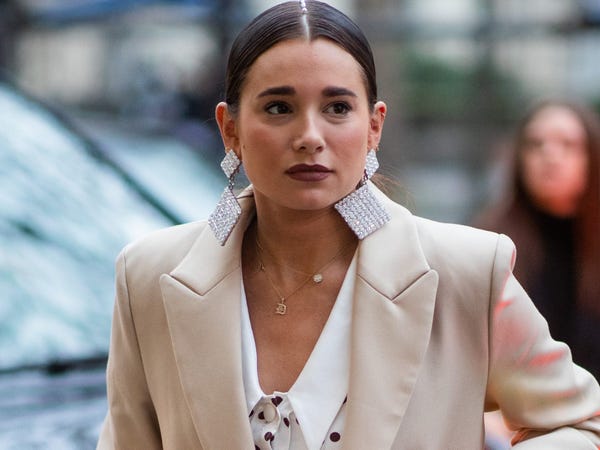 Bernstein didn't respond to the backlash, and the dress in question is still on Macy's site, though it's marked as "currently unavailable." In 2019, Bernstein appeared to be a Bahnsen loyalist, wearing the Danish designer's garments numerous times and tagging her in posts.

Bahnsen didn't directly address the claims. But in a January interview with Harper's Bazaar, she discussed how she dealt with fast fashion brands that mimick her designs.

"You have to take it as a compliment and also a challenge to keep moving on and to be innovative," she said. "It's always a shame when the high street copies a young brand because you don't even get to start before a bigger company takes what you do."

July 2020: Bernstein was called out for saying she was going to remake a pair of "vintage" gym shorts that were actually from an Australian Etsy shop. 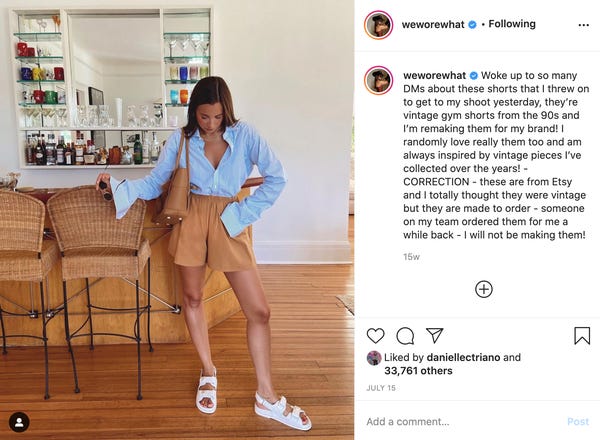 On July 15, Bernstein shared an outfit that featured a pair of "vintage gym shorts from the 90s." In her caption, the influencer said she was planning on "remaking" them for her WeWoreWhat line.

On July 30, Diet Prada shared an Instagram post claiming that the shorts were actually designed by an Australian Etsy shop called Art Garments. (The shop didn't respond to Insider's request for comment.)

The shop owner, Grace Corby, told Diet Prada that she found out about Bernstein's post after fans started tagging her shop in the influencer's post. According to Corby, she then realized Bernstein bought two pairs of Art Garments in November 2019.

Bernstein eventually amended her Instagram caption. In an Instagram highlight posted in August, she said she "sincerely thought that they were vintage as the shop I got them from primarily sells vintage items." 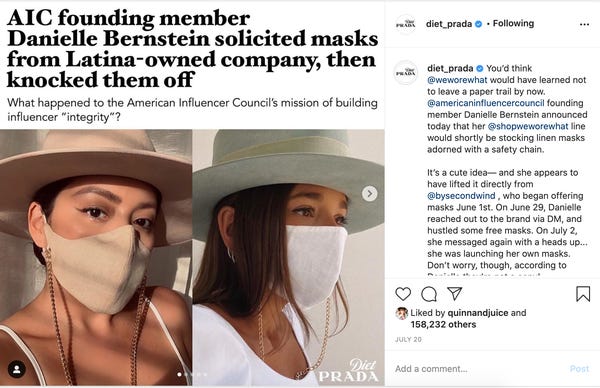 On July 20, Diet Prada highlighted yet another incident of alleged copying — this time, a mask and chain design.

According to the account, Bernstein reached out to Second Wind and its creator Karen Perez on Instagram and asked for samples on June 29, and then again on July 2 to say she was also releasing masks with detachable chains.

After Bernstein showed off her mask designs on Instagram, people were quick to point out the similarities.

Perez told Refinery29 the whole situation almost led her to quit her business. In a statement sent to Insider this week, she said: "How many times do we see high-end designers get knocked off by fast fashion brands? I was just never aware that it would happen to me so quickly."

After the controversy was covered by many outlets, Bernstein shared a message on her Instagram, saying that the accusations were "false," and that she would be donating her masks plus an additional 5,000 surgical masks to healthcare workers. She also deleted photos of the chained face masks from Instagram.

July 2020: Bernstein tested positive for the novel coronavirus while staying in the Hamptons. 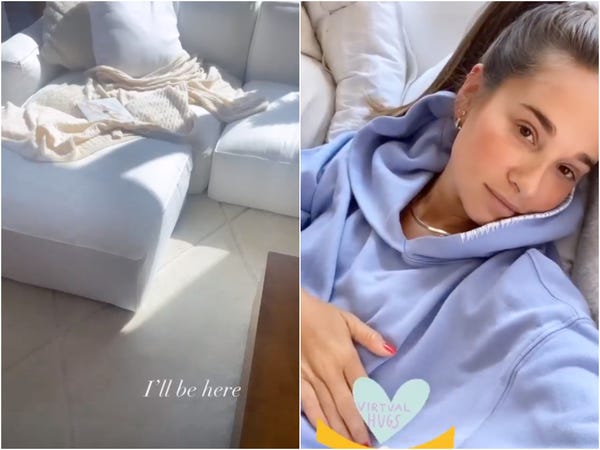 A source told Page Six that Bernstein was seen partying maskless in the Hamptons with around 35 to 40 people, and an Instagram page called @wedonttakecovidseriouslywhat criticized her for her behavior.

In early September, the influencer announced that she tested positive for COVID-19. Bernstein added that everyone she'd come in contact with had tested negative with the exception of her boyfriend.

Page Six reported Bernstein claimed she followed guidelines released by the Centers for Disease Control and Prevention for phase four of New York City's reopening. "Of course I could have been more careful and still got it… the virus is still very much here and I will be taking it even more seriously going forward," she said.

August 2020: Bernstein was criticized for showing her followers how to hide cellulite on social media. 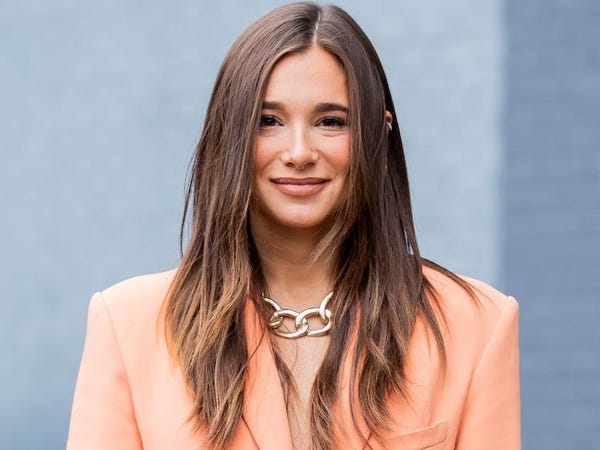 In August, the influencer shared two photos to her Instagram page: one of herself standing in the shade, and the other in the sun.

"The first has the sun behind me, so I'm back lit and it's more flattering. The second is direct sunlight which shows my cellulite," she wrote. "Both are beautiful," she wrote, but she wanted to share that "a quick 180 can dramatically change the look."

Her post circulated on Twitter days later. Many people were upset that an influencer with millions of young followers would teach others to "hide" their flaws.

Bernstein didn't respond to the criticism. She did, however, talk about her struggles with body image on Instagram the month prior after realizing "how impactful" editing her body in photos can be for her followers.

October 2020: Bernstein sued Brooklyn-based lingerie brand The Great Eros after the brand accused her of copying the design of its signature packaging. 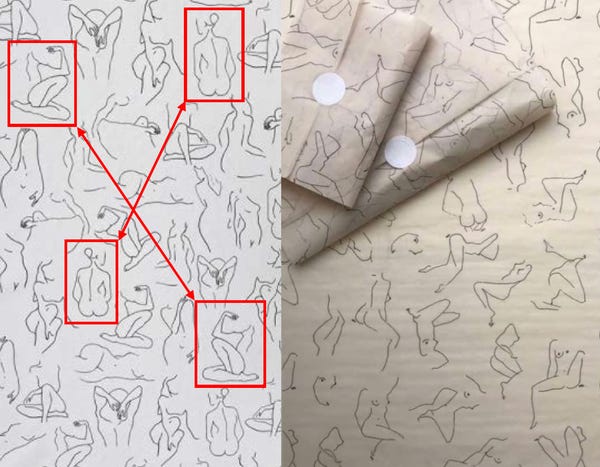 As Business Insider previously reported, Bernstein filed a lawsuit against Brooklyn lingerie brand The Great Eros after the brand claimed she copied the design of its signature tissue paper for a collection in the WeWoreWhat x Onia line.

In her lawsuit, Bernstein said that she was never gifted or purchased anything from the brand. The lawsuit also said an internal investigation showed her designers weren't familiar with the brand.

"At the end of the day, nobody wants to see anything bad or negative happen to anybody. What everybody is trying to say here is 'there are repercussions for these actions. You can't act like that without consequences.' I truly hope this is a wake up call for her and maybe she can change things around in a positive way," Jeff Gluck said, a lawyer for The Great Eros, told Insider.

"I want to clarify that I am ABSOLUTELY NOT seeking financial gain, what we are doing is simply asking the courts to confirm that we did not infringe on an alleged copyright," she wrote on Instagram Stories.

Bernstein wrote that WeWoreWhat's pattern was inspired by Matisse's line drawings, while "generally ubiquitous concepts, such as silhouettes of the human form" are not exclusive to any one individual or company.

"Danielle, you have become a bully. You may not be able to see it, but it's really bad," the brand wrote on its Instagram Stories on October 17.

On Wednesday, Bernstein's lawyer Robert Salame provided Insider with the following statement via email regarding the pending litigation:

"While we do not typically discuss settlement negotiations publically, because TGE has already made the terms of a previous settlement offer public, we can confirm that we offered TGE an opportunity to settle this litigation in a manner that would result in no financial loss to TGE. The settlement terms included a dismissal of the lawsuit, an agreement that no infringement occurred, providing TGE with information to support that no infringement occurred, a mutual non-disparagement agreement, and a waiver of WWW's and Onia's right to seek reimbursement of their legal fees (which have arisen only because TGE repeatedly threatened WWW and Onia with a lawsuit). TGE rejected the settlement offer so we are continuing the current path of seeking a judicial declaration that no infringement occurred."

The Great Eros' lawyer, Gluck, responded to the above statement on Wednesday:

"The Great Eros will never cower to this, and they will have their day in court. Period. Apparently, Ms. Bernstein wants to continue gaslighting people into believing that she is trying to resolve this in a fair way. People are smarter than that, and they see what she's doing."

As of this writing, the lawsuit is still pending.