The director of upcoming Netflix movie Cuties has revealed that she was sent death threats after the streaming site released a ‘hyper sexualized’ poster and trailer for the film that was slammed online – and prompted thousands of people to demand that the movie be pulled before its release date.

French film director Maïmouna Doucouré, 35, told Deadline that she faced a barrage of online abuse in the hours after Netflix unveiled its marketing materials for the movie – which, she says, were ‘not representative of the film and especially its message’.

‘I received numerous attacks on my character from people who had not seen the film, who thought I was actually making a film that was apologetic about hyper-sexualiation of children,’ she revealed. ‘I also received numerous death threats.’ 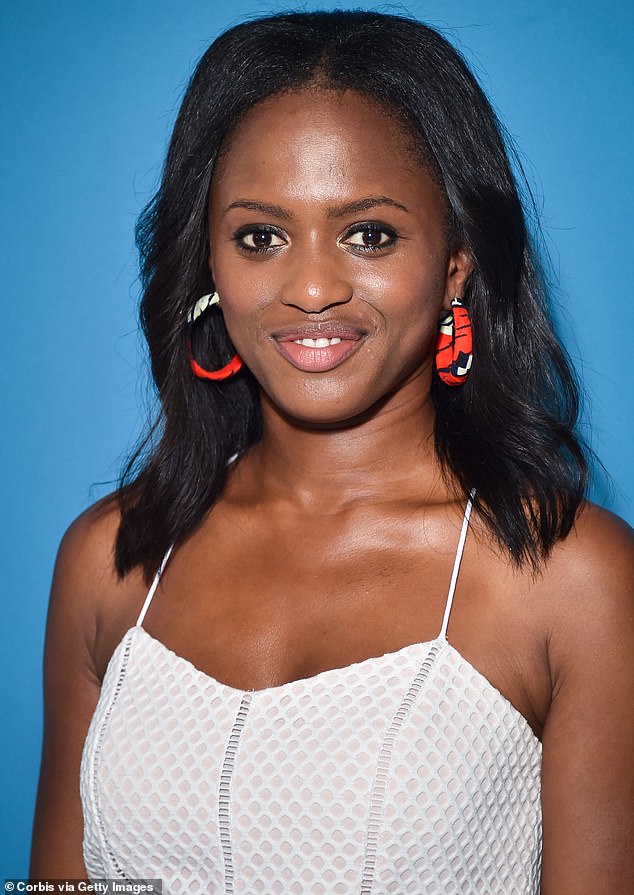 Under fire: Maïmouna Doucouré, the director of upcoming Netflix movie Cuties, has revealed she was sent death threats after a poster for the movie was slammed for ‘sexualizing’ minors 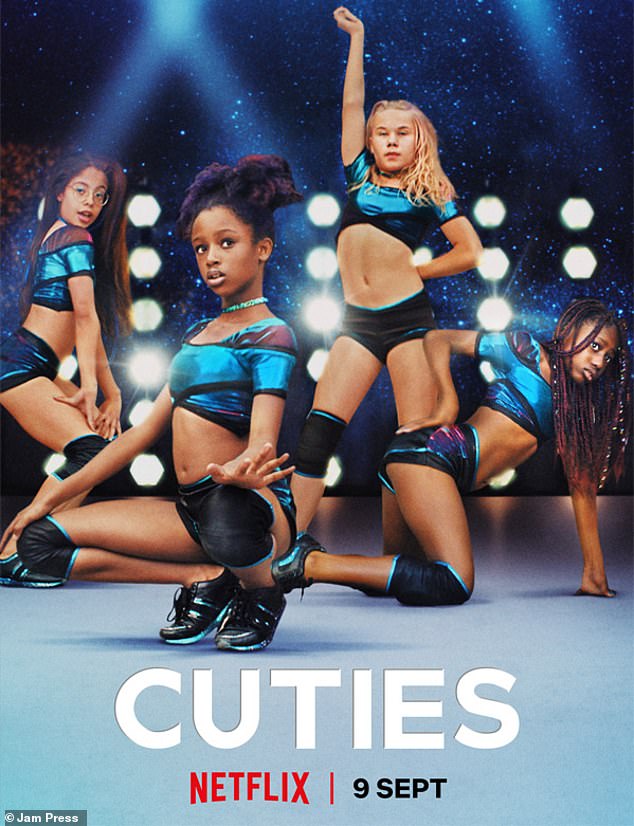 Outrage: Netflix sparked fury earlier this month when it released incredibly provocative imagery to promote the movie – including this image of young girls in hot pants and crop tops 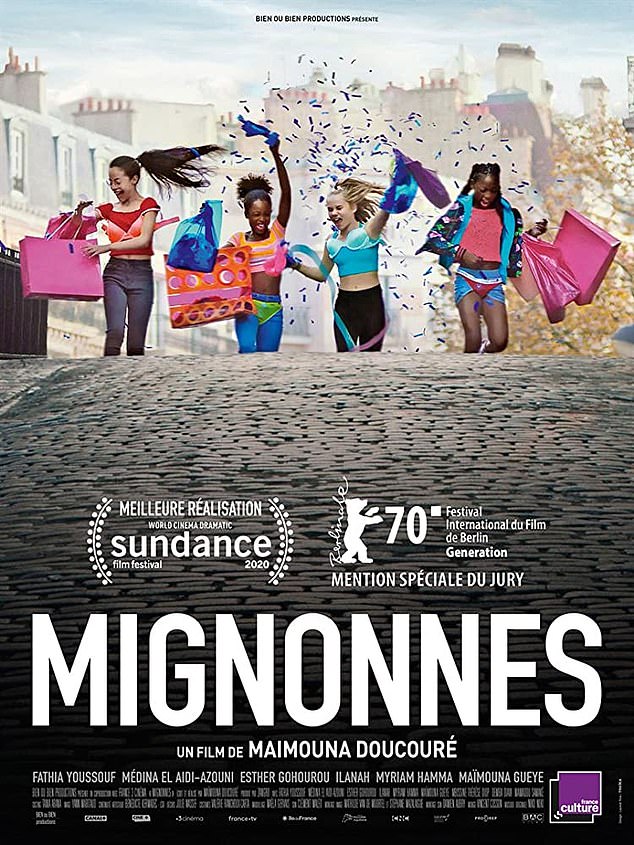 Innocent: Unlike Netflix’s poster, the original version depicted the youngsters on a shopping trip – prompting many to accuse the streaming site of purposely ‘sexualizing’ the stars 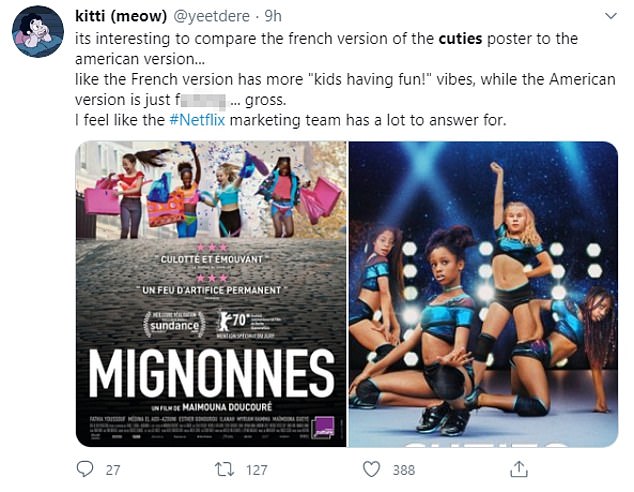 Upset: Many Twitter users highlighted the fact that Netflix was to blame for the provocative portrayal of the movie, but that didn’t stop its director Doucouré from being attacked online

The furious controversy erupted earlier this month when Netflix debuted a trailer and poster to promote the movie – which is due to premiere on the site on September 9 – prompting outrage from social media users who were left horrified by the ‘sexualized’ portrayal of its young stars.

Cuties, tells the story of an 11-year-old Senegalese Muslim girl named Amy, and, according to the director, it is meant to depict the struggle of ‘many children who have to navigate between a liberal western culture and a conservative culture at home’.

However, while publicizing the movie, Netflix chose to focus almost solely on Amy’s participation in her school dance team and their quest to ‘twerk their way to stardom at a local dance contest’.

The site’s trailer and poster featured imagery of pre-adolescent girls dancing provocatively in very skimpy outfits, while Netflix’s description of the movie centered around their ‘increasingly sensual dance routines’.

In stark contrast, the original poster for the movie – which has been used on other sites like IMDB – depicts the youngsters on a shopping trip.

Doucouré, who had not yet seen Netflix’s take on the poster, or its trailer, when the backlash began, was left stunned by the online response.

‘I discovered the poster at the same time as the American public,’ she explained.

‘My reaction? It was a strange experience. I hadn’t seen the poster until after I started getting all these reactions on social media, direct messages from people, attacks on me. I didn’t understand what was going on.

‘That was when I went and saw what the poster looked like.’

Cuties tells the story of an 11-year-old Senegalese Muslim girl named Amy, who joins a school dance team and takes part in a ‘twerking competition’, upsetting her mother and going against her family’s strict religious beliefs.

According to Doucouré – and several film critics – it is meant to offer commentary on the dangers of society sexualizing its youth, however that message was completely lost in translation thanks in large part to Netflix’s ‘hyper-sexualized’ depiction of the film and its young stars.

But while the streaming site accepted full responsibility for the blunder – and quickly issued an apology for any offense caused – the damage was already done, with both Doucouré and her movie facing furious attacks from thousands of outraged viewers.

‘We’re deeply sorry for the inappropriate artwork that we used for Cuties,’ a Netflix spokesperson said in a statement at the time.

‘It was not OK, nor was it representative of this French film, which premiered at Sundance. We’ve now updated the pictures and description.’

Doucouré also received a phone call from the streaming site’s co-CEO Ted Sarandos, who made a personal apology for the error, she revealed.

‘We had several discussions back and forth after this happened. Netflix apologized publicly, and also personally to me,’ the director shared.

Following the backlash, Netflix withdrew its poster, and changed its description of the movie on its site – however not before more than 20,000 people signed a petition to stop the film from ever being put up.

Before being changed, Netflix’s official synopsis read: ’11-year-old Amy lives with her mom, Mariam, and younger brother, awaiting her father to rejoin the family from Senegal.

‘Undeterred by the girls’ initial brutal dismissal and eager to escape her family’s simmering dysfunction, Amy, through an ignited awareness of her burgeoning femininity, propels the group to enthusiastically embrace an increasingly sensual dance routine, sparking the girls’ hope to twerk their way to stardom at a local dance contest.’

Some Twitter users were quick to point out that the marketing materials used by the streaming site were much more risque than the original French versions, with the Netflix poster showing the girls posing provocatively while wearing crop tops and hot pants, while the original offering featured the youngsters on a shopping trip.

‘I feel like the #Netflix marketing team has a lot to answer for.’

Another person called out the fact that even Netflix’s blurb about the movie fails to highlight Cuties’ main storyline – instead choosing to focus solely on its young star’s ‘fascination with twerking’.

‘The thing about the Netflix campaign for Cuties is how disgustingly sexualized these girls are,’ the person wrote.

‘Compare the poster and blurb from Netflix versus the ones on IMDb, s**t is as different as night and day. Someone should get fired.’

The Netflix blurb shared by the user read: ‘Amy, 11, becomes fascinated with a twerking dance crew. Hoping to join them, she stars to explore her femininity, defying her family’s traditions.’

However, on IMDB, the movie blurb doesn’t include any mention of twerking, instead detailing: ‘Amy, an 11-year-old girl, joins a group of dancers named “the cuties” at school, and rapidly grows aware of her burgeoning femininity – upsetting her mother and her values in the process.’

Even Wikipedia highlights the movie’s social commentary, with the site’s movie description pointing out how Cuties is intended to raise concerns about the impact internet culture can have on pre-adolescent girls.

‘The film is based on a traditional Senegalese Muslim girl who is caught and torn between two contrasting fortunes, traditional values and internet culture while also speaking about hyper sexualization of pre-adolescent girls,’ the description says.

Accusations: One Twitter user pointed out the fact that Netflix appears to have purposely emphasized the more provocative aspects of the movie in its marketing materials 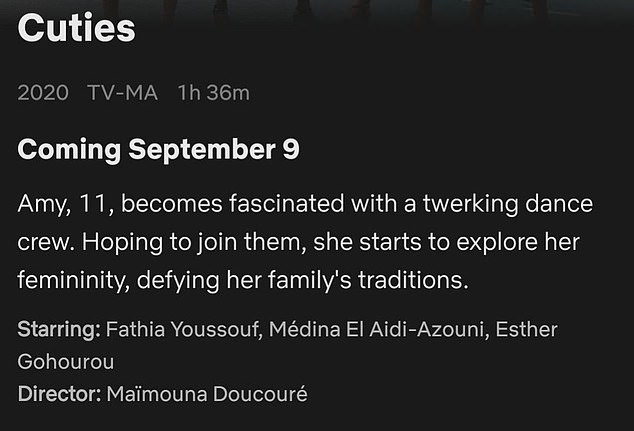 Provocative: The Netflix blurb also focuses on the more sexualized aspects of the movie, describing how an 11-year-old becomes ‘fascinated with twerking’

Contrast: On IMDB, the movie’s description doesn’t mention twerking, and instead talks about how Amy’s decision to join the Cuties upsets her mother and her values 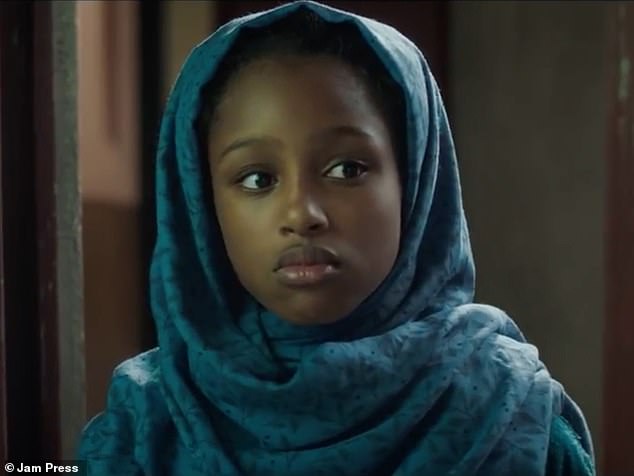 Difference: Even Wikipedia highlights the movie’s social commentary, with the site’s movie description noting that Cuties is meant to raise concerns about the impact of internet culture

Message: ‘The film is based on a traditional Senegalese Muslim girl who is caught and torn between two contrasting fortunes, traditional values and internet culture,’ Wikipedia states

In the wake of the furious backlash, Netflix issued a swift apology, confirming to Deadline that it removed the ‘inappropriate artwork’ used to promote the movie, while also updating the film’s blurb on its website.

The blurb on the Netflix website no longer contains any mention of twerking, and instead highlights central character Amy’s ‘rebellion’ against her family’s strict ethos.

‘Eleven-year-old Amy stars to rebel against her conservative family’s traditions when she becomes fascinated with a free-spirited dance crew,’ it reads.

The trailer still does not appear to have been edited or changed however.

In the Cuties trailer, which was posted on the official Netflix YouTube account on August 18, Amy – who is portrayed by 11-year-old newcomer Fathia Youssouf – is seen trying to balance her strict religious upbringing with her newfound friend group, all of whom are shown acting and dressing in an overtly mature and sexual way.

A once-shy Amy is seen growing in confidence – dressing more provocatively, acting against her mother’s wishes, and eventually stealing money to fund a shopping trip for her and her friends.

At times the tween stars are seen acting like the young girls they are, giggling, having fun and playing – however these scenes are mixed in with clips of the girls practicing overtly sexual dance moves and experimenting with provocative poses. 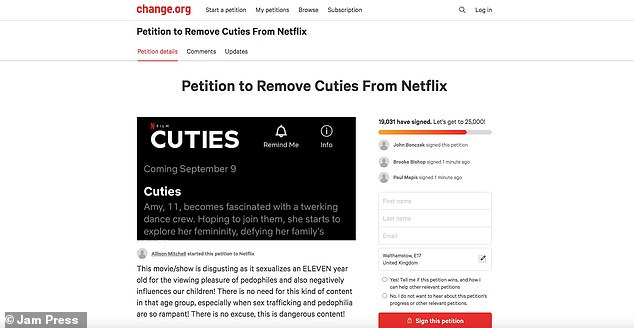 Concerns: An online petition to have the movie removed from Netflix has received tens of thousands of signatures

‘Shame on you Netflix’: Social media users were left horrified by the trailer, in which a group of tween girls are seen dancing provocatively in skimpy outfits

Towards the end of the trailer, the four young stars are seen in what appears to be their final dance performance, for which they don incredibly skimpy outfits – metallic crop tops and tight spandex hot pants – before twerking and body rolling in front of a panel of adults.

However, while some chose to call out Netflix’s portrayal of the movie, others insisted that the incredibly mature content of Cuties is the issue.

Audiences have started a petition to have Cuties removed from Netflix, which has received almost 20,000 signatures.

Others have shared their outrage on social media, with dozens of Twitter users voicing fury about the sexual nature of the movie – and Netflix’s decision to promote Cuties through provocative imagery.

Another added: ‘I’m all for discussing those import[ant] issues, but we don’t have to sexualize young girls to discuss the sexual of young girls. Too much of it happening for real. No need to have it happen for fake.’

The film was directed by Maïmouna Doucouré, a French-Senegalese screenwriter and filmmaker. Maïmouna received the Directing Award for ‘Cuties’ at the prestigious Sundance Film Festival.

Related posts:
The Handmaid’s Tale season 4: Nick Blaine ‘rescues’ Hannah as deleted scene unearthed
Prince Harry’s cousin Princess Eugenie was one of the first people to know about his romance with Meghan Markle
Popular News
Dan Walker unveils BBC cushion secret before issuing breakfast threat: ‘Don’t you dare’
19/09/2020
Man Utd wonderkid Ramon Calliste, called ‘the next Giggs’, now owns luxury watch business and makes £5m a year – The Sun
26/03/2020
Megan Thee Stallion Addresses Criticism Over Twerking: ‘I Love to Shake My A**’
26/03/2020
Police guard shops to stop coronavirus panic-buyers and enforce social distancing – The Sun
26/03/2020
Coronavirus: Good Morning Britain’s Dr Hilary reveals ‘game-changing’ self-testing kit
26/03/2020
Recent Posts
This website uses cookies to improve your user experience and to provide you with advertisements that are relevant to your interests. By continuing to browse the site you are agreeing to our use of cookies.Ok