A backyard slaughterhouse operating on the outskirts of Melbourne has sparked fears of cruel practices and potential COVID-19 outbreaks after undercover footage surfaced of sheep being butchered inside a garage.

In part of the footage, four people and animals, including rats and kittens, can be seen coming and going from the makeshift slaughterhouse floor as one sheep appears to take more than five minutes to die, thrashing its tethered legs as it lay on its back in a metal cradle without first being stunned. 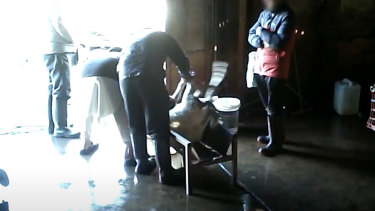 The animal's head hangs over a plastic bucket, then the carcass is hung from the ceiling and butchered as a young child runs past.

The property at Koo Wee Rup, 63 kilometres south-east of Melbourne, was the subject of complaints to the agricultural department in July last year but animal welfare advocates say it has continued to operate.

Animal Justice Party MP Andy Meddick, who made an initial complaint about the property in 2019, said the latest footage taken last week was "deeply concerning" and raised both animal cruelty and biohazard issues.

He said with industry abattoirs currently facing tight restrictions and partial shutdown orders due to COVID-19 lockdown measures, it had also raised fears of an increased demand for the illegal underground meat trade. 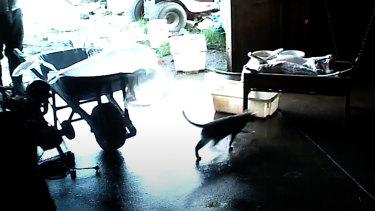 “In the footage I have viewed, there is no adherence to biosecurity measures, there are gross breaches to animal welfare, and evidence of cross-contamination posing serious risks to human health,” Mr Meddick said.

“We are living in a time when legally operating slaughterhouses and abattoirs poses a unique threat to the community, being hotspots for the spread of coronavirus.

“Allowing an already illegal operation with no extra safety protocols or hygiene standards to continue during a crisis like this is irresponsible and alarming.”

Animals must be stunned, rendering them unconscious, before being killed, he said.

An Agriculture Victoria spokeswoman confirmed it was investigating the footage.

“As the matter is an active investigation it is inappropriate to comment further,” they said.

PrimeSafe, the Victorian food safety regulator of the meat and seafood industries, said it would work with the investigation.

PrimeSafe said all meat produced for human consumption and sale in Australia was required to come from livestock slaughtered at a licensed abattoir where compliance with Australian standards for food safety and animal welfare are monitored by government regulators.

The Victorian Meat Industry Act prohibits the slaughter of livestock other than at an abattoir to produce meat for sale, but does allow farmers to slaughter their own livestock on their farm for private consumption at home. Meat from these animals is not permitted to be sold or to leave the property, they said.

In those instances, farmers remain responsible for the human health risks and processes for the on-farm slaughter of their livestock, according to the act.

Animal rights campaigner and Farm Transparency Project founder Chris Delforce said his members recently returned to the Koo Wee Rup property as they feared the operation was continuing a year after initial complaints were raised.

“It's been a year since this facility was first reported, and nothing has changed; animals are still being slaughtered while fully conscious, suffering for minutes before they die, while biosecurity and hygiene issues are rampant,” Mr Delforce said.

The regulated meat industry has been a major source of COVID-19 outbreaks this year, prompting Premier Daniel Andrews to this week move to slash the operations of Victorian abattoirs by a third as Melbourne entered stage four and regional Victoria stage three lockdown.

Beef, lamb and pork processing plants and abattoirs must reduce operations to two-thirds, while poultry producers will operate at 80 per cent capacity.

It saw the Premier issuing warnings against panic buying meat which he said would worsen the state's supply.

Of the state's highest clusters of active infections, the top three were all from the meat industry.

Other cases in the top 10 key outbreaks include 83 cases connected to Australian Lamb Company in Colac and 38 cases associated with Golden Farms Poultry in Breakwater.

The latest figures follow a major outbreak at Cedar Meats in May where more than 100 cases were later linked to the Brooklyn site.

Other meatworks then temporarily shut plants while staff were tested, including Don KR in Castlemaine where 1300 workers were forced into isolation while awaiting test results.

In the US, nearly 40,000 meat-packing workers have contracted COVID-19, while there have been major outbreaks in plants across Latin America and Europe.