Home » Lifestyle » Craig Kelly: Liberated from being a Liberal, what will he do now?

Craig Kelly: Liberated from being a Liberal, what will he do now?

Craig Kelly has been no stranger to headline writers over the past decade as he spoke out on issues ranging from Russia’s involvement in the downing of flight MH17 to Donald Trump and the need for coal power. But it was his incessant Facebook posts about supposed COVID-19 treatments not backed by medical authorities and questioning of the vaccine program that brought him into conflict with the government’s leadership, ultimately leading to his quitting the Liberal Party this week. 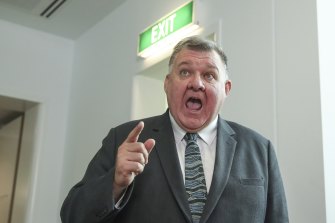 Kelly was first elected to represent Hughes, an electorate covering suburbs and semi-rural areas on the southern and south-eastern outskirts of Sydney, in 2010. His seat neighbours Prime Minister Scott Morrison’s electorate of Cook and encompasses much of the Sutherland Shire, Liverpool and the Royal National Park.

Kelly noted in his first speech to Parliament his seat was named for former prime minister Billy Hughes, who “changed parties no less than five times”. 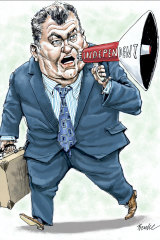 “[Labor MPs] are always welcome to come across and join us should they see the light,” he said.

At the time, he’d been a member of the Liberals for less than a year. “I owe my presence here today to the democratic traditions of the Liberal Party,” he said.

Since then, Kelly has been saved twice in preselection battles by prime ministerial intervention, first by Malcolm Turnbull in 2016 and again by Morrison ahead of the 2019 election. During the second preselection fight, Kelly invoked Robert Menzies as his reason for joining the Liberals and told reporters he’d assured Morrison he wouldn’t defect from the party.

Despite the support from Turnbull, Kelly voted for Peter Dutton in the August 2018 leadership spill that ultimately led to Morrison becoming prime minister.

Kelly also used his first speech to raise the “unsung group of heroes” who were, like him, parents and carers of children with disabilities. His son Trent, now 24, was born with Down syndrome and autism and has no speech.

What does he do?

Kelly has risen to public prominence most notably for his opposition to climate action and support for coal-fired power. Although he declared in his first speech to Parliament “I consider myself an environmentalist”, he may well be the only person who does.

In 2018 he chaired the Coalition’s backbench policy committee that effectively killed off the national energy guarantee because of its aim in part to cut emissions. Around the same time, Kelly was part of the Monash Forum group of MPs actively pushing for new coal-fired power stations.

British television presenter Laura Tobin accused him on air of being a climate denier in January 2020, after he said people drawing a link between the summer’s horrific bushfires and climate change were just playing politics.

He’s also a prolific user of Facebook, frequently appearing in the top five in statistics of politicians with the most interactions on their posts. Or he was, until Facebook slapped him with a temporary ban last week for spreading misinformation about COVID-19. His outspokenness had caused growing agitation among Liberal colleagues, with one dubbing him the “Pete Evans in the party room” in reference to the anti-vaxxer celebrity chef. Days after this comment was reported, Kelly appeared on Evans’ podcast.

Kelly has vowed to resume his social media campaign to promote unproven coronavirus treatments, despite warnings from medical experts and the Australian Medical Association.

This spruiking for alternative treatments led to Morrison reprimanding Kelly after a public clash with Labor’s Tanya Plibersek in the first sitting week of the year.

But he insists he’s on board with the government in urging Australians to have either the Pfizer or AstraZeneca coronavirus vaccine. “I want to make sure there’s no doubt: I’m not an anti-vaxxer,” he told this masthead.

What did he do this week?

On Tuesday, Kelly blindsided Morrison and his colleagues by standing up in the party room meeting of all Liberal and National MPs and announcing he was quitting to sit as an independent.

He recalled an analogy Morrison is fond of using about New Zealand’s America’s Cup defence where the only consideration for the team was what would make the boat go faster.

“I acknowledge that some of my conduct over recent months has not helped the boat go fast,” Kelly said in his resignation statement. He had decided that in order to continue to “speak fearlessly” and act in line with his conscience and principles, he had to resign as a member of the Liberal Party.

Of course, it would have also been playing on his mind that his preselection was yet again under threat. A number of challengers had emerged, including Kent Johns, who had prepared to run against Kelly twice before.

Kelly has also been under pressure to sack his long-time adviser, Frank Zumbo, after reports about a restraining order made against him by a young woman. Morrison said Kelly had known “for many years” the Prime Minister didn’t think he should be employing Zumbo.

But Kelly is standing by his man. “I would not be here without your friendship and advice,” Kelly told Zumbo in Parliament back in 2010, and this week he again refused to sack him.

Why is this important?

The government has effectively lost its majority in the lower house – although it now has 76 MPs out of 151, one of that number, Tony Smith, is the Speaker and doesn’t vote except in instances of a tie. “There are actually 75 there and 75 here,” Opposition Leader Anthony Albanese pointed out helpfully during question time on Wednesday.

Kelly has pledged to support the government on matters of supply and confidence and continue to back policies the Liberals took to the 2019 election. 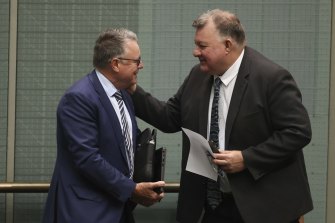 That leaves his position on any new or changed policies open, along with the potential for parliamentary mischief by Labor – or other freelancing Coalition backbenchers, such as Barnaby Joyce – to embarrass Morrison. Joyce signalled before Kelly’s defection he wants to amend legislation on the government’s green bank to allow it to fund coal power.

For now, Kelly has tamped down the likelihood of his backing Labor, saying: “There’s probably as much chance of that as chewing my arm off.”