COVID-19 vaccination on track to start in February: Scott Morrison

Australia could start vaccinating vulnerable groups of the population next month, Prime Minister Scott Morrison has revealed, saying approvals for the Pfizer vaccine were hoped to be finalised by the end of January.

After pressure from the federal opposition and some scientists to speed up the process, Mr Morrison said he was hoping to receive data from Pfizer this month to allow the vaccine's approval and the aim would be to vaccinate 80,000 people each week to begin with, and for that to build over the next four to six weeks. 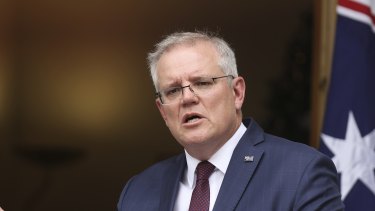 "We are now in a position where believe we will be able to commence vaccinations of [vulnerable groups] in mid to late February," he said.

By the end of March, four million people could be vaccinated.

"That is a target, that is what we are working to," Mr Morrison said.

That timeframe will be dependent on Therapeutic Goods Administration approval and the delivery of the vaccine from suppliers.

"Vaccination in 2021 is a key component of how we're dealing with the pandemic here in Australia," he said.

Secretary of the federal Health Department, Professor Brendan Murphy, repeated the country's goal is to administer four million doses of COVID-19 vaccines by the end of March.

The government aims to register the Pfizer vaccine later this month, and the Oxford-AstraZeneca vaccine in February.

Thirty to 50 hubs across the country will be established to administer the Pfizer vaccine. The two vaccines will eventually be administered from different hubs. Their locations will be determined by the states and territories, in partnership with the Commonwealth.

"Assuming all those things go well, in mid to late February we can start our phase one rollout," Professor Murphy said.

This will be for the priority group, and they will receive the Pfizer vaccine: quarantine and border workers, health care workers, aged care staff and aged care residents.

When the Oxford-AstraZeneca vaccine is available, there will be "significantly" more doses available as it will be manufactured on shore, guaranteeing a supply line.

"That will enable a rapid rollout. We will expand that to a significantly broader range of the at-risk population," Professor Murphy said.

That includes those of advanced age, Indigenous Australians, those over 55 at higher risk of disease, other people with clinical conditions that make them at higher risk, and other high-risk workers more likely to be exposed to COVID-19.

"By the end of March we hope to have at least four million doses, and then we will ramp up further and expand to the population more broadly," he said.

Related posts:
What Is Eminem’s Ex-Wife Kimberly Anne Scott Doing Now?
The 13 Best Winter Nail Colors to Elevate Your Manicure
Popular News
Duchess Meghan’s dogs have been a big ‘support’ during the pandemic year
28/01/2021
Man Utd wonderkid Ramon Calliste, called ‘the next Giggs’, now owns luxury watch business and makes £5m a year – The Sun
26/03/2020
Megan Thee Stallion Addresses Criticism Over Twerking: ‘I Love to Shake My A**’
26/03/2020
Police guard shops to stop coronavirus panic-buyers and enforce social distancing – The Sun
26/03/2020
Coronavirus: Good Morning Britain’s Dr Hilary reveals ‘game-changing’ self-testing kit
26/03/2020
Recent Posts
This website uses cookies to improve your user experience and to provide you with advertisements that are relevant to your interests. By continuing to browse the site you are agreeing to our use of cookies.Ok