A married couple who tied the knot at the ‘height of COVID’ have revealed how they then sold their house and almost all of their possessions to move into a van – just a few months after becoming husband and wife.

Ben Landheer, 29, from Charlotte, North Carolina, first met his wife Malory, 25, at the church they both attended in March 2015. The pair both worked in ministry; Ben was a guest experience director and Malory was a missionary, however in their spare time, the couple loved nothing more than hiking, travelling and spending time with family.

Ben and Malory were both interested in pursuing a lifestyle where they could live at a slower pace, have the ability to explore more of their home country and visit their friends and family who were dotted around the United States – and it was through this desire that they discovered van life. 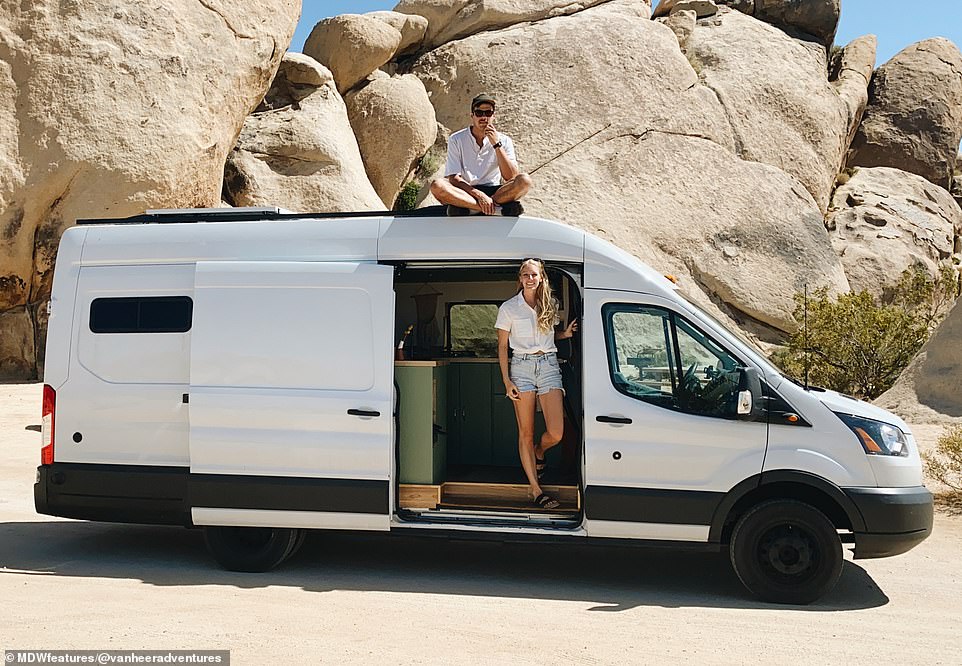 On the move: Ben Landheer, 29, and his wife Malory, 25, have revealed how they moved into a van just months after tying the knot in order to pursue their shared love of travel and spending time in nature 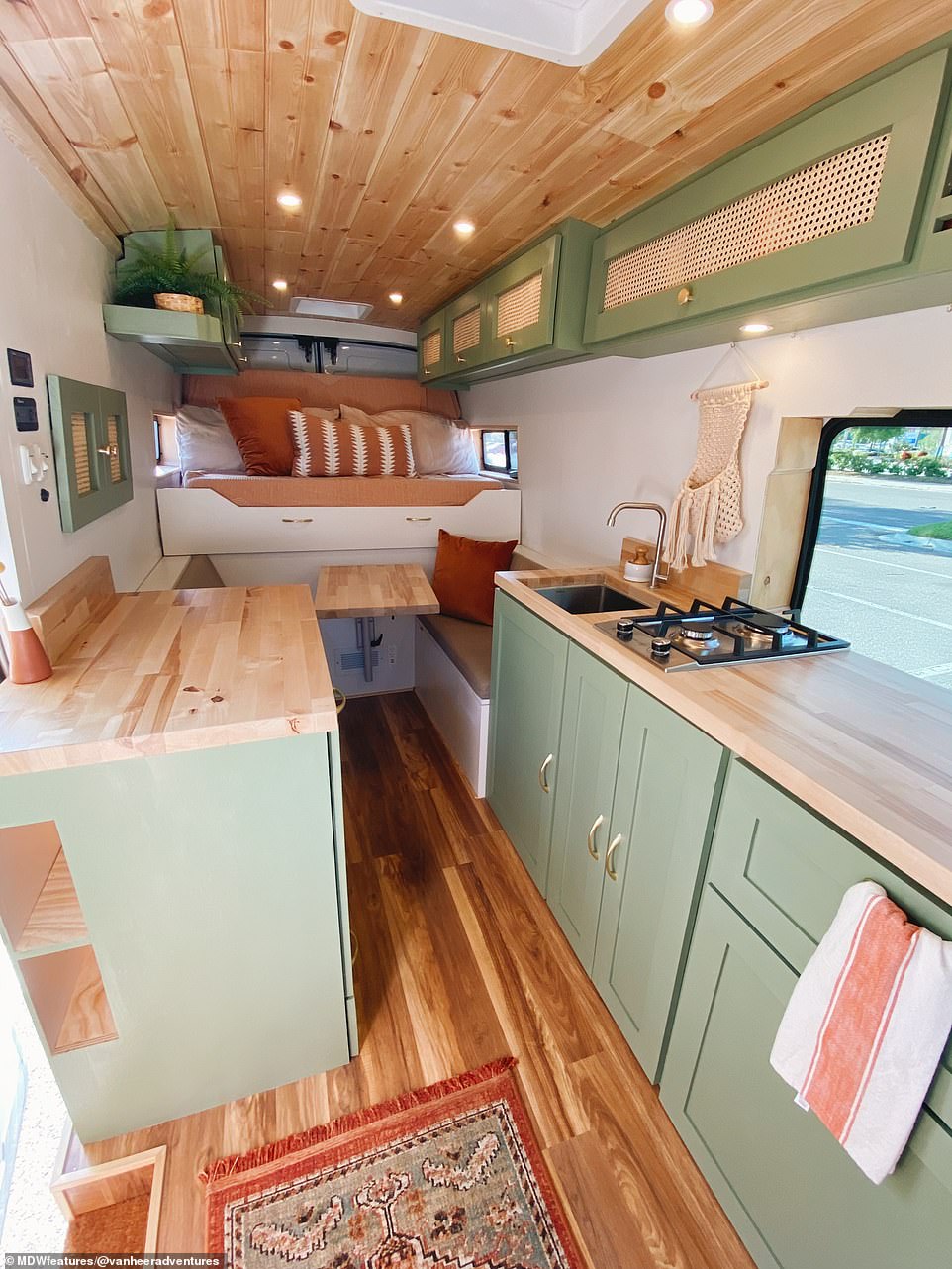 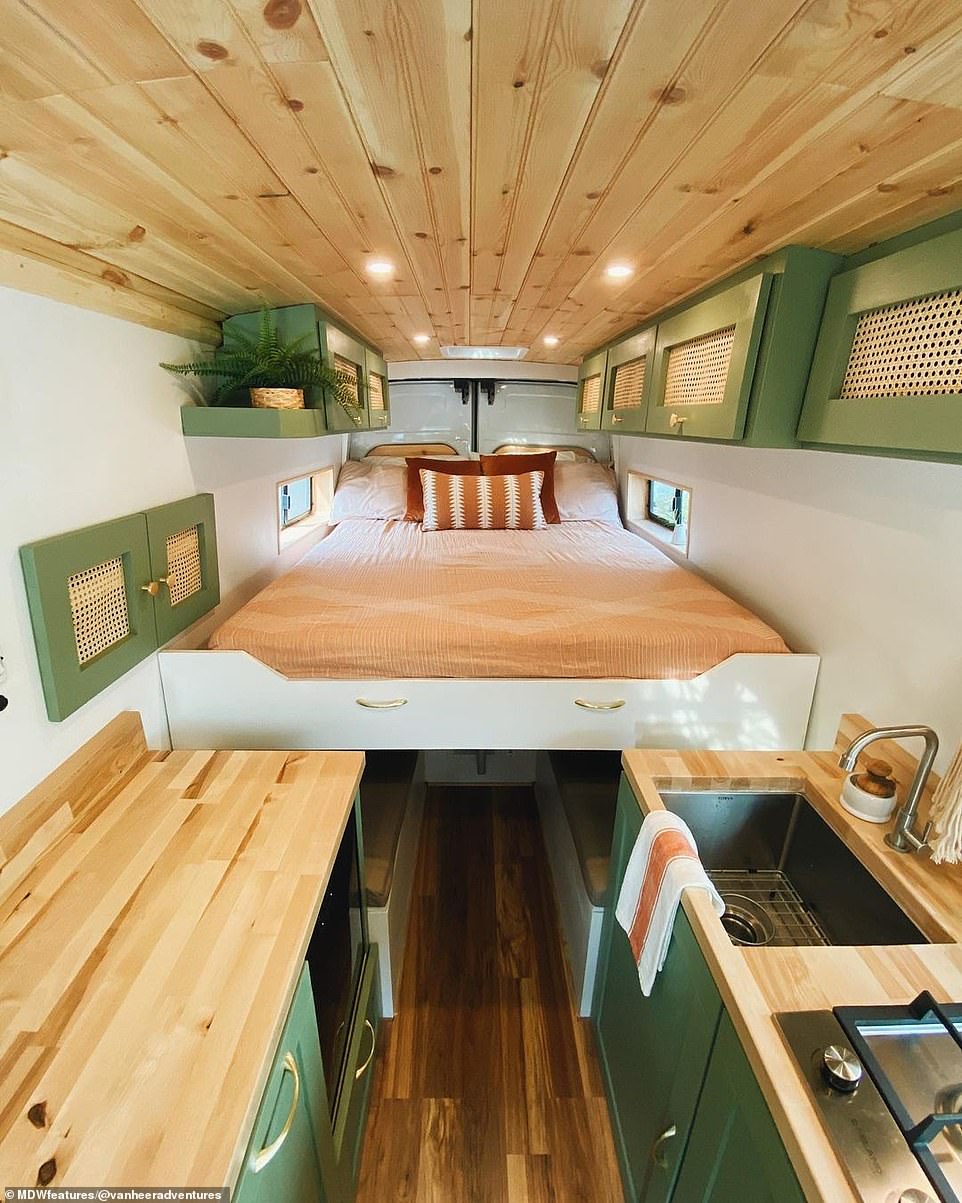 Stylish: Ben and Malory focused on space-saving storage solutions in order to make the most of their small living quarters – and installed several clever additions, like a bed that pulls out over their dining area 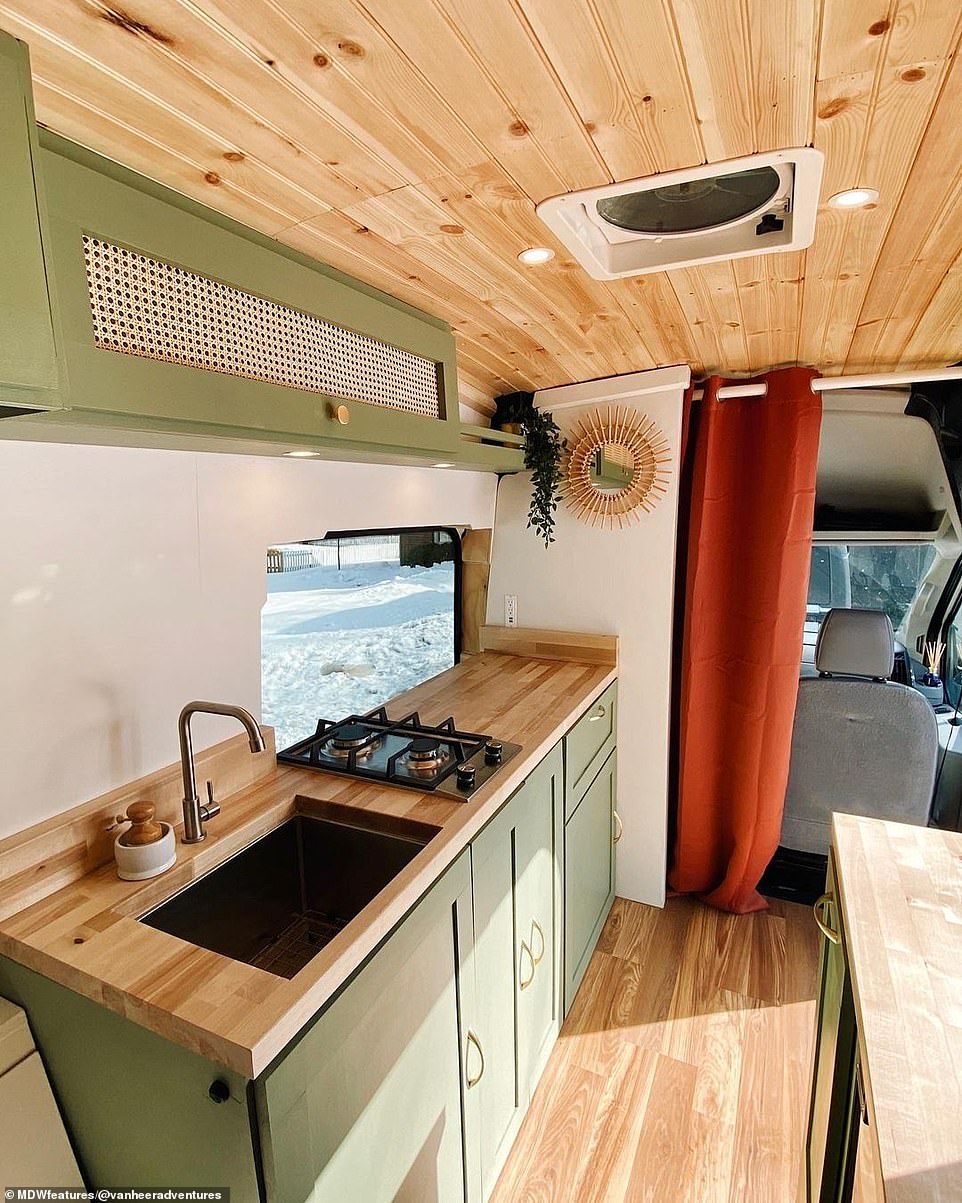 Impressive! The pair did all of the work on the van themselves, using knowledge that they retained from high school woodwork classes and skills that they learned from watching YouTube videos

In February 2020, Ben and Malory decided to sell their house and saved $60,000 so that they could live the van life for a year. The couple knew the CEO of an insurance adjusting company who agreed to pay them monthly in exchange for them having the logo of his company on the van. Malory also does some remote work from her previous job whilst on the road. 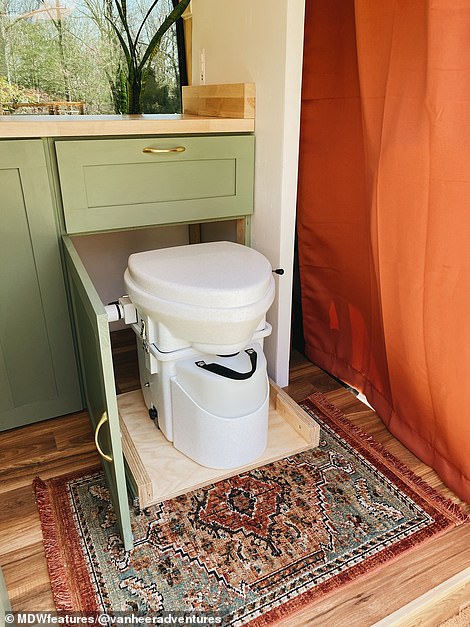 Hideaway: They have a toilet in their van, which slides back into a closet when not in use

Ben and Malory spent $13,500 and four and a half months on their van build, fitting windows, doing the plumbing and electrics, and fitting all cabinets themselves – using YouTube videos and their own high school woodwork classes as the base of their knowledge.

The couple never wanted to feel claustrophobic in their van and so prioritized storage to maximize the space available to them.

Ben and Malory have been on the road since March 23, 2021, starting off in North Carolina, travelling down the West Coast and are currently located in San Diego, California.

The husband and wife say that living the van life has taught them to focus on what really matters in life and living at a slower pace has eliminated their stress and anxiety levels. Whilst they aren’t setting a timeframe on their travels, they hope to enjoy this freeing lifestyle for at least a year, hopefully more.

‘We did the build 100 per cent by ourselves with no outside help,’ said Ben.

‘We installed and built it all, including the windows, solar, plumbing, cabinets and electrical. We simply followed other build videos and referred back to a little high school woodwork training.

‘Space and storage were everything for us. We never wanted to feel cramped and claustrophobic.

‘On certain days, it can get hard, but we know how to give each other space. More than anything it has helped us get to know each other better and on a much deeper level.

‘But at the end of it all, we get to experience new places and people with our life partner – what more could you ask for?

‘We have no direct travel path. We choose from day to day where we want to go. That is the freedom this life gives you.

‘Typically, we wake up, make breakfast, see if we need to empty water, pick up food, get in the sun to charge solar, then we decide where we want to go next and explore that area.

‘We find Wi-Fi if we need to and we stop and shower at a Planet Fitness if need be, but other than that it changes from day-to-day.

‘The biggest thing we’ve learnt and benefitted from is pace. Learning to slow life down is so good.

‘Anxiety levels and stress go from a nine to a one. You learn to focus on what really matters in life. The little things. Loving people. Experiencing each day fully – and spending a lot more time in nature.’ 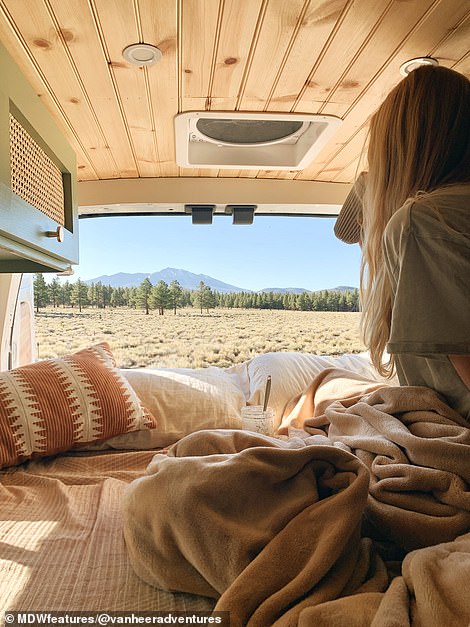 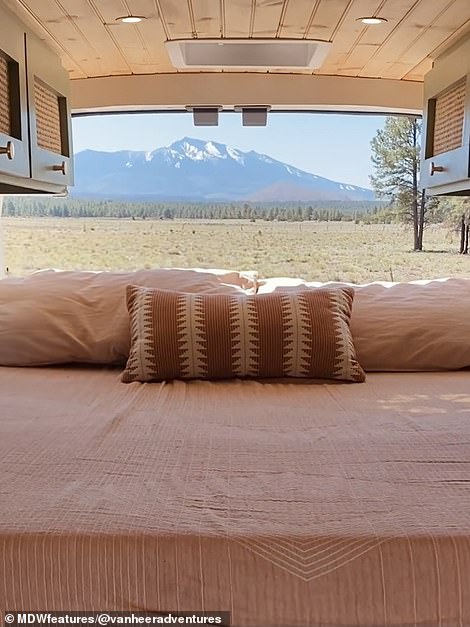 Relaxation: The couple initially planned to live in their van for a year, however they are enjoying the lifestyle so much that they both say they’d love to keep doing it for longer 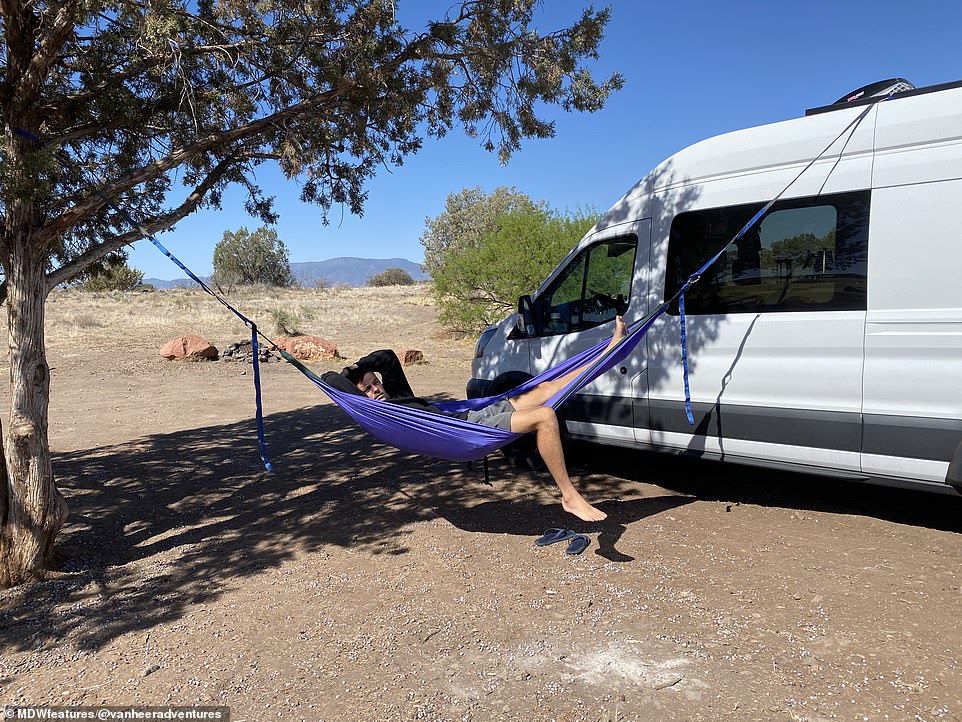 Taking it easy: Before buying their van, the couple sold their home and saved up $60,000 which has allowed them to take time away from work 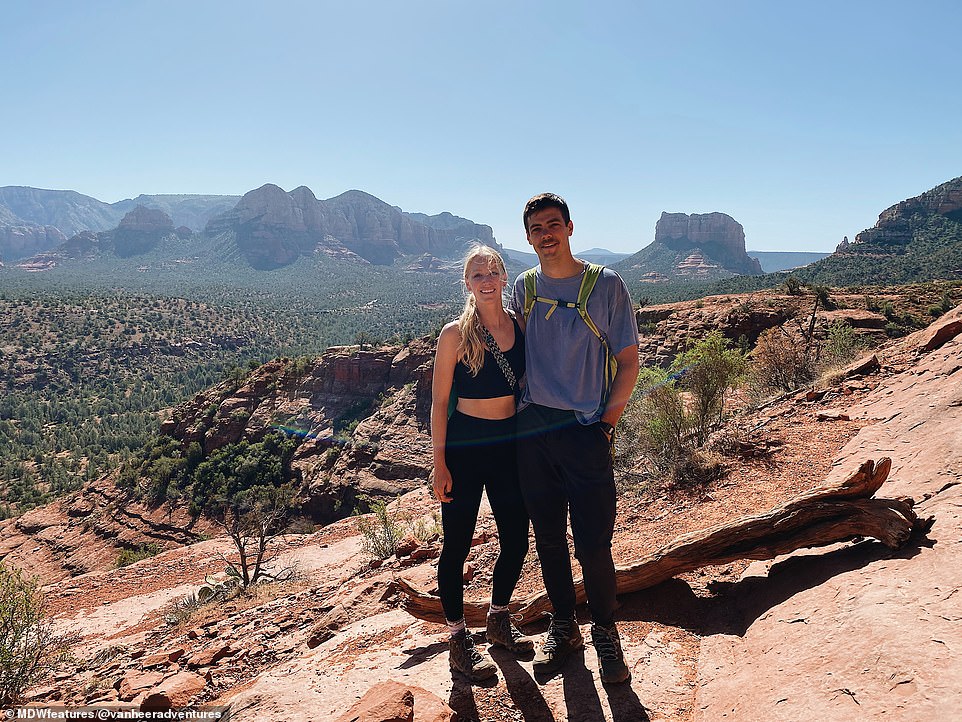 Picturesque: The couple’s favorite place they’ve visited so far has been Flagstaff, Arizona, because it is in between the Grand Canyon and Sedona 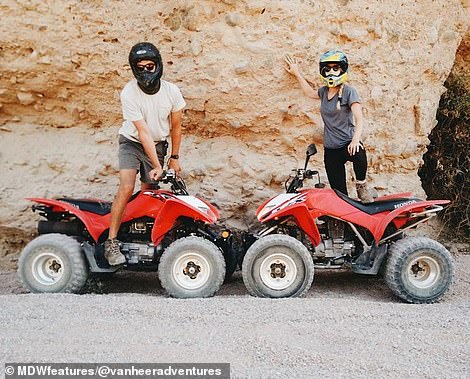 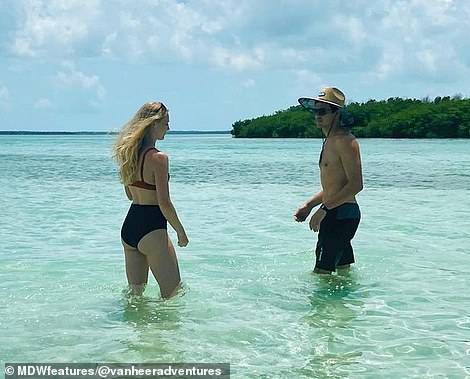 Lessons: ‘The biggest thing we’ve learnt and benefitted from is pace. Learning to slow life down is so good,’ Ben said

The couple’s favorite place they’ve visited so far has been Flagstaff, Arizona, because it is in between the Grand Canyon and Sedona.

They are currently travelling along the coast of California and after that intend on zig-zagging their way through the country, stopping off at all of the national parks on the way.

Ben and Malory share their adventures on Instagram so that their loved ones can see what they are getting up to.

‘We knew we wanted to share it with friends and family from back home, but we did not want to use our personal accounts,’ said Malory.

‘We figured, why not start something with the sole purpose of showcasing what it’s like to live in a van.

‘We’ve received only love and support. It’s been a really cool community of people to build relationships with.

‘We love the life we are living, so when people encourage and support it – it only multiplies it. Specifically, the build. Knowing that people love what we put so much time and effort into is a huge boost of encouragement.

‘If you want to do this life – jump off the deep end, save up the money, make the arrangement, create some benchmarks for yourself and make it happen.

‘All of a sudden this crazy dream won’t seem too far away.’