Couple bring 1970s house up to date with stunning renovation

Couple spend £35,000 transforming an ugly 1970s house with a 30-year-old boiler, urine-rotted floorboards and tiles on the ENTIRE ground floor into a stunning five-bed family home

A couple with a passion for interior design have lifted the lid on what it’s really like to transform a whole house, proving renovations are not for the faint-hearted – revealing they were greeted with terracotta tiles throughout the ground floor, urine-rotted floorboards in the bathroom and needed ‘skip after skip’ to sort out their new home.

Hannah and Berran Hooper paid £370,000 for a five-bedroom family home in Wantage, Oxfordshire last year, and have spent the time since unlocking its potential, performing a stunning, whole-house transformation.

However, the couple, who’d changed kitchens and bathrooms on previous properties but had never tackled a full renovation, have revealed just how much work has gone into turning their house into a stylish family abode, sharing their story on their Instagram account, Old and tired to chic and inspired.

They’ve spent £35,000 so far, with the kitchen still to do, but a new boiler, double-sided log burner and garden makeover are among the alluring features that would probably see them rake in around £15,000 in profit already if the house went back on the market now. 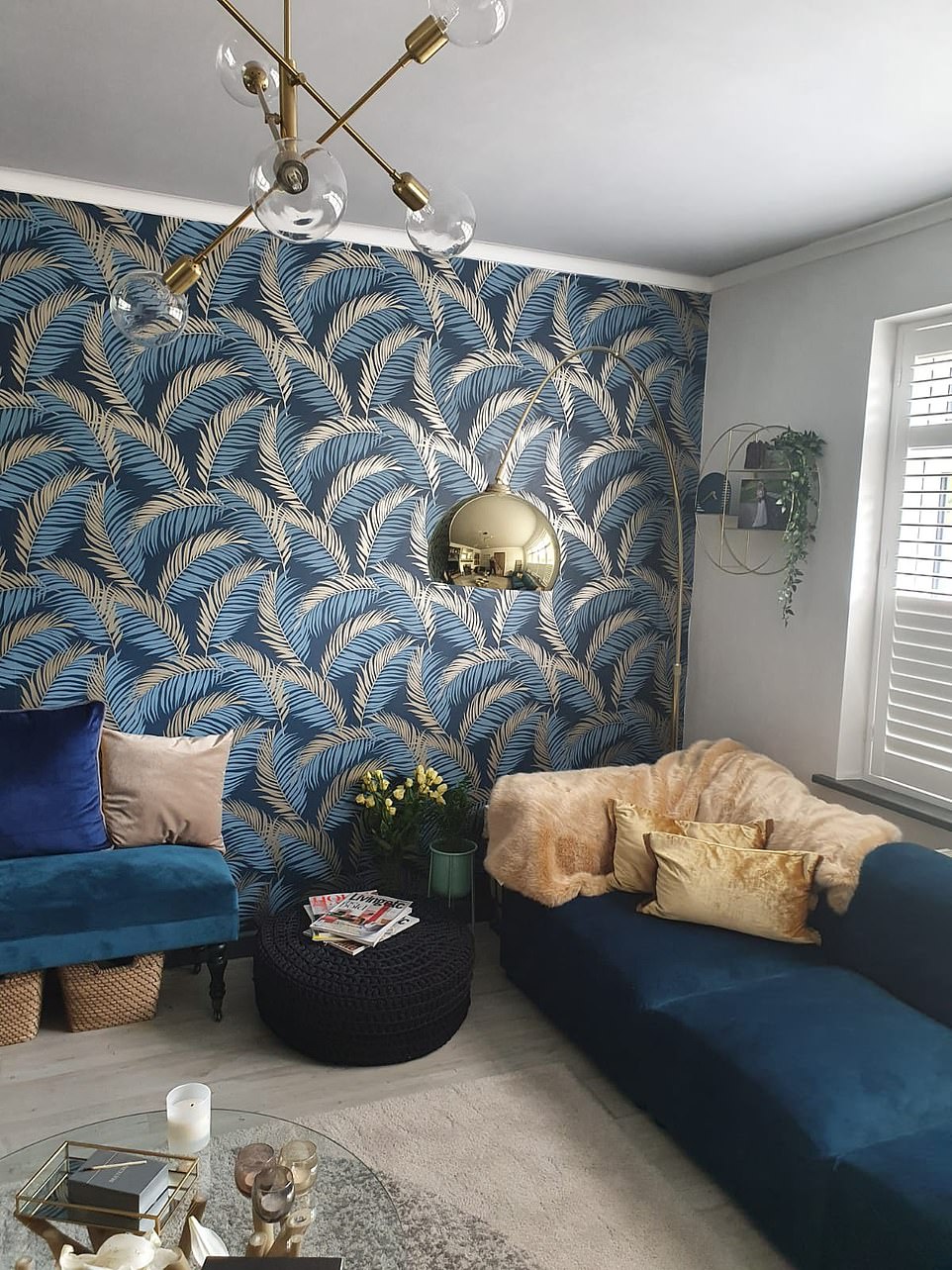 Transformed! But it wasn’t easy…mother-of-two Hannah Hooper, 33, and husband Berran, 35, bought a 1970s home in Wantage, Oxfordshire last year for £370,000 and have revealed the trials and tribulations they’ve faced transforming it into a stylish five-bed family home (Pictured: Hannah and Berran’s new-look living room) 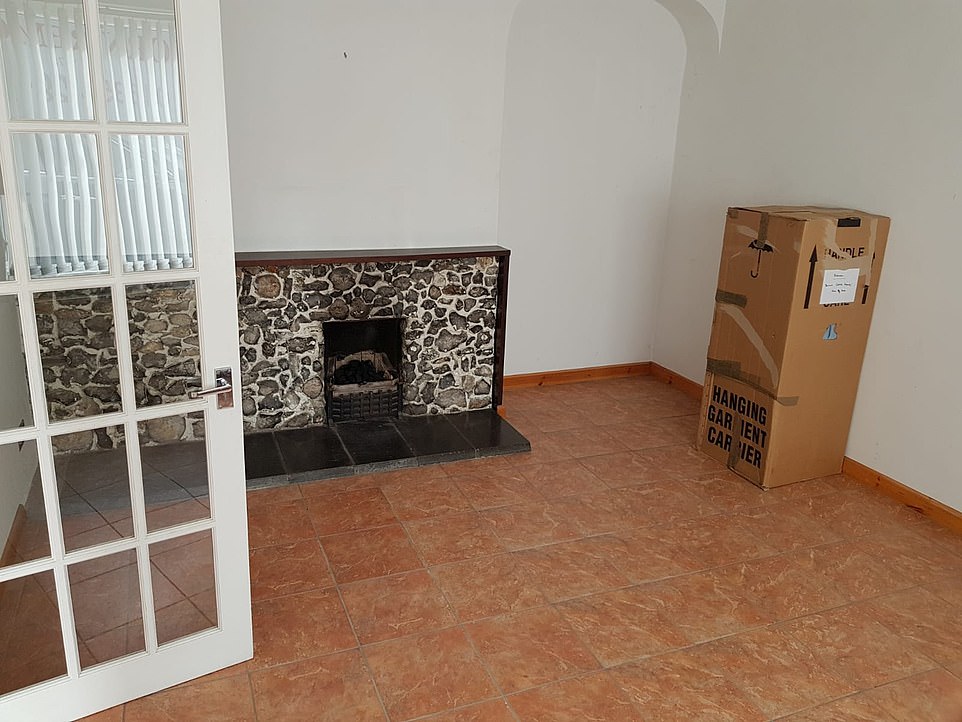 When the family moved into the house – just before their second daughter was born – they faced a terracotta nightmare, as the entire ground floor was covered in ceramic tiles 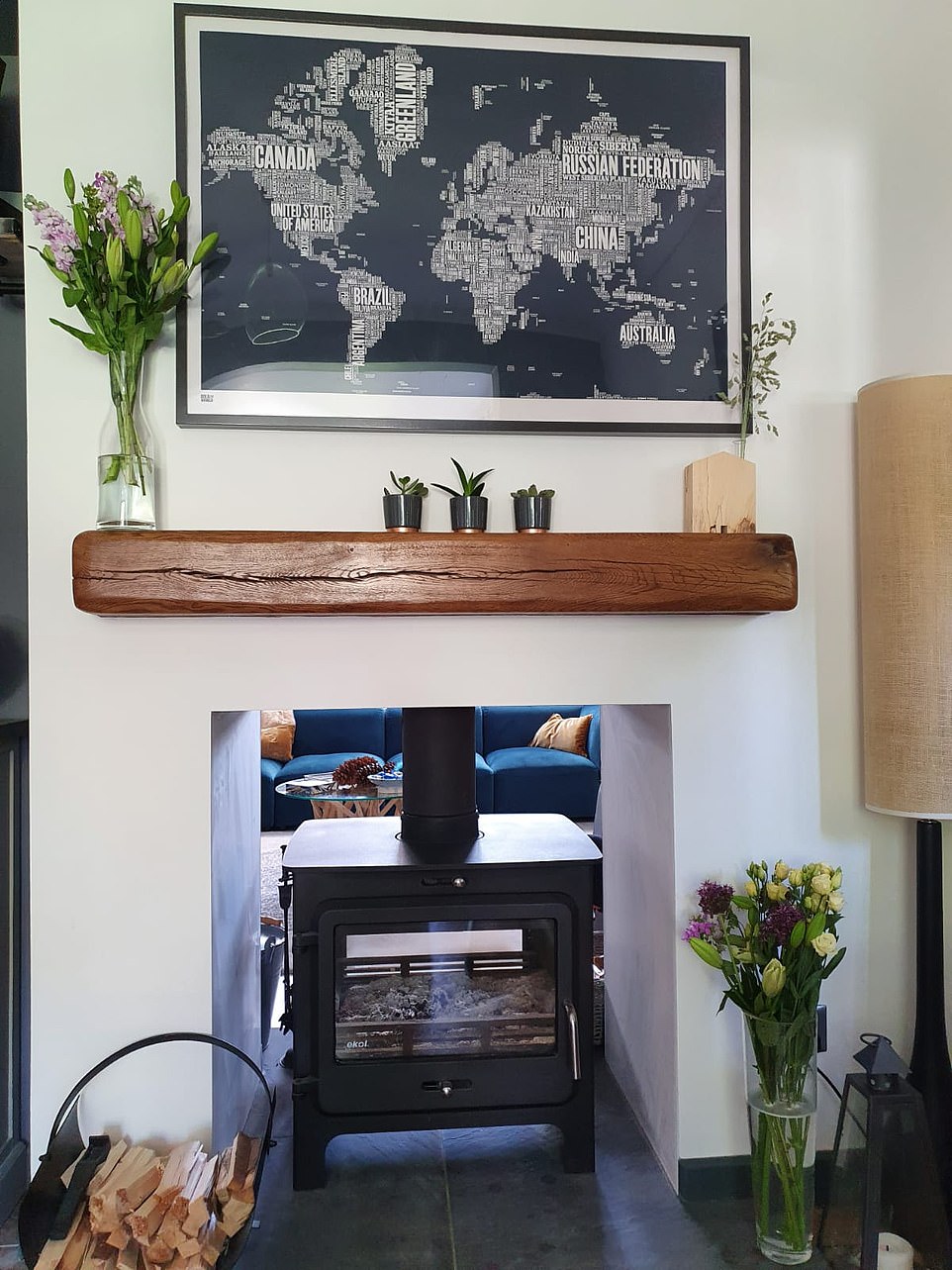 After investing £35,000 in their home – including novel features such as a double-sided log burner – the family say they think they’d already make a profit of £15,000 if the property went back on the market – with the kitchen still to do 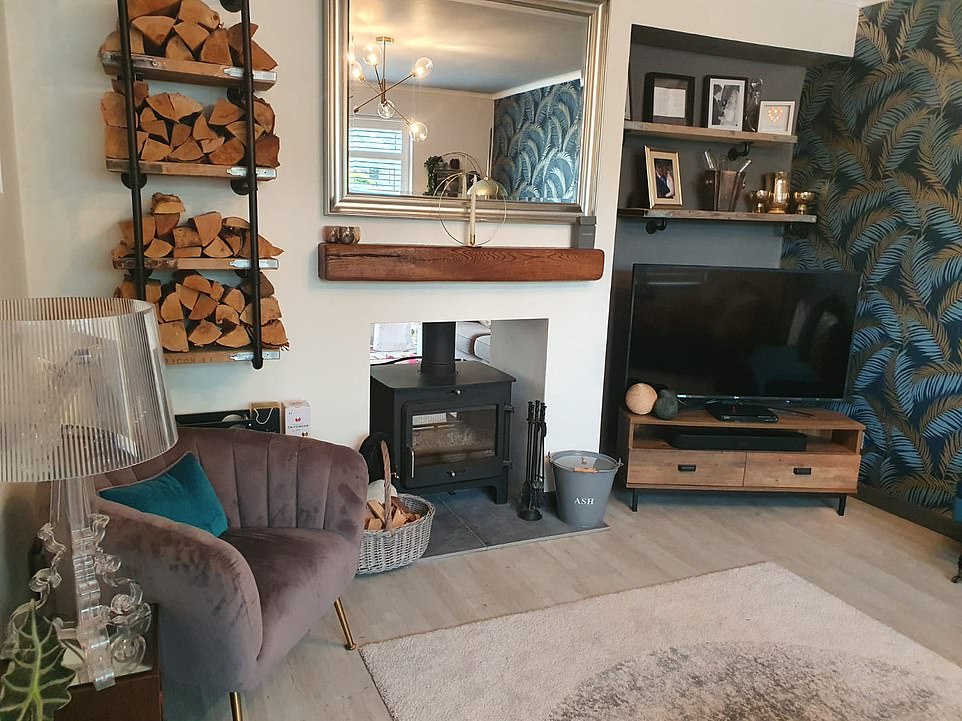 Hannah reveals how they ripped up the terracotta tiles that covered the entire ground floor, did a screed to level the old floor and put down laminate wood flooring to modernise 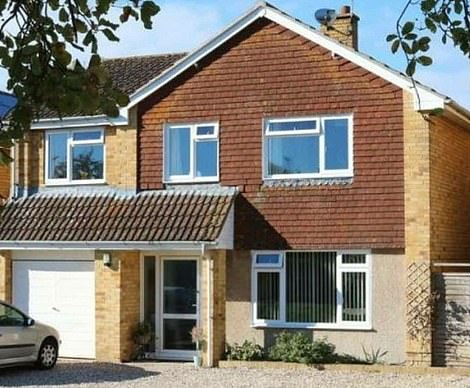 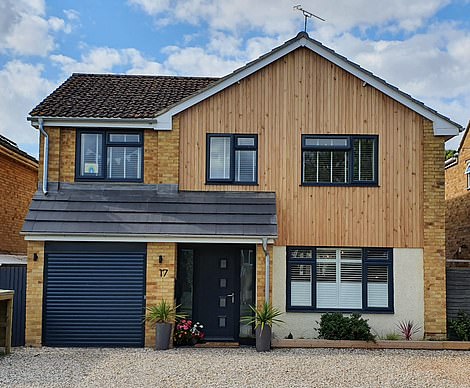 As the Hoopers old house looked pre renovation – the run of the mill 1970s home needed serious renovation to bring it up to date. Right: the couple had house’s white PVC windows sprayed anthracite grey, a new front and garage door and Canadian western red cedar cladding put on the exterior

Speaking to FEMAIL, Hannah, a self-employed beautician, who’s currently not working due to the pandemic, said they felt trepidation more than excitement when they moved into the house – especially because Hannah, 33, was just about to give birth to her youngest daughter.

However, their vision of having a roomy five-bedroom home with a big garden and lots of space for a growing family spurred them on.

She says: ‘This wasn’t the dream house and there were no tingly feelings or excitement, more nausea as we decided to start work straight away.

‘We moved in on my 32nd birthday at nine months pregnant and a toddler and the building work started three days later. We tackled pretty much everywhere.’

Hannah and husband Berran, 35, a design engineer manager, decided to go for broke and began renovating straight away despite their imminent arrival. 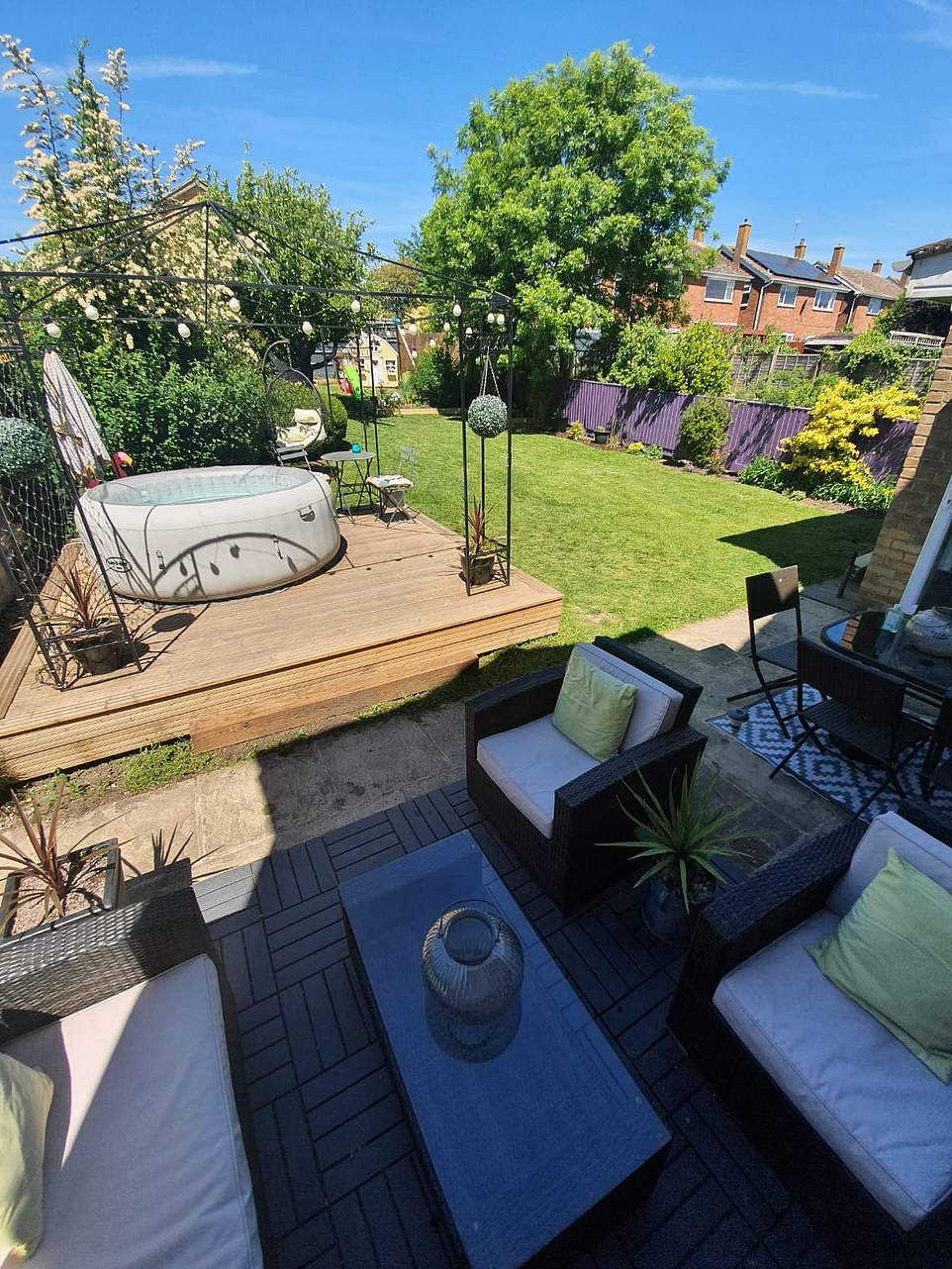 After adding in decking, outdoor furniture, a hot tub and cute shed for their daughters, the Hoopers have transformed the green space they have 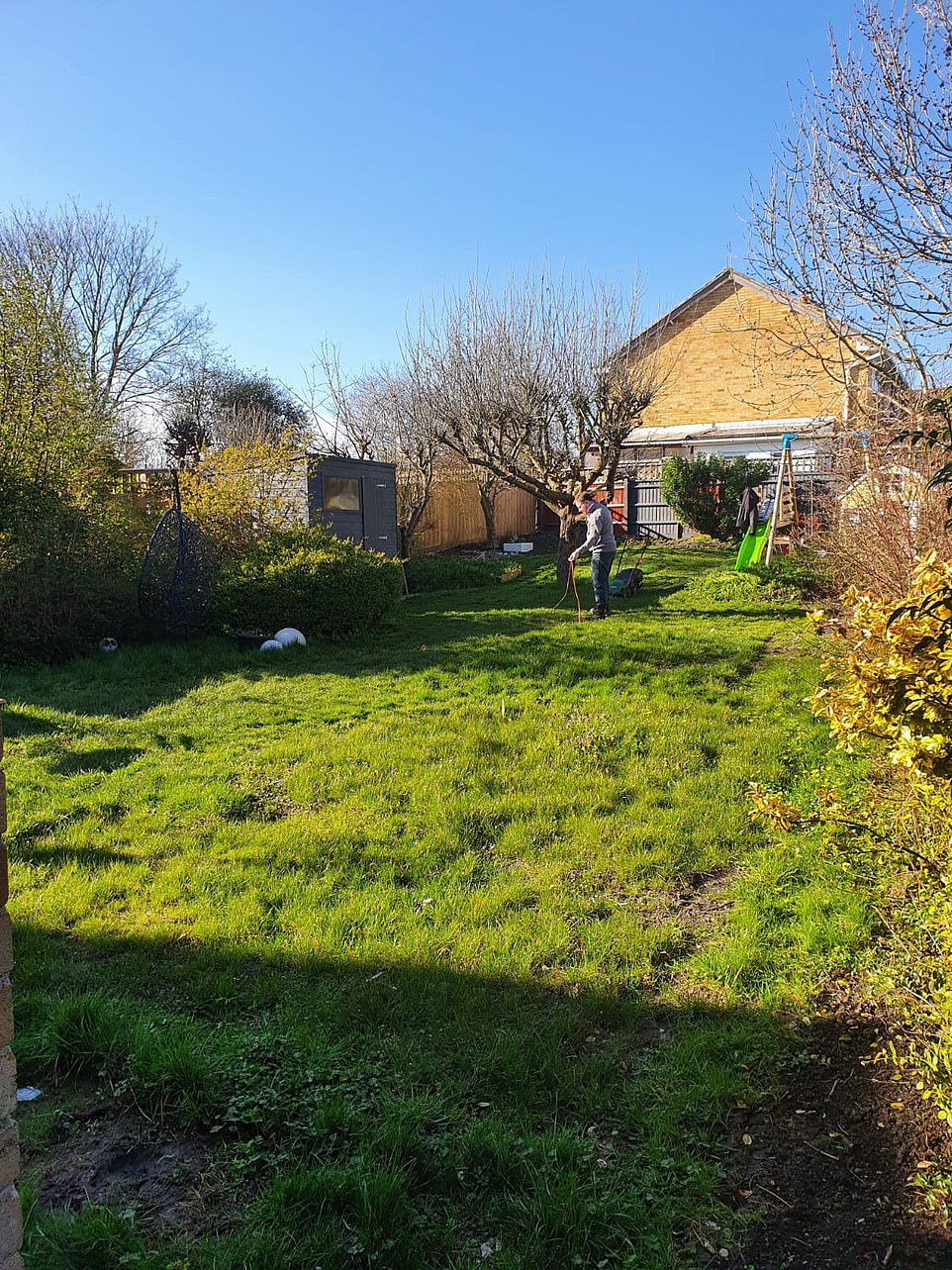 The property boasts a huge garden, but it was largely overgrown and unloved, say the couple 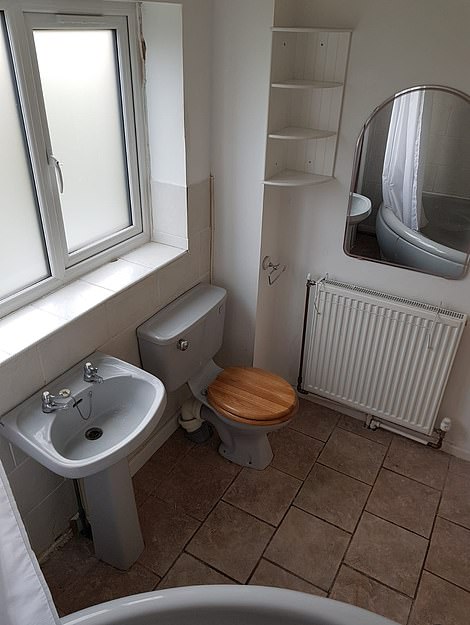 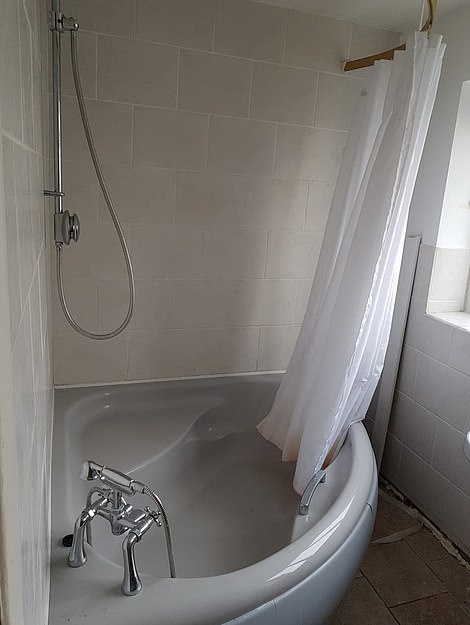 The bathroom the couple found when they moved in had hidden horrors – with the floorboards under the tiles rotted by urine. The grey corner bath that was in place in the bathroom also had to go 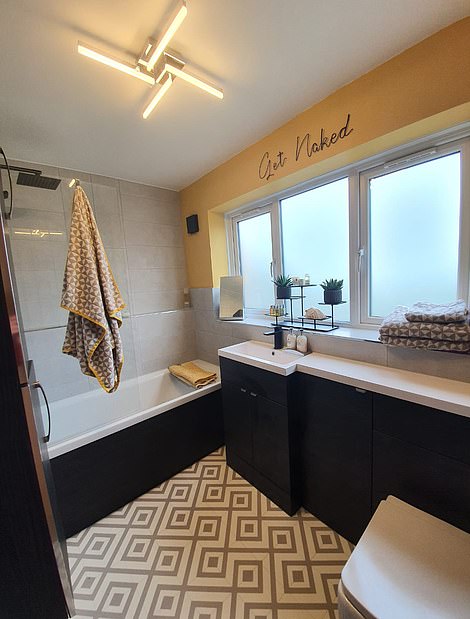 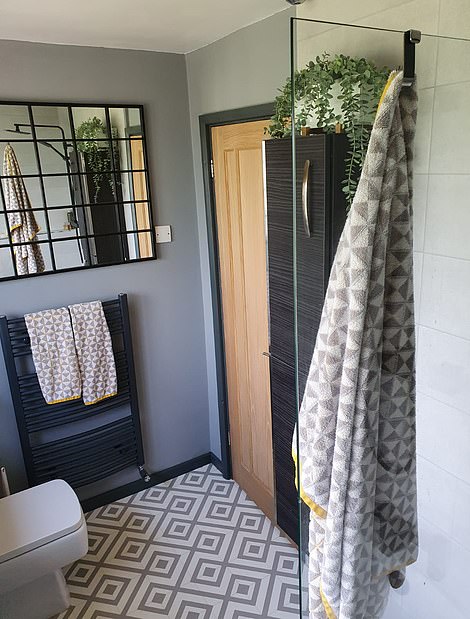 A splash of yellow on the walls and a stylish charcoal suite with geometric floor tiles has transformed the bathroom. Although a last-minute mishap saw Hannah left in tears after her new sink cracked after being installed 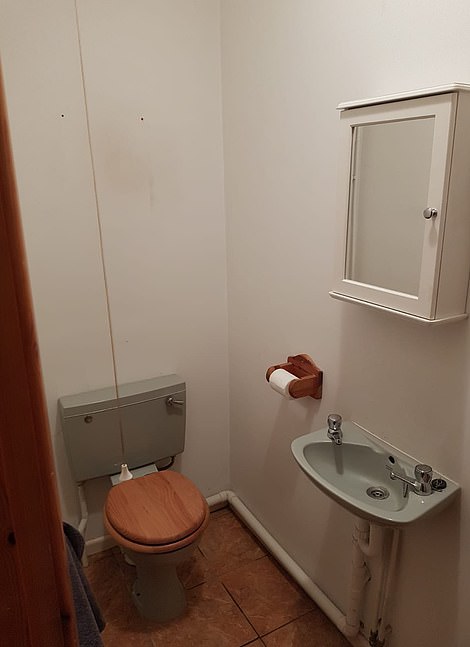 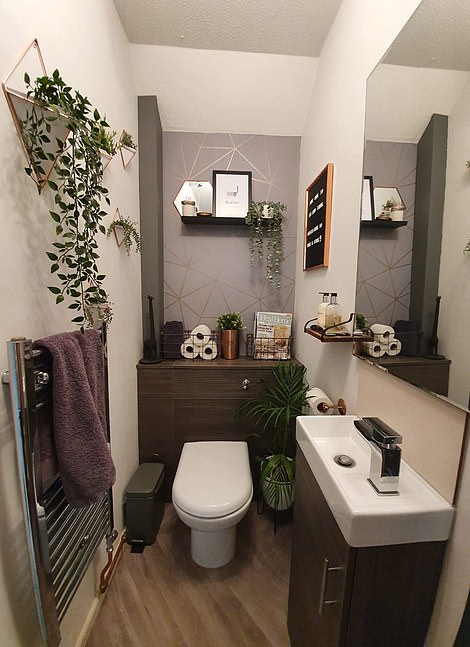 The couple have won lots of followers on Instagram for the on trend interiors they’ve put in: Pictured right: the couple’s new downstairs cloakroom. Left: as the toilet previously looked

‘The bathroom and downstairs loo were horrific so they were stripped out. The washing facilities were in the garage with no access from the house so we broke through to the garage to make a utility and a treatment room for me as the hope is to work from home more in the future.’

The couple, who at this point had a newborn and a toddler, lived with no bathroom for eight weeks and made a shocking discovery when they cracked off old tiles – the floorboards were all ‘rotten with urine’. When they did get new floorboards laid and tiles on, they found the room wasn’t perfectly square so it took ‘a lot longer to get them on the walls’. 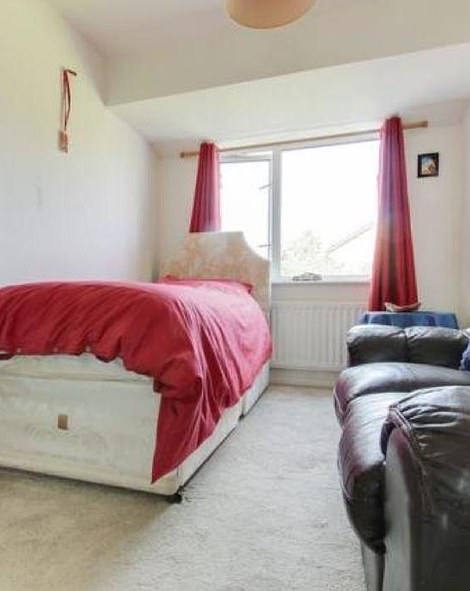 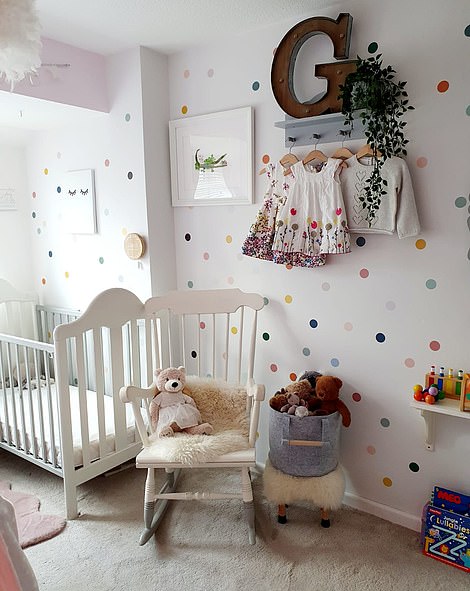 A boring bedroom has made the perfect nursery for Hannah’s youngest daughter. Colourful dots on a fresh white wall and cute accessories have transformed the room 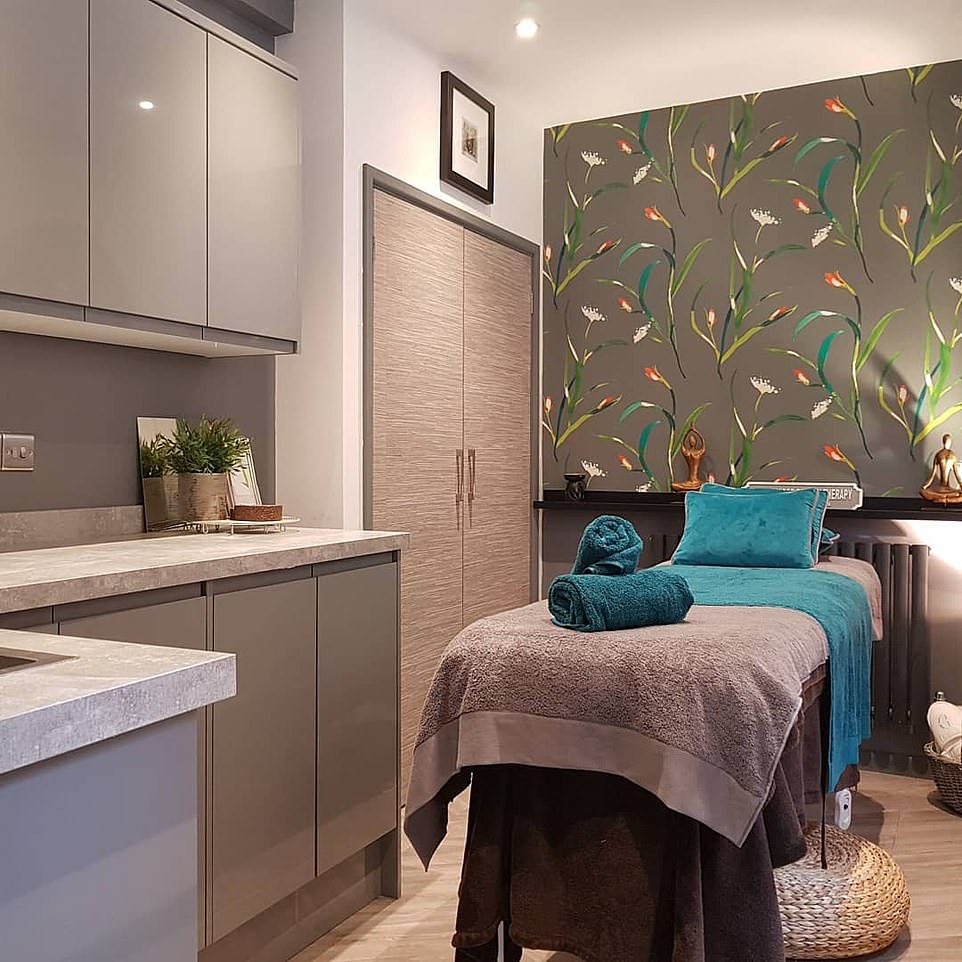 Hannah’s job as a beautician has been affected by the pandemic but she’s created a treatment room in their home, hopeful of being able to work from her house in future 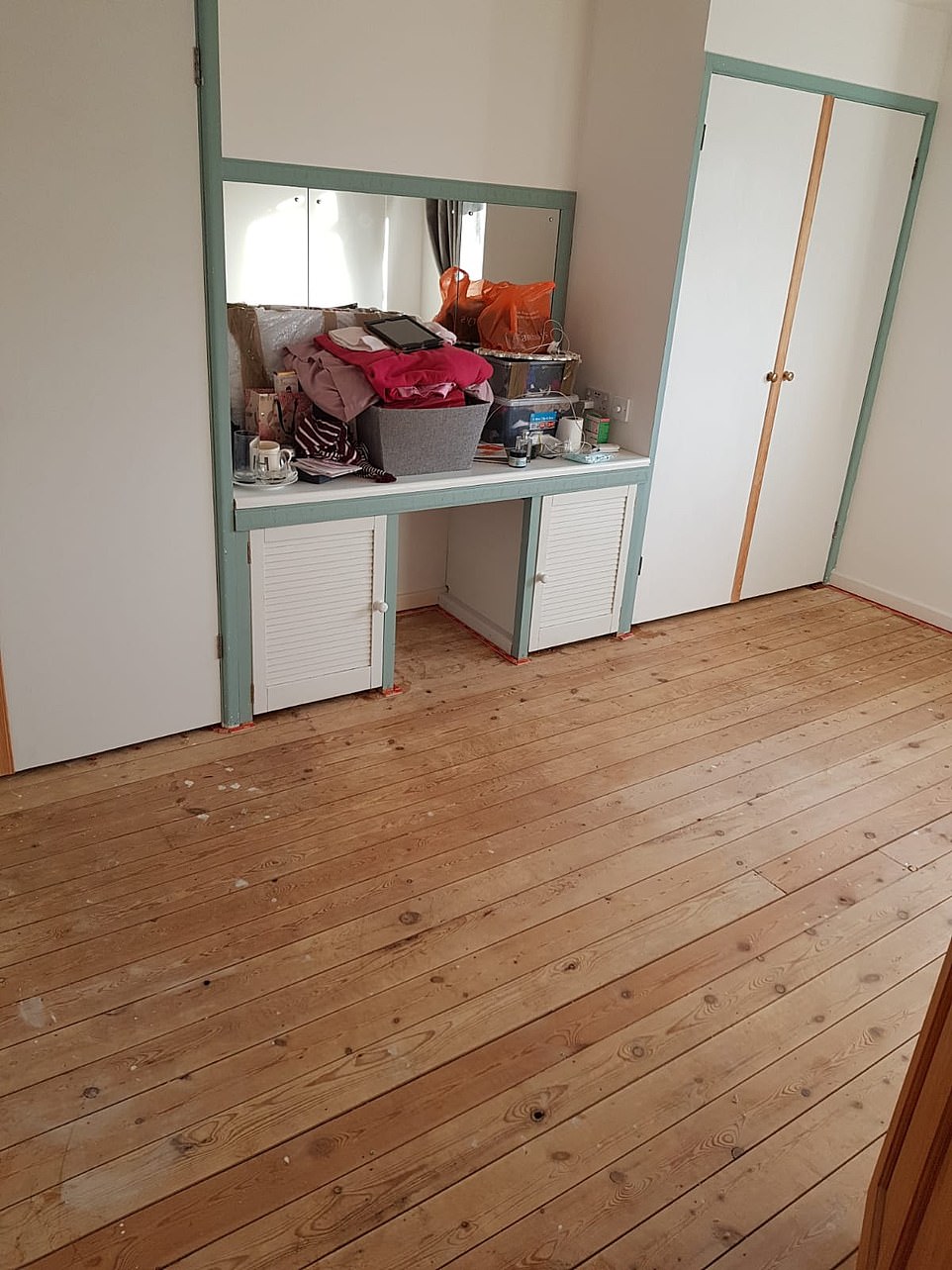 How the beauty treatment room looked before Hannah remodelled it

There were tears as the bathroom renovation place took place, she admits, after the new basin cracked in too just as the finishing touches were being added. Hannah calls the old boiler the couple lived with too ‘a complete eyesore’; saying ‘it had already proved a massive red alert on the building survey.’

The couple had it taken out of the kitchen and reinstalled a new one in the loft – something Hannah describes as a ‘huge job’ and left them needing ‘skip after skip’.

Downstairs in the house, they opted for a clever double-sided log burner after deciding they didn’t want to go for an open-plan layout, something they say has given them a grown-up space. 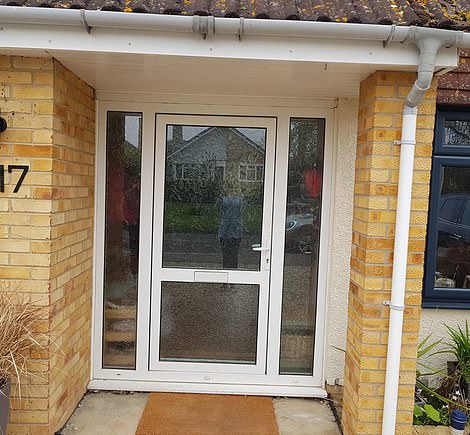 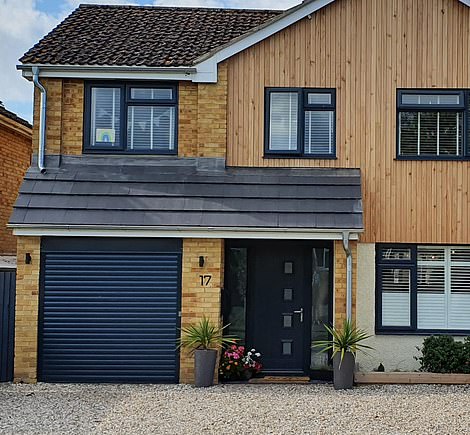 Says Hannah: ‘It allows us to have an adult lounge and a family room which leads to the play room. Having a glass of wine in the evening and not having to see plastic toys is a joy!’

The front of the house is completely transformed too; the couple have had the white PVC windows sprayed anthracite grey, a new front and garage door and Canadian western red cedar cladding put on the exterior.

They’ve shared their journey throughout on Instagram, with their new £20-a-roll living room wallpaper getting dozens of likes. ‘We had previously lived in a very magnolia house and are keen to be different where possible.’

Taking snaps along the way to see how far you’ve come is definitely a wise move, says Hannah: ‘My biggest tip is to most is to take as many photos as possible to you can remember what you’ve done and the changes you’ve made.’

Would Hannah and Berran tackle another renovation? ‘I would do it again but probably not with a newborn! We hope to stay here ten years and then move onto the next project.’