Justin Gavin, 18, was just on his way to Walgreens when he saw a burning car drive by him as other drivers tried to notify the woman driving that her vehicle was in flames.

Gavin started yelling at the woman to stop the car (she couldn’t), and once the brave teen realized what was happening, he did the first thing he could. Chase after the burning vehicle in an attempt to help the family inside.

“I just felt like if I was in that situation, I would want somebody to help me out,” Gavin told CNN. “I guess my instincts took over.”

Indeed, when the vehicle finally came to a stop, Gavin opened the car door, helped the mother out of the driver’s seat, and then pulled the three young children, ages 9, 4 and 1 out of their seats as well, even as the flames licked higher. 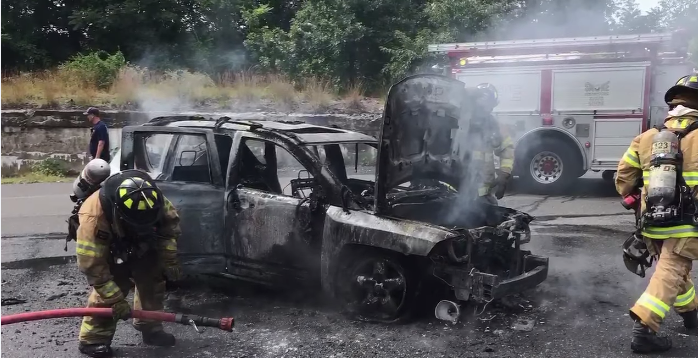 In only a matter of minutes later the entire car went up in flames.

“It kind of got scary because I didn’t know whether I was going to be able to get everyone out in time. And luckily, I did,” Gavin said.

The young man is now being hailed a hero by the Waterbury, Connecticut police after he assisted the woman and her three children who were trapped inside the vehicle.

Police Chief Fernando Spagnolo awarded Gavin a “challenge coin” in honor of his act of courage, noting, “I hope that when you have that coin it just reminds you of this day and you can reflect back on all the good that came out of this for you and that family that you saved.”

Related posts:
First-look at Drag Race Holland as NikkieTutorials revealed as guest judge
'Sister Wives': Janelle Brown Says Meri Made an 'Exceptionally Brutal' Comment to Her About Her Looks Early in Her Marriage to Kody
Popular News
How to get homeware worth £15 for FREE at Matalan
25/09/2020
Man Utd wonderkid Ramon Calliste, called ‘the next Giggs’, now owns luxury watch business and makes £5m a year – The Sun
26/03/2020
Megan Thee Stallion Addresses Criticism Over Twerking: ‘I Love to Shake My A**’
26/03/2020
Police guard shops to stop coronavirus panic-buyers and enforce social distancing – The Sun
26/03/2020
Coronavirus: Good Morning Britain’s Dr Hilary reveals ‘game-changing’ self-testing kit
26/03/2020
Recent Posts
This website uses cookies to improve your user experience and to provide you with advertisements that are relevant to your interests. By continuing to browse the site you are agreeing to our use of cookies.Ok