Conjoined Senegalese twins, 4, who moved to the UK at 7 months defy the odds by thriving at their Cardiff primary school as father hails their progress as a ‘Herculean achievement’

Conjoined twins who were expected to die after birth have defied the odds by starting primary school four years later.

Ibrahima Ndiaye, 50, brought his daughters Marieme and Ndeye from Senegal to the UK when they were seven months old in 2017 to seek help from Great Ormond Street Hospital.

The twins have separate brains, hearts and lungs but share a liver, bladder, digestive system, and three kidneys, and Ibrahima was told by doctors they wouldn’t survive long after their birth.

However the pair have been progressing well and settling into their Cardiff primary school, which their father says is a ‘Herculean achievement’ and an unfathomable thought when his daughter’s were born. 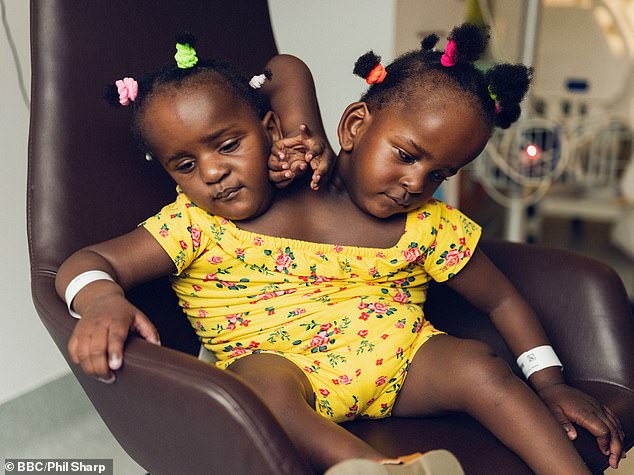 Conjoined twins Marieme and Ndeye Ndiaye (pictured) were expected to die after their birth, but have defied the odds by starting primary school four years later

Speaking to BBC News, he said: ‘When you look in the rear view mirror, it was an unachievable dream.’

‘From now, everything ahead will be a bonus to me. My heart and soul is shouting out loud, ‘Come on! Go on girls! Surprise me more!’

The twins have had to fit schooling in between hospital visits, but are said to have made plenty of friends, and have been enjoying their lessons.

At Tŷ Hafan Children’s Hospice the sisters have been learning what it feels like to stand with a special frame gives which helps them be upright and build leg strength. 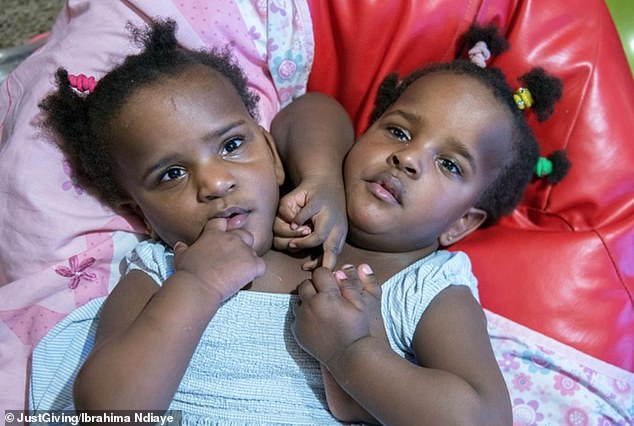 The pair have been progressing well and settling into their Cardiff primary school, which their father says is a ‘Herculean achievement’ 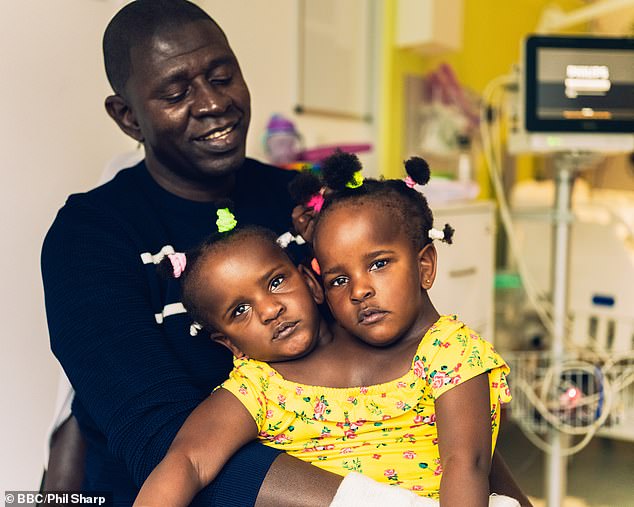 Ibrahima Ndiaye, 50, (pictured) brought his daughter’s from Senegal to the UK when they were seven months old in 2017 to seek help from Great Ormond Street Hospital

Despite the pair continuing to surprise doctors, Marieme’s heart is weak and her life expectancy is poor, meaning if she dies her conjoined sister will also pass away

What are conjoined twins?

Conjoined twins occur when siblings have their skin or internal organs fused together. It affects around one in 200,000 live births.

Conjoined twins are caused by a fertilised egg beginning to split into two embryos a few weeks after conception, but the process stops before it is complete.

The most common type is twins joined at the chest or abdomen. Separation surgery success depends on where the twins are joined.

Doctors can only tell which organs the siblings share, and therefore plan surgery, after they are born.

Omphalopagus twins are joined near the bellybutton and often share a liver but generally do not share a heart.

Craniopagus twins are joined at the back, top or side of the head, but not the face.

Earlier this year Safa and Marwa Ullah, from Pakistan, who were joined at the head were separated at Great Ormond Street in London.

More than 100 staff members treated the girls in a series of operations over four months which took 55 hours.

At least one twin survives 75 per cent of the time when they are separated.

Last year, Great Ormond Street surgeons considered attempting separation however Ibrahima eventually decided against it, as the procedure meant one of his daughters would not live.

In BBC documentary ‘Heart And Soul: The Right Thing’, which aired last year, father-of-six Ibrahima faced the dilemma of saving one of his daughters but letting the other die.

During one of the meetings with surgeon Dr Brierley explains to Ibrahima what will happen if he doesn’t separate his daughters.

In the end Ibrahima decided he could not separate the girls and know he caused the death of Marieme.

Ibrahima has since set up a foundation in his daughter’s name called ‘Conjoined Destiny’ to help raise awareness of their condition and to help others who may be suffering with similar complications.

The family wish to help other children with complex health problems in the UK and in Africa, to get the practical help they need to live ‘independent and dignified lives’.

Related posts:
Man Who Stole Sword from Mass. Statue Returns It 40 Years Later With ‘Shame and Remorse’
8 reasons to be hopeful (even if you’re not feeling it right now)
Popular News
California earthquake reported north of Monterey area
17/01/2021
Man Utd wonderkid Ramon Calliste, called ‘the next Giggs’, now owns luxury watch business and makes £5m a year – The Sun
26/03/2020
Megan Thee Stallion Addresses Criticism Over Twerking: ‘I Love to Shake My A**’
26/03/2020
Police guard shops to stop coronavirus panic-buyers and enforce social distancing – The Sun
26/03/2020
Coronavirus: Good Morning Britain’s Dr Hilary reveals ‘game-changing’ self-testing kit
26/03/2020
Recent Posts
This website uses cookies to improve your user experience and to provide you with advertisements that are relevant to your interests. By continuing to browse the site you are agreeing to our use of cookies.Ok