Soaring coal prices are driving up power costs in NSW and Queensland as Victoria and South Australia are reaping the benefits of relying on brown coal and renewables rather than black coal, undercutting scare campaigns about “wrecking ball” economic losses from clean energy.

The states that burn the most black coal and use the least renewable energy, NSW and Queensland, have the highest wholesale power prices and worst future outlook while Victoria and South Australia have been shielded from the spikes. 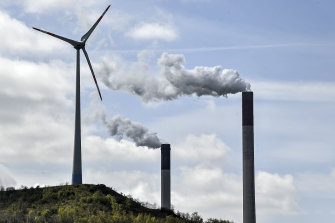 Coal power is driving up the cost of electricity.Credit:AP

Black coal prices have spiked because Russia’s invasion of Ukraine created a global energy crunch and increased demand for coal.

The wholesale price for the first quarter in Victoria was just $57 a megawatt hour. The state relies on brown coal, which unlike black coal is not influenced by the global market because it’s not exported.

South Australia, which doesn’t burn any coal and has the greatest proportion of renewable power in its energy mix, had a wholesale price of $71 in the first quarter.

“It’s no longer a simple narrative that addressing climate change will hurt the hip pocket and drive up power prices,” he said.

“But at the same time it’s also not as a simple as more renewables will deliver us cheap electricity because batteries still need to fall a lot more in price.”

Futures markets, used by big businesses and electricity retailers wanting to guarantee power supply at a certain price, are also more expensive in NSW and Queensland.

During the 2019 election campaign the Coalition attacked former Labor leader Bill Shorten when he pledged to cut Australia’s emissions 45 per cent by 2030 and increase the share of renewable energy to 50 per cent of the energy grid.

At that time, Energy and Emissions Reduction Minister Angus Taylor seized on modelling of Labor’s policies by BAEconomics’ managing director Dr Brian Fisher, which he said showed Labor’s policies would swing a “wrecking-ball through the Australian economy”.

In the current election campaign, Taylor warned power prices will rise up to $560 because bill payers would bear the cost of Labor’s grid upgrades.

Labor has pledged to invest $20 billion into electricity transmission lines, which would attract $58 billion in private investment.

Prime Minister Scott Morrison said on Friday that global forces had “pushed up the prices of energy” which was “outside of our control”. He harked back to the 2019 election when he warned Labor was “doing it again by having a policy that gold-plates the transmission network that only pushes prices up”.

Labor has rejected the Coalition’s claims and said its plan would increase the share of renewables to 83 per cent of the energy mix by 2030, bringing on cheaper power and lower electricity bills.

“Labor is the only party with an investment in transmission through our Rewiring the Nation policy, bringing more renewables, bringing more stability and lower power prices,” Labor’s energy and climate change spokesman Chris Bowen said on Friday. He said modelling showed prices would fall $275 on average by 2025. Experts are sceptical that Labor’s plan will work.

The Coalition has set a slightly lower renewable target of 69 per cent but hasn’t committed public investment to a program of new infrastructure to link more solar and wind farms to the electricity grid.

Renewables are providing cheaper power to the electricity grid, causing coal plants to close earlier than scheduled. Grattan says the grid can cope without any coal power as soon as 2040 without risking price spikes or blackouts if necessary reforms are put in place.

Cut through the noise of the federal election campaign with news, views and expert analysis from Jacqueline Maley. Sign up to our Australia Votes 2022 newsletter here.

Bunnings is an Australian religion, and Brunswick deserves a church
I tried on size 14 jeans from M&S, Next and George – they were totally different sizes, one was 2ins bigger than another
Popular News
'What a lovely couple!' Trump weighs into the Heard-Depp trial
17/05/2022
Man Utd wonderkid Ramon Calliste, called ‘the next Giggs’, now owns luxury watch business and makes £5m a year – The Sun
26/03/2020
Megan Thee Stallion Addresses Criticism Over Twerking: ‘I Love to Shake My A**’
26/03/2020
Police guard shops to stop coronavirus panic-buyers and enforce social distancing – The Sun
26/03/2020
Coronavirus: Good Morning Britain’s Dr Hilary reveals ‘game-changing’ self-testing kit
26/03/2020
Recent Posts