Children growing up with pets have less social problems as adults

Pawsitive influence: Children who grow up with dogs and cats in the house are 20 per cent less likely to have social and emotional problems as adults, study claims

Growing up with a dog or a cat in the house means you are 20 per cent less likely to have social and emotional problems as an adult, a study claims.

Researchers from the University of Western Australia found pets were particularly beneficial to only children.

They studied children aged five and then again when they turned seven to find out the impact animals have on their mental and physical health.

The Australian study found small children with a pet are less likely to be naughty at school and more likely to socialise with other children. 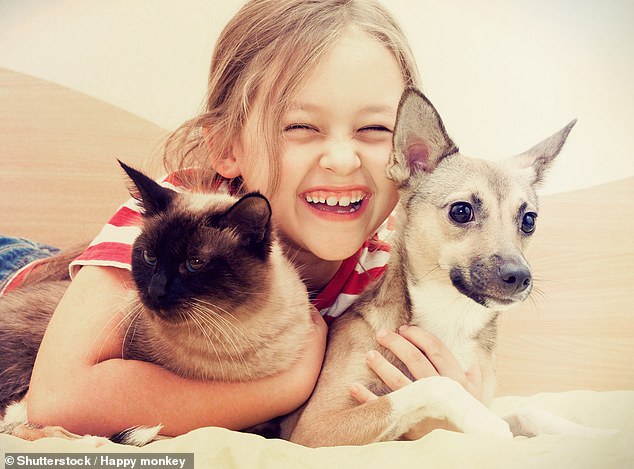 Growing up with a dog or a cat in the house means you are 20 per cent less likely to have social and emotional problems as an adult, a study claims. Stock image

The benefits of a pet are well known for adults, from walking dogs to increase exercise activity to having cats as companions for those on their own.

Having pets at home leads to an increase in confidence and teaches children vital lessons about caring for others, trustworthiness and friendship, the study found.

Even the death of a pet, while heartbreaking, can help kids develop an understanding about loss and develop their emotional understanding, said the University of Western Australia research for the specialist Journal of Pediatrics.

The authors looked at data from a nationwide study of more than 4,200 Australian children at both age five and, again, at age seven which included a psychological questionnaire measuring social-emotional development.

One in four of the study group – 27 per cent – had abnormal scores but those with pets were, on average, 20 per cent less likely to be among them.

The scores were better for those with either a dog or a cat compared to those without pets at all, the study authors discovered.

Overall, 75 per cent of the children analysed lived in a home with a pet and most likely to have had a pet join the household around the time they began school.

‘Pets may protect children from developing social-emotional problems and should be taken into account when assessing child development and school readiness.’ 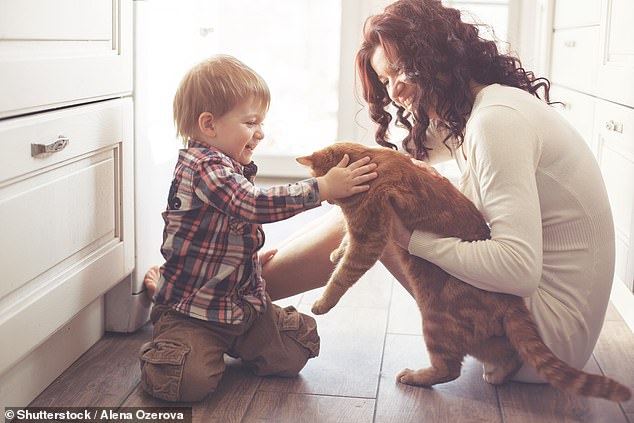 Researchers from the University of Western Australia found pets were particularly beneficial to only children living in homes without brothers or sisters. Stock image

The study authors found that children without siblings benefit the most in terms of their social skills as the pets help them socialise and relate to others.

They found owning a household pet is associated with fewer social and emotion problems in young children and it doesn’t matter what the pet is.

‘Compared with children with no pets, children with dogs or cats had fewer emotional symptoms and peer problems, and dog owners had better prosocial behaviour,’ they found.

‘Pet ownership was associated with positive child social outcomes, such as relationships with peers and the ability to form friendships and be well-liked.’

One of the things the researchers found was that interacting with pets can help children to learn about social concepts.

They do this by mimicking the interactions that children have with other humans.

‘Interacting positively with a pet can increase confidence and decrease the fear of rejection in social interactions with other children,’ the authors claim.

HOW DID DOGS BECOME DOMESTICATED?

A genetic analysis of the world’s oldest known dog remains revealed that dogs were domesticated in a single event by humans living in Eurasia, around 20,000 to 40,000 years ago.

Dr Krishna Veeramah, an assistant professor in evolution at Stony Brook University, told MailOnline: ‘The process of dog domestication would have been a very complex process, involving a number of generations where signature dog traits evolved gradually.

‘The current hypothesis is that the domestication of dogs likely arose passively, with a population of wolves somewhere in the world living on the outskirts of hunter-gatherer camps feeding off refuse created by the humans.

‘Those wolves that were tamer and less aggressive would have been more successful at this, and while the humans did not initially gain any kind of benefit from this process, over time they would have developed some kind of symbiotic [mutually beneficial] relationship with these animals, eventually evolving into the dogs we see today.’