It was worn by early astronaut Wally Schirra’s wife Jo and is selling for £32,000. The charms are from the six first US manned Mercury missions in the early 1960s plus extra ones from Gemini 6 in 1965 and Apollo 7 in 1968. Jo and Wally’s daughter Suzanna said: “My memories of this charm bracelet go back to early childhood. I remember how excited my mother, along with the other original seven wives were, to receive a charm from each Mercury flight.”

She said it was a treasured possession, unique in that it was the only one that has Gemini and Apollo charms as her dad “was the only astronaut to fly all three programmes”.

Also up for grabs in the space and aviation sale are personal mementos of Al Worden.

He performed the first ever deep space walk during Apollo 15’s 1971 lunar mission and a sale highlight is his “IV Crewmen Tether”, estimated at £21,500. 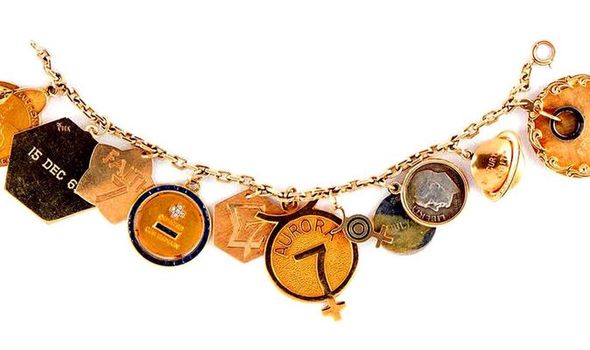 It was used to keep him from floating from his craft as he retrieved two film canisters. Worden’s 18ct gold medallion, which Commander Dave Scott carried to the moon on Apollo 15, is selling for £18,000.

And Buzz Aldrin’s Apollo 11 checklist for the first lunar landing in 1969 is also listed.