No more fighting like cat and dog: Filling your home with appeasing pheromones could be the key to harmonious pet relationships

Filling your home with pheromones that appeal to cats and dogs could be the key to a harmonious relationship feline friend and pet pooch, a new study discovered.

Animal behaviour experts from the University of Lincoln examined the impact of different scents on the relationship between different types of household pets.

The new research, led by Professor Daniel Mills and Dr Miriam Prior, explored the effects of two different pheromone products on cat-dog interactions in homes.

Feliway Friends, which emits pheromones that are calming for cats and Adaptil, which does the same for dogs can both be used to create a better environment.

They found that while both chemicals improved overall harmony, Adaptil actually led to positive behavioural changes in dogs which likely made cats more open to forming social bonds with their canine housemates. 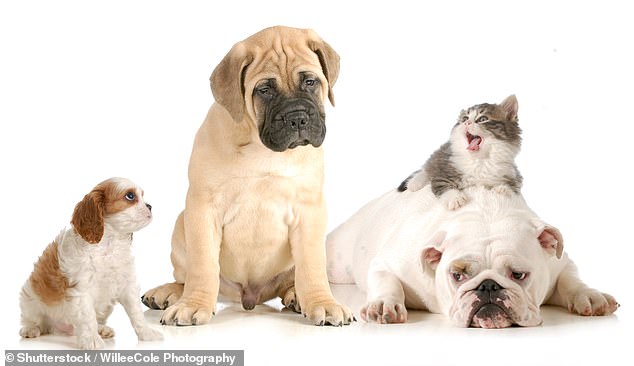 Filling your home with pheromones that appeal to cats and dogs could be the key to a harmonious relationship feline friend and pet pooch, a new study discovered

The team from Lincoln worked with pet owners who have cats and dogs under the same roof and said there was ‘room for improvement’ in the animal relationships.

Researchers found that both dog and cat friendly pheromones helped in terms of pet household harmony.

They both led to a reduction in negative behavioural traits.

However, dog friendly pheromones actually led to an increase in positive behavioural traits in dogs.

The team suggest this was due to a reduction in the number of times the dog chased the cat.

This led to the cat being more open to creating a social bond with the dog.

The results show that both products had a positive impact on the interactions between cats and dogs living in the same home.

Over a six week period, both products led to a notable decrease in undesirable interactions between the two typical pet species.

This included dog chasing cat, cat hiding from dog, cat and dog staring at each other, and dog barking at cat.

Users of Adaptil even observed a significant increase in some desirable behaviours – friendly greetings between cat and dog, and time spent relaxing in the same room.

‘We believe this is the first study of its kind to explore the use of pheromone products to improve the relationship when the two species are living in the same household,’ explained Professor Mills.

‘Seven per cent of households in the UK own both a cat and a dog, which represents a large number of pet owners and their animals living with potentially stressful animal relationships on a day-to-day basis,’ he explained.

‘Many cat and dog owners report that their animals are comfortable in each other’s company, but where this isn’t the case, a poor relationship between a resident cat and dog can have serious consequences for the welfare of individual animals.’

The team say this could be revealed as an unacceptable level of social stress or restricted access to resources such as food, water or toilet areas.

‘There will also be increased stress for the remainder of the family (both human and animal), and potential risks of injury due to conflict,’ Mills said.

A problematic relationship between a new pet and an existing pet is one of the main reasons for cats and dogs being taken to shelters for rehoming, experts claim.

They were split into two groups – one group using Feliway Friends and the other using Adaptil, with the pheromones supplied in unlabelled packaging and randomly assigned by an independent staff member.

This was so that neither the participants nor the researchers knew which product was being trialled in each household until after the statistics had been collected. 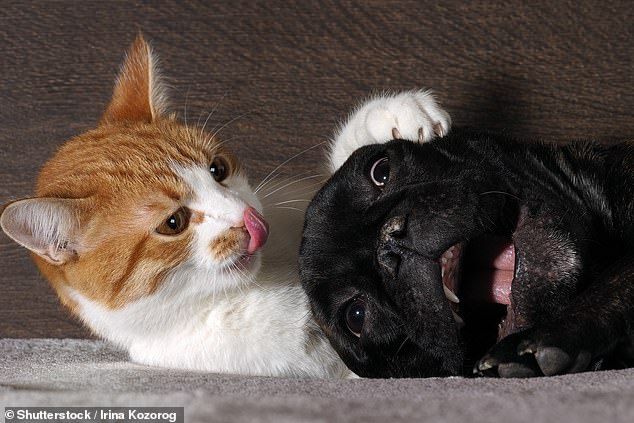 They found that while both chemicals improved overall harmony, Adaptil actually led to positive behavioural changes in dogs which likely made cats more open to forming social bonds with their canine housemates

The researchers were aware that in many households, the comfortability of the cat seems to have a stronger influence over the quality of the cat-dog relationship.

It could therefore be seen as surprising that it was the product releasing dog pheromones which was seen to increase specific desirable interactions.

Miriam, a Lincoln-based vet said Feliway Friends should have in theory been more effective as cat comfort is usually more important in their relationship with dogs.

‘This did not appear to be the case. Our results might be explained by the behaviour of the dog being the primary determinant of the cat’s quality of interaction with it.

‘We would like to investigate this further to really tease out the effects of these pheromone products individually and also to investigate their use in combination with each other,’ said Miriam.

‘We suggest that Adaptil may have had such a beneficial effect because a more relaxed dog may be less likely to disturb the cat, resulting in a cat that is less stressed and more willing to form some form of social bond with the dog.’

A genetic analysis of the world’s oldest known dog remains revealed that dogs were domesticated in a single event by humans living in Eurasia, around 20,000 to 40,000 years ago.

Dr Krishna Veeramah, an assistant professor in evolution at Stony Brook University, told MailOnline: ‘The process of dog domestication would have been a very complex process, involving a number of generations where signature dog traits evolved gradually.

‘The current hypothesis is that the domestication of dogs likely arose passively, with a population of wolves somewhere in the world living on the outskirts of hunter-gatherer camps feeding off refuse created by the humans.

‘Those wolves that were tamer and less aggressive would have been more successful at this, and while the humans did not initially gain any kind of benefit from this process, over time they would have developed some kind of symbiotic [mutually beneficial] relationship with these animals, eventually evolving into the dogs we see today.’