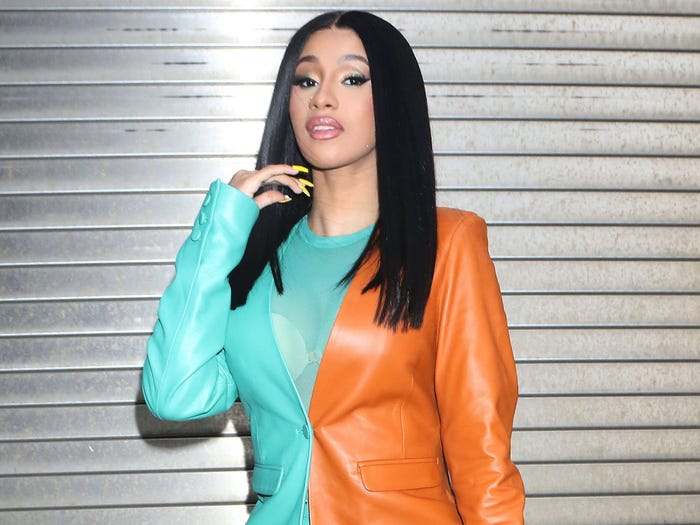 Cardi B has apologized after being accused of cultural appropriation.

The rapper recently took part in a photo shoot for the cover of Footwear News to promote her new footwear collaboration with Reebok.

In the image, Cardi B is seen with eight arms and is posing in the typical position of the Hindu goddess Durga, who is known for strength, protection, and war, and typically depicted as having eight or 10 arms.

Following mounting criticism on Twitter, Cardi B responded on her Instagram story, saying: "So a lot of my fans are telling me that I'm getting dragged by social media. They saying it's because of my Reebok shoot and saying that I disrespected like a goddess or something."

The 28-year-old, who is Catholic, explained: "When I did the Reebok shoot, the creative told me I'd be a goddess that represents strength, femininity, and liberation, and that is something I love, that I'm all about and I thought it was dope. If people think I offended their culture or religion, I want to say I'm sorry; that was not my intent. I do not like disrespecting people's religion. I would not like it if anyone disrespected my religion, with people dressed as the Virgin Mary or Jesus, as long as they do it in a beautiful and graceful way I don't feel a certain type of way. I wasn't trying to be disrespectful, maybe I should have done my research."

She added in the caption: "Sorry guys I didn't mean to offend or disrespect anybody's culture. I can't change the passed [sic] but I'll be more cautious for the future."

Among those criticizing the WAP rapper, one Twitter user wrote: "Cardi B using my religion as a way to promote something and trying to cover it up as a 'homage' is disgusting. What she is doing is cultural appropriation and there is no one that can tell me otherwise."

Agreeing with their statement, another person commented: "How absurd is this??"

A third person argued: "Excuse me ma'am this is not homage. It's disrespectful. She is holding a f***ing shoe and we don't even wear one when we go to a temple. And the fact that she is being compared to Durga without even knowing how disrespectful it is to Hindus makes it even worse. Educate yourself. "

However, others defended the star, with one follower writing: "As an Indian and a Hindu I am not offended by the post. There is nothing wrong with it."

Another added: "I see where you're coming from but you gotta understand though, this is for a magazine cover about advertising her show and nine times outta 10 it's not up to the artist on what the magazine wants to do with your cover. If they have an idea they're gonna use it regardless [sic]."

In a statement shared with People, Footwear News said they take "full accountability" over the photoshoot.

"Yesterday we posted content from our exclusive Cardi B cover shoot. One of the images was intended to pay homage to Hindu goddess Durga, and our intent was to show a powerful woman," a spokesperson said.

"However, we realize we were not considerate of certain cultural and religious perspectives and how this could be perceived as deeply offensive. We take full accountability for this oversight and we apologize. It is important we learn from this example and are sensitive to this sort of religious imagery when creative discussions are taking place in the future."

Related posts:
Chelsea Houska Confirms 'Teen Mom 2' Exit After 10 Seasons
Was Prince Philip a Terrible Role Model For Prince Charles?
Popular News
New Pogues documentary adds SUBTITLES
01/12/2020
Man Utd wonderkid Ramon Calliste, called ‘the next Giggs’, now owns luxury watch business and makes £5m a year – The Sun
26/03/2020
Megan Thee Stallion Addresses Criticism Over Twerking: ‘I Love to Shake My A**’
26/03/2020
Police guard shops to stop coronavirus panic-buyers and enforce social distancing – The Sun
26/03/2020
Coronavirus: Good Morning Britain’s Dr Hilary reveals ‘game-changing’ self-testing kit
26/03/2020
Recent Posts
This website uses cookies to improve your user experience and to provide you with advertisements that are relevant to your interests. By continuing to browse the site you are agreeing to our use of cookies.Ok