As the virus spread and the lockdowns began, factories went silent and the skies emptied of aeroplanes and then, in the industrial heartland of China, of smog itself.

NASA published satellite images and heat maps of the skies over Wuhan and Milan, the industrial capital of northern Italy, clear of nitrogen dioxide – the gaseous residue of fuel burnt in cars and trucks, factories and power plants – for the first time in memory. 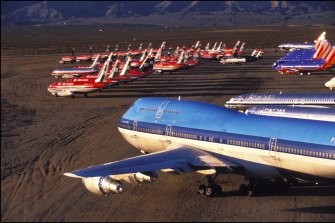 The grounding of much of the world’s passenger aircraft is one of the more obvious reductions in global greenhouse gas emissions – at least for the short term. Credit:Getty Images

As though buoyed by the faintest of good news in the unfolding catastrophe, people around the world began sharing photographs of wildlife returning to environments suddenly cleared of pollution – swans and dolphins in Venice’s canals, elephants drunk on pilfered rice wine in Yunnan province. Sadly, as National Geographic reported, few of the images weren't quite what they seemed. The swans had always been there; the dolphins had been filmed elsewhere.

Similarly, though the sudden drop in carbon emissions is real and measurable, few experts who spoke to this masthead believe the economic shutdown caused by the coronavirus will have any lasting positive impact on curbing climate change. Some fear it might eventually even hamper efforts to reduce carbon.

Just how much less carbon is in the atmosphere as a result of coronavirus is of course not yet clear.

So far, aviation is the most obvious virus casualty, as grounded planes line up in neat rows in deserts from near Alice Springs to California and elsewhere.

The Australian operations of Qantas and Virgin Australia account for about 7 million tonnes of carbon dioxide-equivalent a year – or a bit over 1 per cent of Australia’s annual pollution of about 530 Mt CO2-e.

The near-complete stalling of related tourism activities will also lop transport emissions, and a “big reduction in petroleum product consumption” is under way, says Hugh Saddler, at the Australian National University. Comprehensive figures, though, won’t be available for weeks.

“Distribution businesses may well see spatial changes in demand on their systems, with less in CBDs and more in the suburbs particularly during working hours,” Saddler says.

Australia’s biggest source of greenhouse gases is the electricity sector, contributing about a third. Demand, so far, is comparable to similar period of the past five years, with any reduction in workplaces being made up by extra power demand at home, according to the Victoria Energy Policy Centre. “Demand reduction – the main impact of COVID-19 – is not yet big in Australia,” Bruce Mountain, director of the centre, says. “We do not expect a lasting impact.”

In China the reduction in atmospheric pollution has been profound. Nationwide coal use this year is down 36 per cent over the same period in 2019, the World Economic Forum reported. According to the Centre for Research on Energy and Clean Air, in the month after the Lunar New Year on February 12, fine particle air pollution was down 25 per cent and nitrogen by 40 per cent compared with the same period a year earlier.

The CarbonBrief website estimated in March that the amount of coal flowing through China’s largest coal port was down by 29 per cent, activity in steel works was off 23 per cent and oil refining capacity had dropped 34 per cent. Overall, it was estimated that as a result China’s total carbon emissions were down by 25 per cent on the previous year.

As the virus spreads similar drops are being measured around the world.

Researchers from Columbia University in New York told the BBC their testing found carbon monoxide mainly from cars had been reduced by nearly 50 per cent compared with last year, while CO2 was down between 5 and 10 per cent in the region.

All of this should be good news, but few experts are celebrating. This is because historically, despite all the rhetoric by governments around the world about the urgent need to reduce carbon emissions, the only time they have ever actually dropped has been during global crises.

A study published in the journal Nature found emissions in that country fell by 10 per cent between 2007 and 2009 due to a reduction in the use of goods and services as a result of the financial crisis, while another in Nature Geoscience shows the only other falls were caused by the two World Wars and the Great Depression.

Zeke Hausfather, director of climate and energy at the US-based Breakthrough Institute, also found “no silver lining” in a report this week that the pandemic will barely trim global emissions this year.

Most economists are so far predicting a plunge in economic activity in all major economies during the first half of the year, with a sharp rebound in the second half. China’s economy is quickly ramping back up, Hausfather says. “None of the past recessions the world has experienced have made much of a long-term dent in emissions,” Hausfather says.

Further, he says, governments will be tempted to sideline climate change action as they rebuild economies. "Historically we've seen climate issues become much less of a priority for policymakers during times of economic downturn as a chronic problem. Climate tends to take second priority to acute problems [such as] pandemics and recessions.”

Depending on where stimulus money lands, new high-emissions sources could be locked in for the long haul. This process is already apparent in China, which as reported this week, issued permits for more new coal fired power stations in the first two and half weeks of March than it did all of last year.

Li Shuo, a senior climate policy adviser for Greenpeace East Asia, calls the tendency of emissions to leap after crises "revenge pollution". She told CNN earlier this month that she expected economic stimulus in China to cause a leap in emissions in the second half of the year.

Frank Jotzo, director of the Australian National University’s Centre for Climate and Energy Policy, has a similarly glum view of the drops seen this month. “These are the wrong types of emissions reductions. This in no time for jubilation for a few percentage points.”

Climate scientists and activists are alive to the threat and are already calling for governments to create “green” stimulus packages.

“While the restrictions on travel and large meetings are challenging, in turn they may also help us shift our own behaviour to work, education and travel patterns that are much more sustainable, including recognising the opportunities and broader benefits of teleworking and virtual meetings,” the World Resources Institute’s Helen Mountford argued this month. “We are being forced to reset our habits now, but we should use this as a learning moment as we come out of the crisis.”

In a social media post the executive director of the International Energy Agency Fatih Birol called for governments to direct large-scale investment packages to clean energy technologies to stimulate economies while accelerating the transition to clean energy. “The progress this will achieve in transforming countries’ energy infrastructure won’t be temporary – it can make a lasting difference to our future.”

Jotzo says government infrastructure spending will be expanded, but “do you build a highway or a high-speed railway?”

“The temptation will be to rebuild everything the way it was before – and there will be pressure to do that,” he says. “There’s really a lot at stake.”

How our taxpayers’ funds are used will set Australia and elsewhere on an emissions course that is “much more important than a few per cent reduction in 2020” he says. “This is about emissions reductions for decades to come.”