Canned and frozen fruit and vegetables often healthier than FRESH

Pass the tin opener! Canned and frozen fruit and vegetables are often healthier, cheaper and tastier than their fresh counterparts, says consumer group Which?

Frozen and even canned fruit and veg is often healthier, cheaper and tastier than fresh versions, according to consumer watchdog Which?.

Fresh produce may have come from the farm rather than the factory but the chances are that they are no better for you than the alternatives in cans, packets or frozen aisles, the group concluded.

And there is a good chance that not even be as ‘fresh’ or as full of nutrients, minerals, vitamins and other health benefits as their frozen and tinned counterparts.

Which? explained: ‘Once harvested, it can be weeks before fresh fruit and veg reaches our supermarket shelves and shopping baskets and during this time the levels of nutrients can deteriorate.

‘Frozen veg are steam-blanched immediately after harvesting, to kill any enzymes responsible for deterioration. 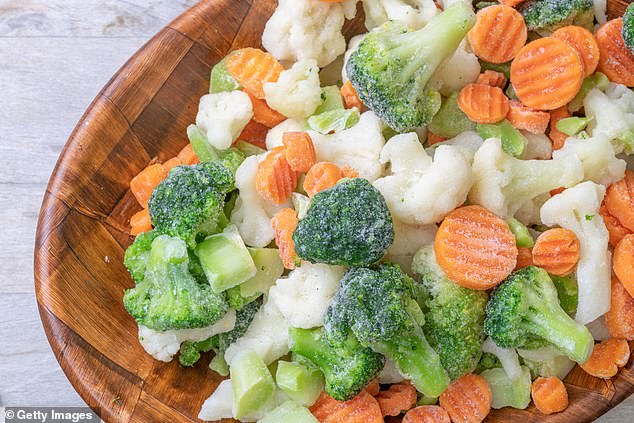 Frozen and even canned fruit and veg is often healthier, cheaper and tastier than fresh versions, according to consumer watchdog Which? (stock image)

‘This keeps the colours bright and gets rid of any bugs and germs.

‘Then they’re flash-frozen to ensure the vegetables are being preserved at their peak taste and nutritional value.

‘Because this happens within a couple of hours of picking, frozen peas, for example, are likely to be more nutritious than fresh ones – unless you’re lucky enough to pick them straight out of your garden.

Even canned produce can be healthier. The process of sealing and heating to kill bacteria can destroy some nutrients but it can also improve others.

Tomatoes, for instance, contain lycopene which is an antioxidant that can improve heart health but works best after it has been heated because the process helps the body absorb it better.

How long does your frozen food last?

* Whole chicken or steak – One year

It means frozen or canned versions work just as well when thrown into a meal as an ingredient.

Frozen vegetable mixes are also easier to prepare and use, while frozen berries, for instance, have the advantage over fresh in that they are available all year round.

However, it is important to choose tins and cans where the produce is not stored in syrup and has no added salt or sugar, Which? added.

They also pointed out that there are environmental and financial advantages to buying frozen and tinned food.

Fresh food is more likely to be wasted when it goes past its use by date after just a few days and frozen food often a lot cheaper.

For example, fresh broccoli costs on average £1.57 a kilo according to Which? research, while the frozen version is just 86p per kilo.

The report added: ‘Often fresh is viewed as best, and frozen and tinned are regarded as poor cousins.

But that’s not quite true – frozen and tinned fruit and vegetables are often just as good and can sometimes be better than their fresh alternatives.’

Related posts:
Gran accused of manslaughter after 11-month-old baby drowns in bath as she left room to get dressed
Shocking moment motorcyclist lets off FIREWORKS from his bike
Popular News
Chrissy Teigen and John Legend heartbreakingly reveal they have lost their baby boy
01/10/2020
Man Utd wonderkid Ramon Calliste, called ‘the next Giggs’, now owns luxury watch business and makes £5m a year – The Sun
26/03/2020
Megan Thee Stallion Addresses Criticism Over Twerking: ‘I Love to Shake My A**’
26/03/2020
Police guard shops to stop coronavirus panic-buyers and enforce social distancing – The Sun
26/03/2020
Coronavirus: Good Morning Britain’s Dr Hilary reveals ‘game-changing’ self-testing kit
26/03/2020
Recent Posts
This website uses cookies to improve your user experience and to provide you with advertisements that are relevant to your interests. By continuing to browse the site you are agreeing to our use of cookies.Ok