Home » Lifestyle » Can YOU find the one zebra without a pair?

Can YOU find the one zebra without a pair?

Can YOU find the one zebra without a pair? Tricky seek-and-find puzzle challenges you to find the odd one out of the herd

This playful new seek-and-find puzzle challenges you to find the only zebra that doesn’t have a pair.

The vibrant brainteaser is the work of Hungarian viral cartoonist Gergely Dudas, better known as Dudolf, who has built up a devoted online following.

In this puzzle, players must look at the zebra and identify the odd-one-out. 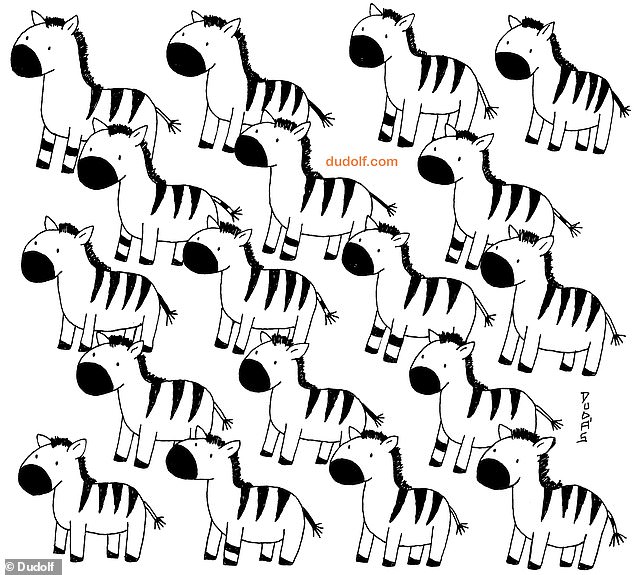 The vibrant brainteaser is the work of Hungarian viral cartoonist Gergely Dudas, better known as Dudolf , who has built up a devoted online following. Can you find the odd zebra out?

To make things even trickier, Dudolf has made only the slightest changes between the animals’ markings so you’ll really have to be eagle-eyed to spot the difference.

The black and white colour scheme makes things tough too.

Struggling to find the one zebra without a mate? Try looking towards the lower half of the image.

Still having difficulty? Then scroll down for the reveal. 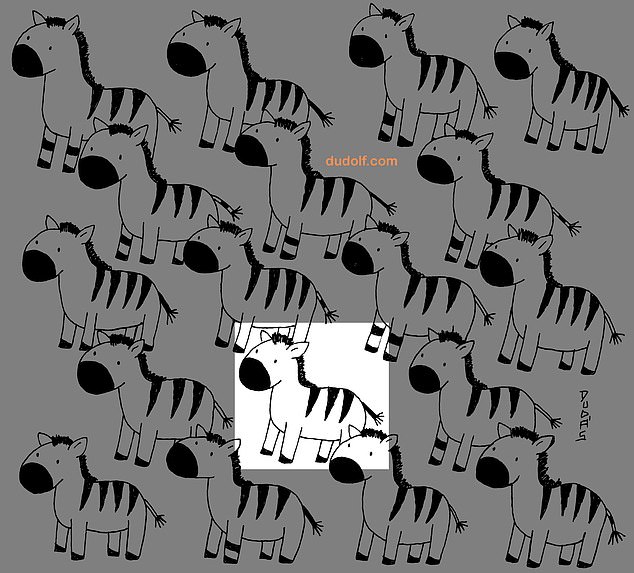 It comes after another seek-and-find puzzle challenged you to spot the sock hiding in a pile of laundry.

The current champion found the solo sock, which doesn’t have a pair like the others, in under 35 seconds.

Do you think you have what it takes to find the sock in less time and take the crown? 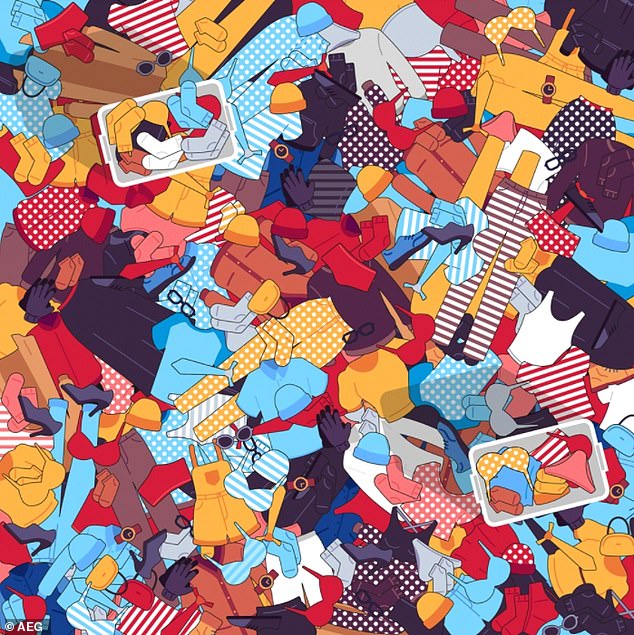 Can you spot the solo sock hidden amongst this load of laundry? Let us know if you can find it under 35 seconds and beat the record

The sock is hidden in laundry load, mixed with sweaters, t-shirt and underwear

Struggling to locate it? Focus on the small items in the drawing, like sunglasses and bras.

Still no luck? Try to go upward from the bottom of the picture.

If you think you’ve find the sock, or are just done search, scroll down to see the answer. 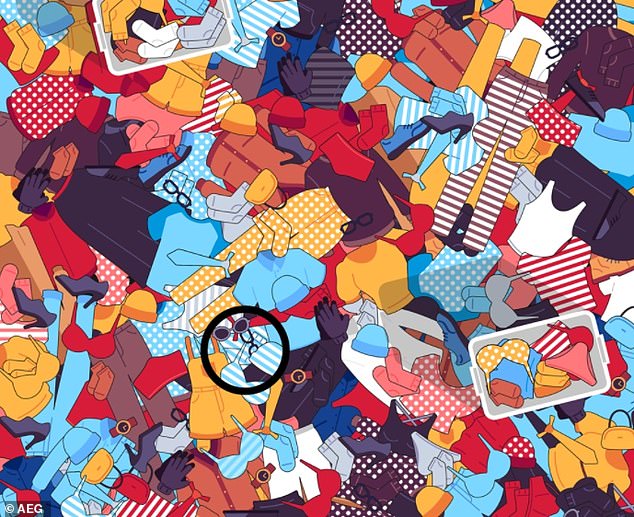 Ta=dah! The sock was hidden behind this pair of sunglasses and next to a bikini top in the same fabric

While brainteasers that challenge puzzlers to spot the hidden object are wildly popular, this next picture puzzle offers something a little different.

Challenging puzzle fans to spot the correct water source for a shower, it’s causing even the most eagle-eyed players to stumble.

The test involves tracing the water source along the pipe leading back to the shower at the centre of the brainteaser, and speed is of the essence.

According to the creators it takes an average of 34 seconds to solve correctly, but do you have what it takes to set a new record?

Scroll down for reveal 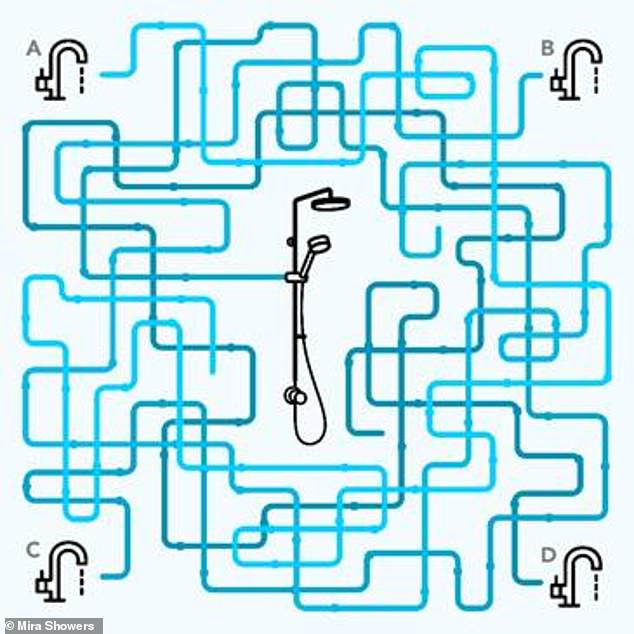 Those whose observation skills are a little rusty, should be able to solve the puzzle,  created by Mirs Showers, by tracing the line connected to the shower back to its source.

If you’re unable to work out the challenge, try taking a closer look at where the line from water source C leads to.

Many other mind-boggling brainteasers have been created to keep observation skills sharp. 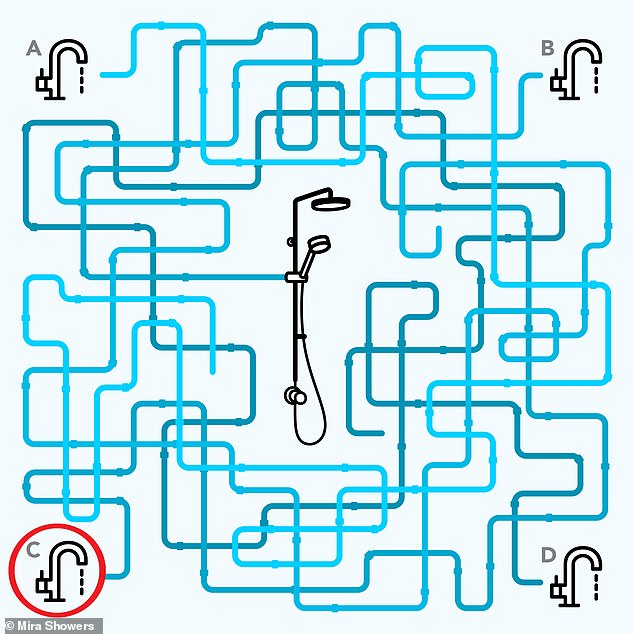 If you follow the path connected to the water source backwards, C is revealed as the correct source in the busy puzzle

An eco-friendly plastic company has challenged puzzlers to find all 12 recyclable items hidden in the kitchen.

British-based company HLP Klearfold hopes to raise awareness a brainteaser which encourages players to open their eyes to what items can be recycled.

So, do you think you have what it takes to find all 12 recyclable products hidden in the kitchen below?

The record time to beat is 15 seconds, and keen observation will be needed to complete the brainteaser even faster. 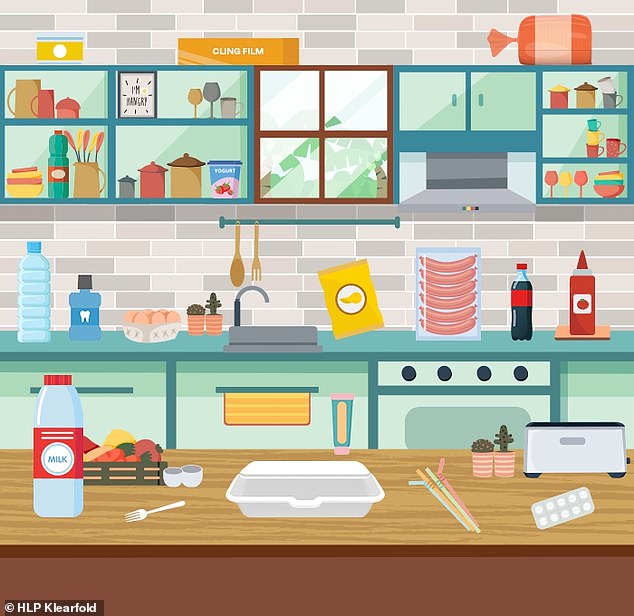 Are you a recycling whizz? Do you think you can find the 12 recyclable items in the kitchen in this brainteaser from British eco-friendly packaging company HLP Klearfold?

Scan all the items in the kitchen and think about which one belongs in the waste bin, and those which should go in the recycling.

Feeling a bit stuck? You’re not alone, research by HLP Klearfold found that consumers in the UK want more advice when it comes to recycling.

Need a bit of extra help? Some of these items may look like they should be recycled, but not all of them do.

Give up? Scroll down to see how you fared and learn more about good recycling habits. 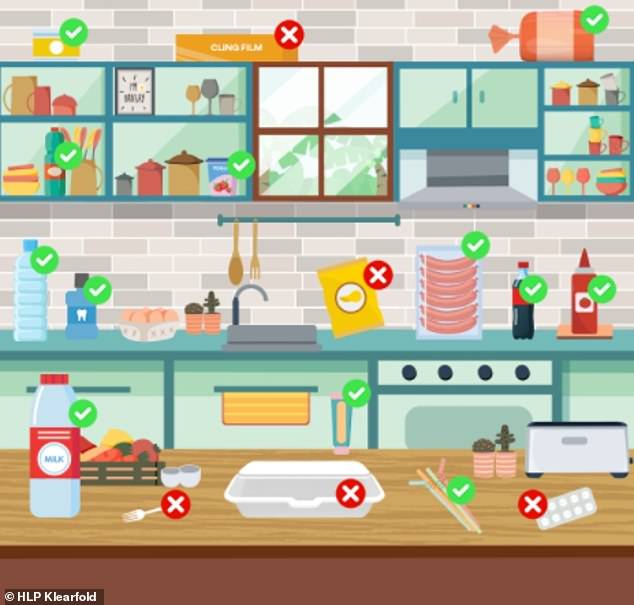 Here are the answers? How did you fare? Did you beat the record time of 15 seconds? Let us know in the comments

While spring has been a bit of a washout so far, another fiendishly difficult seek-and-find challenge will treat puzzlers to the sight of a colourful garden in full bloom.

The challenge, featuring an array of colourful blooms challenges players to spot the white lily hiding among the roses and blue hydrangeas.

The brainteaser created by UK-based company Reassured will put even the most eagle-eyed puzzlers to the test.

The puzzle takes the average person 32 seconds to complete – but can you solve it any quicker? Scroll down to try your luck. 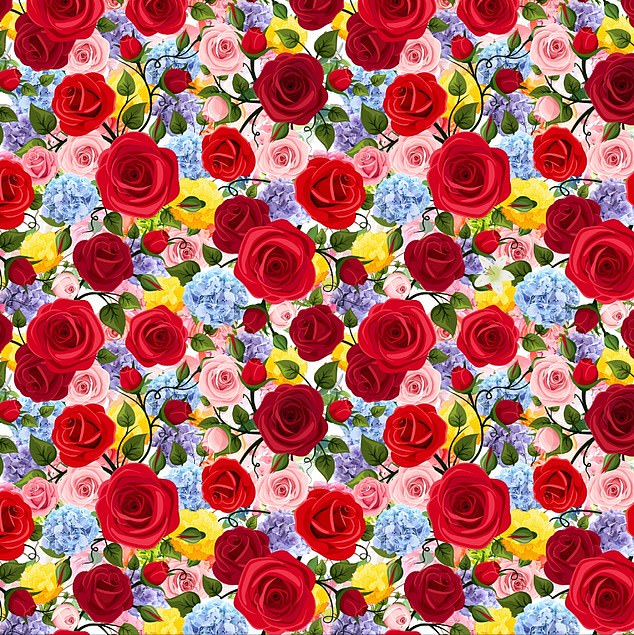 Still looking among the clusters of blue and yellow flowers? Scroll down to find the answer circled in red.

Another new challenge created by London-based company Free Office Finder has a record time of 64 seconds to beat.

It challenges players to spot the computer mouse hiding among the office equipment. 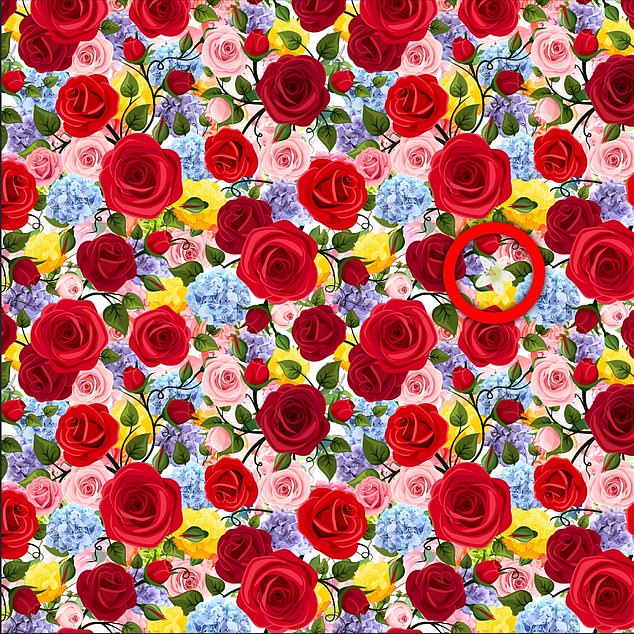 Still looking for the lily among the roses and clusters of blue and yellow flowers? It’s located on the right