A particular wooden toy or book or game stays in a child’s life in a way that many modern throwaway gifts never do, sparking the imagination and providing ­education and fun. So whether it’s a personalised doll, a ­challenging puzzle or a hand-crafted rocking horse, let us help you pick a British-made gift which could be handed down for ­generations to come.

When Simon Wolfers dreamt up a plan to handmake toy

rocking sheep and lambs in the early 1990s, it wasn’t because of his surname.

“Sheep and lambs ­feature in many nursery rhymes and children’s stories, and I wondered why no one had developed the idea into rocking toys,” he says. “As I live in the heart of sheep country in North Wales, it seemed like a good idea.”

His woolly flock are made near Snowdonia National Park but are shipped all over the world to children eager to have a cuddly rocking partner. His designs, above, use natural British materials and each ­finished heirloom is delivered to the customer’s door fully assembled.

Simon adds: “They are not just ­gorgeous and fun but practical too – our traditional bow rockers can be used on carpet as well as tile, stone and wooden floors.”

A cuddly teddy is not just a stuffed toy, it’s a friend.

The oldest and last remaining British teddy manufacturer celebrates its 90th anniversary this year. Each one of its beautiful soft toys is lovingly hand stitched at its factory in Ironbridge, Shropshire.

“It means so much to all the team in Ironbridge to still be flying the flag for British teddy bear making, all these years after our founder Gordon Holmes first brought Merrythought to life,” says Sarah.

“Making a Merrythought bear is a delicate 15-stage process that is carried out largely the same way as it was 90 years ago.”

The story of Merrythought began in 1930 when Gordon Holmes, owner of a mohair spinning mill in Yorkshire, recognised an opportunity to make handsome bears from the same fleece.

The inaugural collection was designed in 1930 by Florence Attwood who was deaf.

“She was a remarkable pattern maker who overcame many challenges associated with being unable to hear or speak to create some of our most iconic designs,” says Sarah.

Now in its fourth-generation, the family brand is beloved by celebrities and royals including future King Prince George.

An ‘Edward’ bear was the inspiration for Winnie the Pooh, with six-foot versions gracing the red carpet for the premiere of Goodbye Christopher Robin. 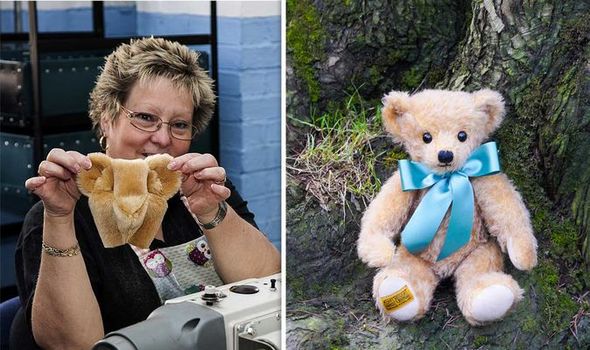 Grandchildren who simply cannot wait until they are 17 to get behind the wheel will be beside themselves with excitement at the thought of receiving a ride-on electric car hand-built by Toylander.

The vehicles are modelled on real-life brands including Land Rover, Unimog and a MB43 jeep.

The original kids kit car was the Mayfair back in 1987 and this year the company launched its Toylander 3, based on the 1972 Series 3 Land Rover.

Each car can be built entirely from kits, or supplied fully assembled and ready to drive in the colour of the customer’s choice. The body of each car consists of a wooden structure encased by steel work, plus full working lights, a horn and indicators. They offer a controlled throttle speed to give youngsters real driving skills. 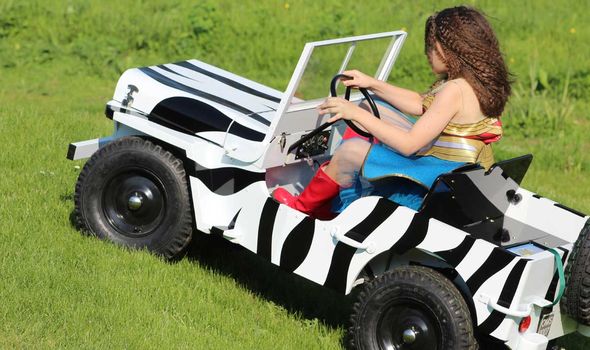 Rachael Attwood Hamard stems from a long line of tailors dating back to the 1880s and is the fourth generation of coat makers in her family.

Her elegant award-winning designs are traditional yet timeless, each one crafted by hand from premium wool.

There are a fabulous range of styles including trench, pea, reefer and dress coats.

“We are proud to benefit from the skills of a diverse workforce in London, support the country’s historic cloth mills, as well as keep our 120 year heritage in London coat making alive, says Rachael.

Karin Duguid, founder and designer of Kids Love Colour, laughs as she talks about her “two kid” guarantee for her clothing range.

“My daughters are now teenagers but I remember the frustration of buying leggings that ended up with holes in the knees after one trip to the park,” she says.

Her eye-catching children’s line features bright colours and classic stripes, and are all made from 100 per cent certified organic cotton. Karin says: “I have built my brand in partnership with a family-run, ethical ­factory who manufacture the Kids Love Colour range in the heart of Leicester.

“I think it’s really important to buy British, particularly at this difficult time, and doing so will support the creative and manufacturing skills of the garment industry to create high quality, long lasting clothing”.

kidslovecolour.com – use code BRITISH15 for a 15 per cent discount. Code valid for six months from December 11, 2020 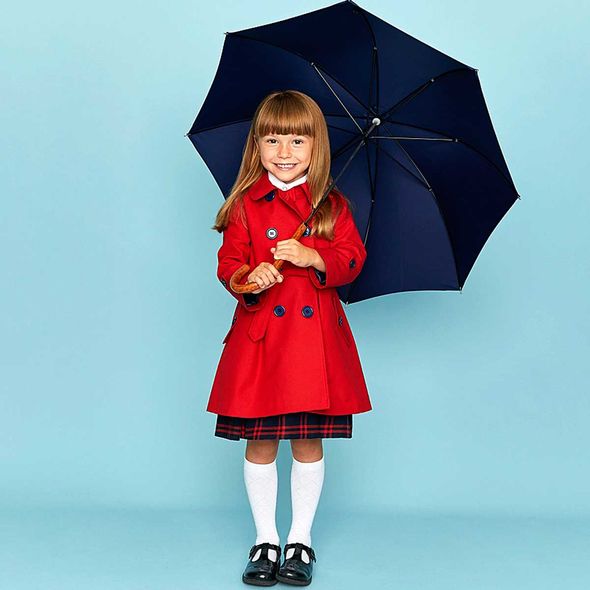 From rainbow-coloured alphabet and number blocks, above, to nature wheels, every one of her heirloom toys is fashioned from sustainable materials and completed with intricate finishing touches applied by hand. Selina started Hellion Toys as a new mum shortly after finishing a design doctorate and is a proud member of the British Toymakers Guild and Heritage Craft Association.

Earlier this year she was awarded the

Let Toys Be Toys 2020 Good Practice award for banishing gender stereotypes with her unisex creations, which are CE certified.

She says: “I draw inspiration from everything around me, most especially nature. I hope each toy is played with and loved as much as I enjoy making them, all with a generous sprinkling of Hellion mischief thrown in for good measure.” 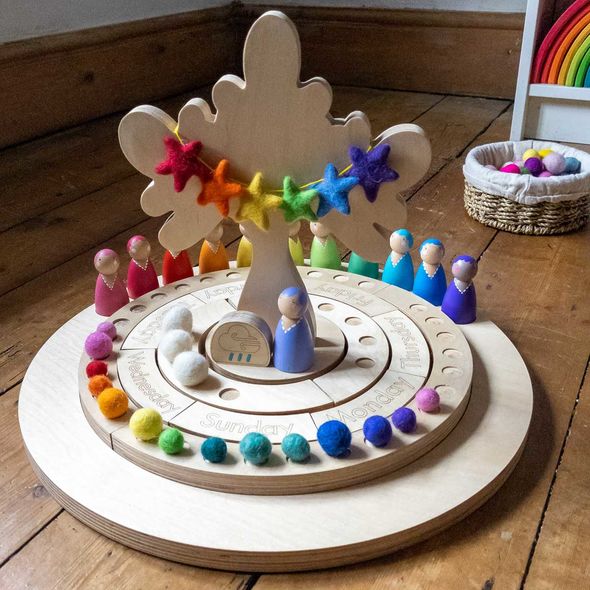 Dollmaker Rachel Murrell makes her 14-inch heirloom dolls, left, from her studio in Kent. Each one is traditionally joined by hand using linen thread and stuffed with Romney Marsh wool. The result is cuddly dolls with flexible limbs – the perfect playmates.

Rachel makes removable clothing to allow young ­children to practise dressing and role play, an important part of their development. The dolls carry the CE safety mark and contain no hard parts.

Rachel says: “It has been a difficult year in all respects with homeschooling my children and without having the usual platforms to promote my dolls as all fairs and a pop-up shops I had booked have been cancelled. Please support British businesses.” 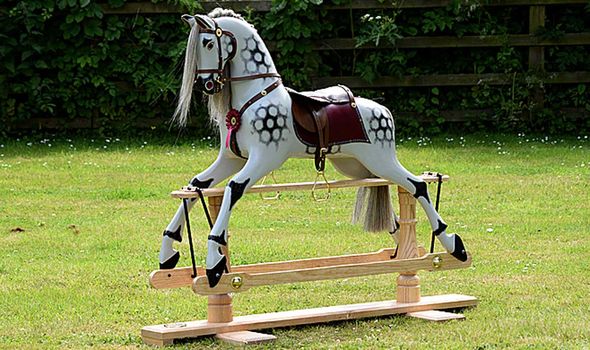 A beautifully-made rocking horse remains one of the most treasured gifts a child can receive and The Rocking Horse Shop has designed, made and restored rocking horses for more than 40 years. Each design is handcrafted and finished by a highly-skilled ­experienced team in Yorkshire workshops.

The horses come in a range of styles and sizes for children of all ages, with quality accessories. Restorations are available as are carving courses to enable people to make their own horse head or laminated half-size rocking horse.

When entrepreneur Rob Law appeared on BBC2’s Dragon Den in 2006 with his ride-on children’s suitcase Trunki, he left empty-handed after a handle broke and his design capabilities were questioned.

But he had the last laugh because his award-winning invention now sells millions of units worldwide. He has extended the range to folding scooters, child reins and more.

While a Trunki suitcase is not technically a toy, try telling that to any child begging for a tow around a busy airport or a place to sit when tired and bored of queueing.

New for 2020 is the Abbie the Ambulance Trunki, which the makers say is Biomaster protected, meaning bacteria cannot survive on its surface.

The mini NHS hero is white in colour with black wheels, a yellow nose, red handles and an ambulance-themed print.

Each one is proudly designed and made in Britain, and comes with a free five-year guarantee.

Related posts:
Palaeontologists uncover 47-million-year-old fossils of world’s oldest species of python
The huge honor Kelly Clarkson will receive in 2021
Popular News
Tricky optical illusion quiz challenges you to read the hidden words
21/01/2021
Man Utd wonderkid Ramon Calliste, called ‘the next Giggs’, now owns luxury watch business and makes £5m a year – The Sun
26/03/2020
Megan Thee Stallion Addresses Criticism Over Twerking: ‘I Love to Shake My A**’
26/03/2020
Police guard shops to stop coronavirus panic-buyers and enforce social distancing – The Sun
26/03/2020
Coronavirus: Good Morning Britain’s Dr Hilary reveals ‘game-changing’ self-testing kit
26/03/2020
Recent Posts
This website uses cookies to improve your user experience and to provide you with advertisements that are relevant to your interests. By continuing to browse the site you are agreeing to our use of cookies.Ok