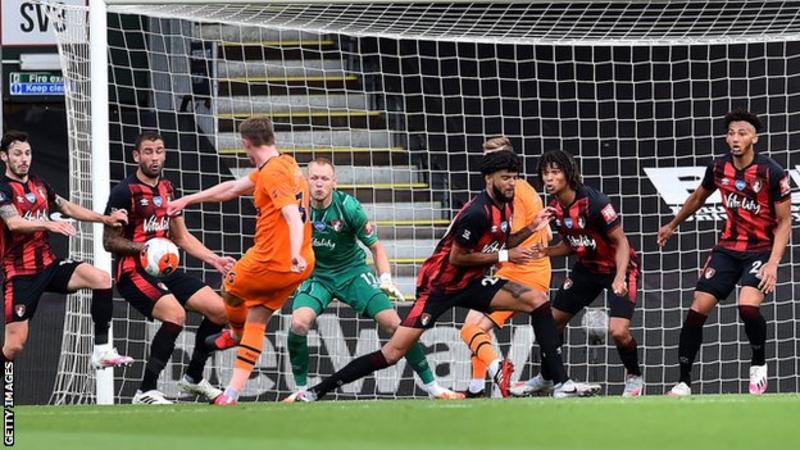 Bournemouth’s Premier League survival was dealt another blow as Newcastle beat them comprehensively with an exciting performance at Vitality Stadium.

Jefferson Lerma’s mistake was punished by Dwight Gayle to give Newcastle an early lead and Cherries manager Eddie Howe shook his head in frustration as Sean Longstaff made it 2-0 within half an hour.

Bournemouth hit the woodwork twice in the second half but could not recover once Miguel Almiron netted a third for Newcastle.

Substitute Valentino Lazaro made it 4-0 after he was slipped in by Jonjo Shelvey and he hit the post moments later, before Isaac Hayden skewed the rebound over from a few yards out.

Dan Gosling bundled in a consolation goal in stoppage time for Bournemouth, who now sit second-from-bottom of the Premier League with six games remaining. 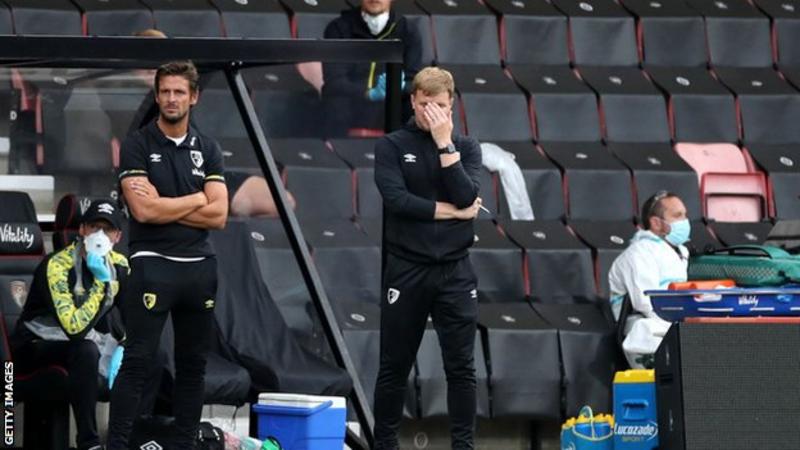 Relegation now seems a matter of when and not if for Bournemouth, who desperately needed points from this game.

Manager Eddie Howe said their situation “hurt deeply” following their recent 1-0 defeat by Wolves; against Newcastle, his players looked like a team resigned to going down rather than one fighting to stay up.

Lerma’s early mistake summed them up – his poor first touch invited pressure from Longstaff, who won possession back for Newcastle. From that point on, Bournemouth looked shaky, short of confidence and reluctant to play out from the back.

They were punished by Gayle, who showed composure in front of goal for the opener, while Saint-Maximin continued to torment the Bournemouth defence for the impressive hour he was on the pitch.

Howe’s half-time team talk seemed – momentarily – to kick some life into his side as Dominic Solanke’s deflected shot bounced off the inside of the left post but Joshua King was offside when he headed in the rebound.

Any hopes of a comeback, though, were dashed minutes later when Almiron clipped it into the top left corner to make it 3-0 to Newcastle.

David Brooks curled a shot on to the crossbar for Bournemouth, for whom it looked like being a blank evening until Gosling got on the end of Nathan Ake’s header seconds before the full-time whistle.

Howe, who looked dejected throughout, walked off the pitch with his head hung low, while some of the Bournemouth players crouched down on the pitch at full-time.

The result leaves second-bottom Bournemouth fighting for their safety with six games remaining and they still have to travel to Old Trafford and Etihad Stadium, as well as welcoming Tottenham and Leicester to Vitality Stadium. 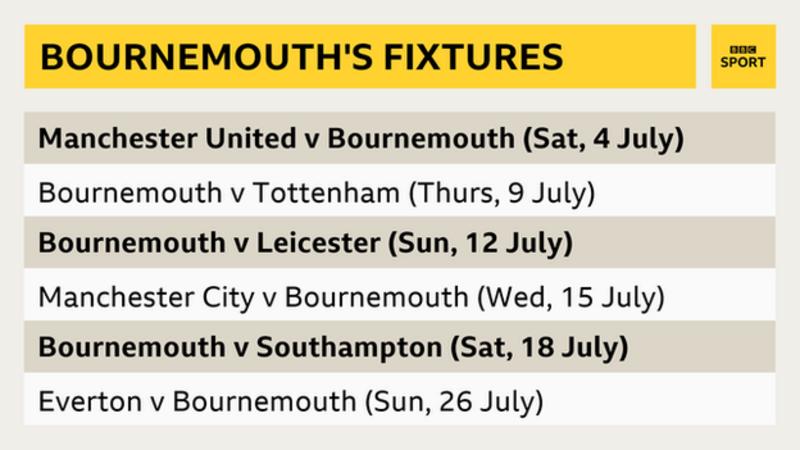 Sharp Newcastle get off to dream start

Newcastle boss Steve Bruce said before the game his side had a “wonderful opportunity” to break into the Premier League’s top 10 by the season’s end.

His optimism has clearly rubbed off on his players as they got off to a rapid start – Gayle scoring within five minutes.

It made amends for the striker’s shocking miss in Sunday’s FA Cup quarter-final defeat by Manchester City and set the tone for a comfortable first-half performance from Newcastle.

Saint-Maximin, the playmaker Newcastle can’t seem to manage without, then produced the goods after half an hour when he deceived three defenders on the left and put a chance on a plate for Longstaff to fire into the roof of the net.

While Bournemouth’s heads went down, Newcastle started to play with freedom and expression.

Saint-Maximin took on defenders at any opportunity, Shelvey’s passing was full of vision and precision, while Almiron was a burst of energy when he came on.

And Newcastle will have a spring in their step after picking up three consecutive away wins for the first time since November 2016 and extending their unbeaten run to five games.

Man of the match – Allan Saint-Maximin 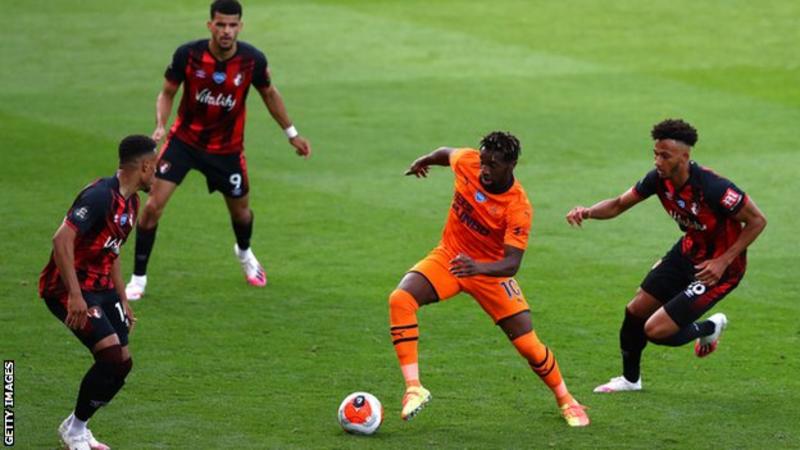 A decent run on the road – the best of the stats

Attempt missed. Nathan Aké (Bournemouth) right footed shot from the right side of the six yard box misses to the left. Assisted by Junior Stanislas with a cross following a set piece situation.

Dan Gosling (Bournemouth) wins a free kick in the attacking half.

Attempt saved. Andy Carroll (Newcastle United) left footed shot from the centre of the box is saved in the bottom left corner. Assisted by Jonjo Shelvey.

Federico Fernández (Newcastle United) wins a free kick in the defensive half.

Valentino Lazaro (Newcastle United) wins a free kick in the defensive half.

Miguel Almirón (Newcastle United) wins a free kick in the defensive half.

Attempt missed. Joshua King (Bournemouth) header from the centre of the box is too high. Assisted by Dan Gosling with a headed pass following a corner.

Attempt blocked. Junior Stanislas (Bournemouth) right footed shot from the left side of the box is blocked. Assisted by Dan Gosling.

Attempt missed. Andy Carroll (Newcastle United) with an attempt from the centre of the box is high and wide to the left. Assisted by Miguel Almirón with a cross.

Attempt missed. Isaac Hayden (Newcastle United) left footed shot from the centre of the box is high and wide to the left.

Valentino Lazaro (Newcastle United) hits the bar with a right footed shot from outside the box. Assisted by Nabil Bentaleb.

Goal! Bournemouth 0, Newcastle United 4. Valentino Lazaro (Newcastle United) left footed shot from the left side of the box to the top right corner. Assisted by Jonjo Shelvey with a through ball.Goal confirmed following VAR Review.

Steve Cook (Bournemouth) wins a free kick in the defensive half.

Federico Fernández (Newcastle United) wins a free kick in the defensive half.

Related posts:
Pressure mounts on UK government to release list of ‘air bridges’
Trump Calls Plan For Black Lives Matter Tribute In Front Of His NYC Hotel A ‘Symbol Of Hate’ — See Tweets
Popular News
First time Parole hearings allow Press in after John Worboys scandal
20/10/2020
Man Utd wonderkid Ramon Calliste, called ‘the next Giggs’, now owns luxury watch business and makes £5m a year – The Sun
26/03/2020
Megan Thee Stallion Addresses Criticism Over Twerking: ‘I Love to Shake My A**’
26/03/2020
Police guard shops to stop coronavirus panic-buyers and enforce social distancing – The Sun
26/03/2020
Coronavirus: Good Morning Britain’s Dr Hilary reveals ‘game-changing’ self-testing kit
26/03/2020
Recent Posts
This website uses cookies to improve your user experience and to provide you with advertisements that are relevant to your interests. By continuing to browse the site you are agreeing to our use of cookies.Ok