It’s been a long nine months of anticipation for followers of Bindi Irwin’s pregnancy — she’s due to give birth just about any day now — and fans couldn’t be more excited to watch Irwin and her husband, Chandler Powell, become parents. Over the weekend, many Instagram users speculated that Bindi had already welcomed her daughter into the world and just hadn’t shared the news. While the theory was quickly debunked by super-sleuth Instagrammers, Bindi’s brother Robert has now further confirmed that Bindi is still very much pregnant and is “glowing” — while admitting he’s been anxiously checking his phone for news of the baby wildlife warrior’s arrival. 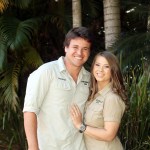 
Fans Think Bindi Irwin Had Her Baby Because of This Photo

“She’s doing good. She’s ready to go,” Robert told People. “We are all crossing our fingers. I think it’s going to be any day now. She’s doing great, she’s glowing. She’s getting to the point where she needs this baby out of there now. She’s a very small person with a very big belly at the moment.”

Chandler and Robert have an incredibly close relationship and in fact, it was Bindi’s little brother who walked her down the aisle in place of their late father Steve during her wedding with Powell. The siblings currently work together with Powell and their mother Terri at their beloved Australia Zoo. Now Robert is gearing up for another special title in Bindi’s life: uncle.

“I’m as excited as she and her husband Chandler are. I’m just over the moon to be an uncle. Uncle Robert — it’s going to be awesome,” he said.

“I’m checking my phone every chance I get. Every time she calls me I panic and go, ‘Is it time?’ And she’ll go ‘No, it’s not, calm down’” Robert told the outlet.

As Robert said, Bindi will be becoming a mother any day now — and we (and Robert) are so excited to see the family grow by one.

Childbirth is nothing like in the movies, as these beautiful photos show.