Giants coach Julie Fitzgerald says she was willing to release Caitlin Bassett because she believes the Diamonds captain had become distracted by her national commitments.

Bassett rocked the netball world on Thursday when she announced she would join the Waikato Bay of Plenty Magic on a one-year deal for 2021 after opting out of her contract with the Giants. 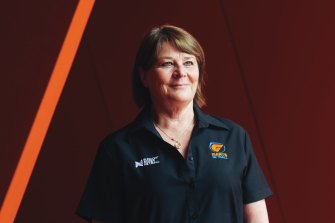 Fitzgerald said a “combination” of reasons led to Caitlin Bassett walking away from Super Netball.Credit:Rohan Thomson

"CBass [Bassett] doesn't come to me as the Australia captain any more than someone comes to me as a rookie or an international, so she came to me for the Giants," she said. "My role is to look after those players as Giants.

"It's a unit thing. It's not one player versus one player. It's how a unit works."

Bassett, who had been at the Giants for two seasons, was recently named in the Diamonds' 2020-21 squad in preparation for the Constellation Cup, which has been delayed until early 2021. It is yet to be seen whether the 32-year-old will retain the captaincy.

"We are looking for players who are looking to develop and grow," Fitzgerald said. "You can't rest on your laurels, you can't sit back and assume that things aren't going to keep happening, you have to keep proving and keep developing." 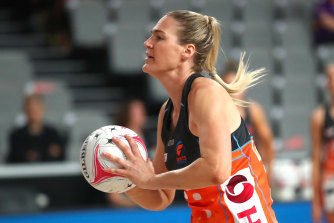 Bassett announced on Thursday she would join the Waikato Bay of Plenty Magic.Credit:Getty

Fitzgerald continually opted for shooting duo Kiera Austin and Jo Harten over Bassett as a result of the Super Shot.

Bassett is considered one of the best shooters in the world, but her main talent is her accuracy under the post rather than from the outer portion of the goal circle.

Fitzgerald said that other clubs "weren't in a position to sign" a goal shooter which is why Bassett made the move across the Tasman.

The ANZ Premiership does not play the Super Shot.

"I have great admiration for someone like Jo Harten who has so much experience and so much sense and she is constantly working to be better at what she does and she comes back every year a little bit better than the year before," she said.

The whole competition was moved to a Queensland hub this year, with Bassett previously declaring she struggled with the lack of court time while away from home.

"I took 13 players to Queensland and I would be very confident in saying the majority of them were very happy with how things were going and how things were running," Fitzgerald said.

Related posts:
Stuck on five-kilometre leashes, we need someone to throw us a bone
Trump will do on-camera interview to prove health with Dr Marc Siegel
Popular News
Lockdown deaths could end up higher than Covid fatalities – we all should want to prevent that
20/10/2020
Man Utd wonderkid Ramon Calliste, called ‘the next Giggs’, now owns luxury watch business and makes £5m a year – The Sun
26/03/2020
Megan Thee Stallion Addresses Criticism Over Twerking: ‘I Love to Shake My A**’
26/03/2020
Police guard shops to stop coronavirus panic-buyers and enforce social distancing – The Sun
26/03/2020
Coronavirus: Good Morning Britain’s Dr Hilary reveals ‘game-changing’ self-testing kit
26/03/2020
Recent Posts
This website uses cookies to improve your user experience and to provide you with advertisements that are relevant to your interests. By continuing to browse the site you are agreeing to our use of cookies.Ok