Celebrity chef John Whaite has revealed his secret battle with an eating disorder for the first time.

The Great British Bake Off winner, 32, from Lancashire, appeared Channel 4’s Steph’s Packed Lunch today and said his struggles with his body image started when he was just a teenager.

John explained: ‘If I was making a batch of muffins and something went wrong in my life that day, or around that time, I would sit there and I would eat all 12 of the muffins and then I’d run to the bathroom and I’d make myself sick.’

The TV presenter, who has never spoken of his bulimia before, said he had ‘only accepted’ his problem as an eating disorder in the past two years, and called the experience ‘very raw’.

The chef said he still struggles to talk about the problem because he feels ‘guilty’ about those in the UK who have little to eat, saying: ‘One of the things I feel very shameful about is that…we talk about kids who have very little to eat at the minute in the UK, so to think that I throw up my food every now and again, I feel very guilty for that. But it isn’t something I can control…’ 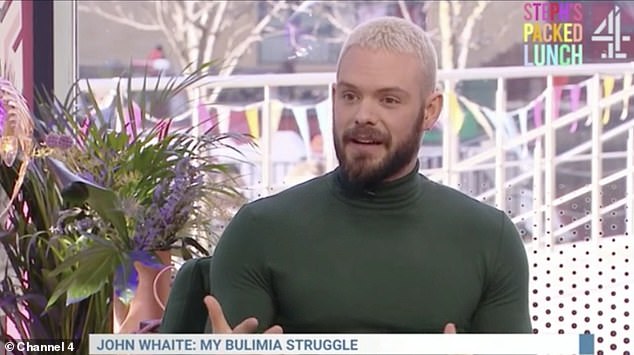 Celebrity chef John Whaite, 32, revealed his experiences with bulimia in an emotional film during today’s episode of Steph’s Packed Lunch (above) on Channel 4

He explained: ‘I’ve been very vocal in the past about my mental health issues… but one thing I haven’t really spoken about is my eating disorder.

‘My body image as I grew up was very difficult… I was so conscious of being fat. But one thing I was aware of as being problematic for 12, 14 years was overeating and then purging.

‘The painful forcing down of food and then that instant need to get that out of me.’

More than one million people in the UK are estimated to have an eating disorder, with one in four of these individuals being men. 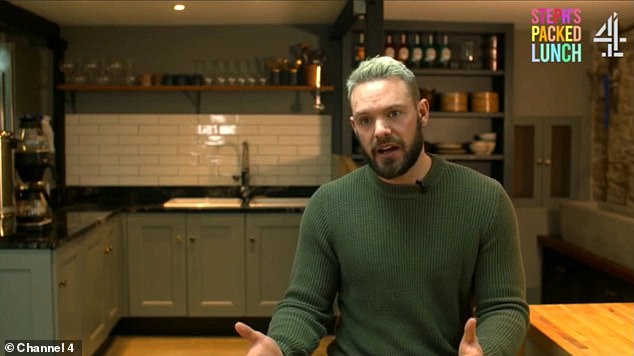 In the short film, John bravely admitted that his relationship with food has ‘at times been very complicated’ and said he struggled with his ‘body image’ as he grew up

John said the eating disorder had been very ‘difficult to overcome’ and explained he found it challenging to speak about due to the stigma surrounding eating disorders.

He explained: ‘I’ve only really accepted it as an eating disorder in the past 18 months, two years and it’s been very, very raw.

‘It’s been very, very difficult to overcome and I think that is down to the stigma of an eating disorder.

‘Especially as a chef, I didn’t really want to talk about it because I felt like it kind of undermined my entire career.

Bulimia is an eating disorder and mental health condition.

People who have bulimia go through periods where they eat a lot of food in a very short amount of time (binge eating) and then make themselves sick, use laxatives (medicine to help them poo) or do excessive exercise, or a combination of these, to try to stop themselves gaining weight.

Anyone can get bulimia, but it is more common in young people aged 13 to 17.

Getting help and support as soon as possible gives you the best chance of recovering from bulimia.

‘How can a chef who writes recipes books and cooks on TV, how can he realistically have bulimia?’

Speaking to host Steph, John said he feels like a weight has been lifted after opening up about his struggles, because he had felt ‘ashamed’ of his eating disorder.

Steph, who knows John well because he is the resident chef on the chat show, admitted that she did not previously realise that he was struggling with an eating disorder.

Speaking about the film, John said: ‘I feel a weight has been lifted in a way… I did feel very ashamed of it because not only am I a chef and it sort of undermines that side of my career…’

John revealed to Steph that he did not think it was a ‘huge problem’ but has been receiving help and support from a psychotherapist since being diagnosed.

He continued: ‘It feels good to talk about it. I’ve been an advocate for mental health since being on Bake Off and when I’ve talked to my psychotherapist about this, I didn’t really realise I had an eating disorder until about two years ago when she said, “This is bulimia”.

‘Until that point, I just thought it was a slight way of coping with overeating, I didn’t think it was a huge problem.’

John said that he hopes his own battle with an eating disorder will help other people to speak out about their own experiences and not stay ‘silent’.

Speaking about ‘toxic masculinity’, John admitted that he believes the real ‘poison’ is in staying silent and not seeking out any help.

He explained:  ‘A lot of people struggle, whether you’re a man, woman, non-binary… but I think men, in particular, are conditioned from a very early age not to talk about how they feel, not to cry, not to ask for help. 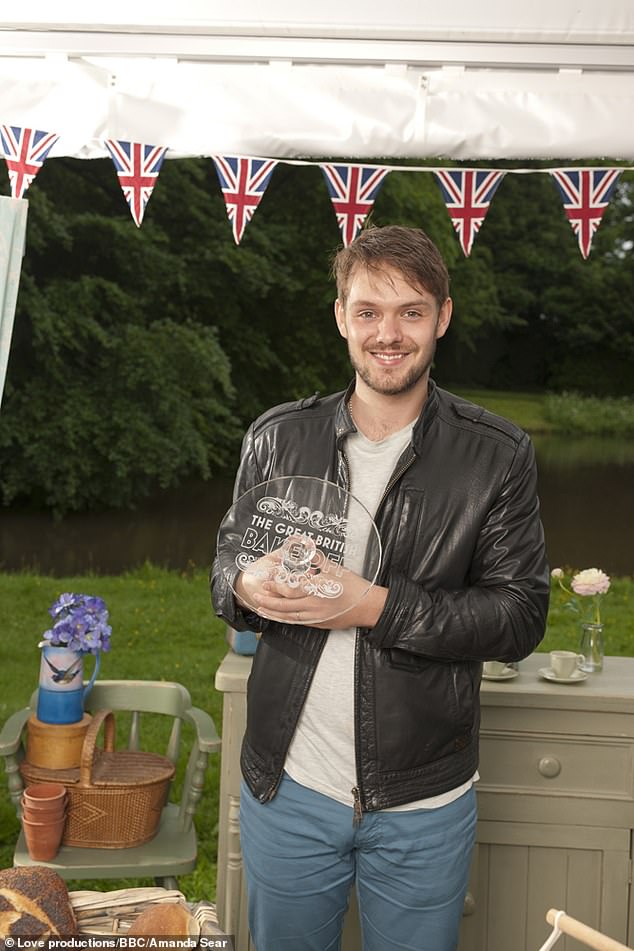 ‘We hear a lot about this phrase “toxic masculinity” but I think the real poison in manhood is silence… If men don’t speak it starts to erode them from the inside out.

‘When you share a problem and get a problem out of you, the toxic is diluted, the poison is diluted. I just want men to understand that, even if you’re the burliest bloke and you’re a builder, whatever you are, you need to talk to somebody.’

During the film, John also spoke to ambassador for eating disorder charity Beat Ben Robinson, who has suffered from anorexia since the age of 15.

He told John about his own spiral into decline, but admitted that he did not realise he had a problem.

Ben said: ‘I didn’t think I had a problem because only size zero models can have an eating disorder, only women get eating disorders, and that’s why I kept batting it off.’ 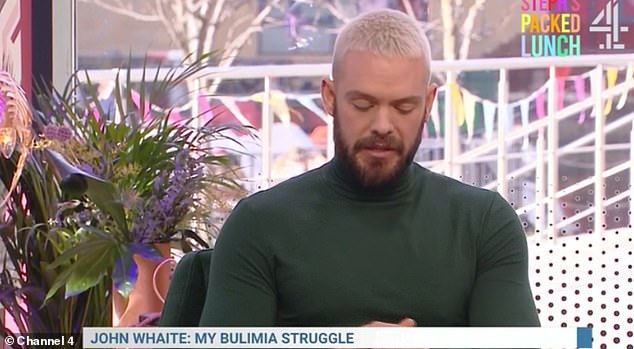 Ben was treated at an inpatient unit before being sectioned under the mental health act, with his recovery taking around seven years.

He continued: ‘I’d just kind of given up, I didn’t see any route out of the illness… If I didn’t go into hospital, I wouldn’t be where I am now.

‘The staff saved my life, but at the same time, my family and friends when I came out of hospital ensured my life was safe. I’ll never be able to repay them for what they’ve done.’

Giving advice to other people who might be struggling with an eating disorder, Ben said: ‘There’s this stigma that men can’t cry or feel weak. 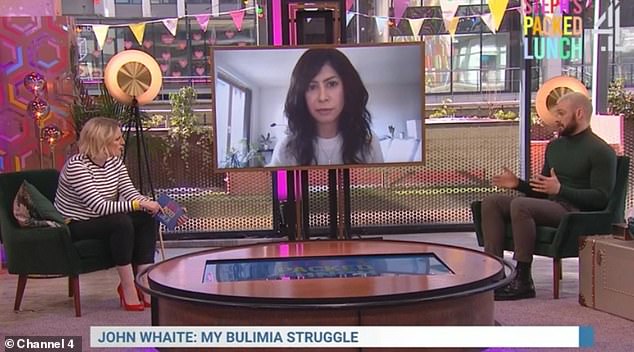 ‘If you’re feeling even just one percent different to how the normal positive you feels, speak to someone.

‘It’s better to talk about it than let it grow into something major. And if you’re somebody on the outside who thinks something’s not quite right there, don’t be scared to go up to them and say “I’ve noticed this, are you okay?”‘

If you have been affected by this story, please visit eating disorder charity Beat‘s website, phone their helpline 0808 801 0677 or visit Channel 4.