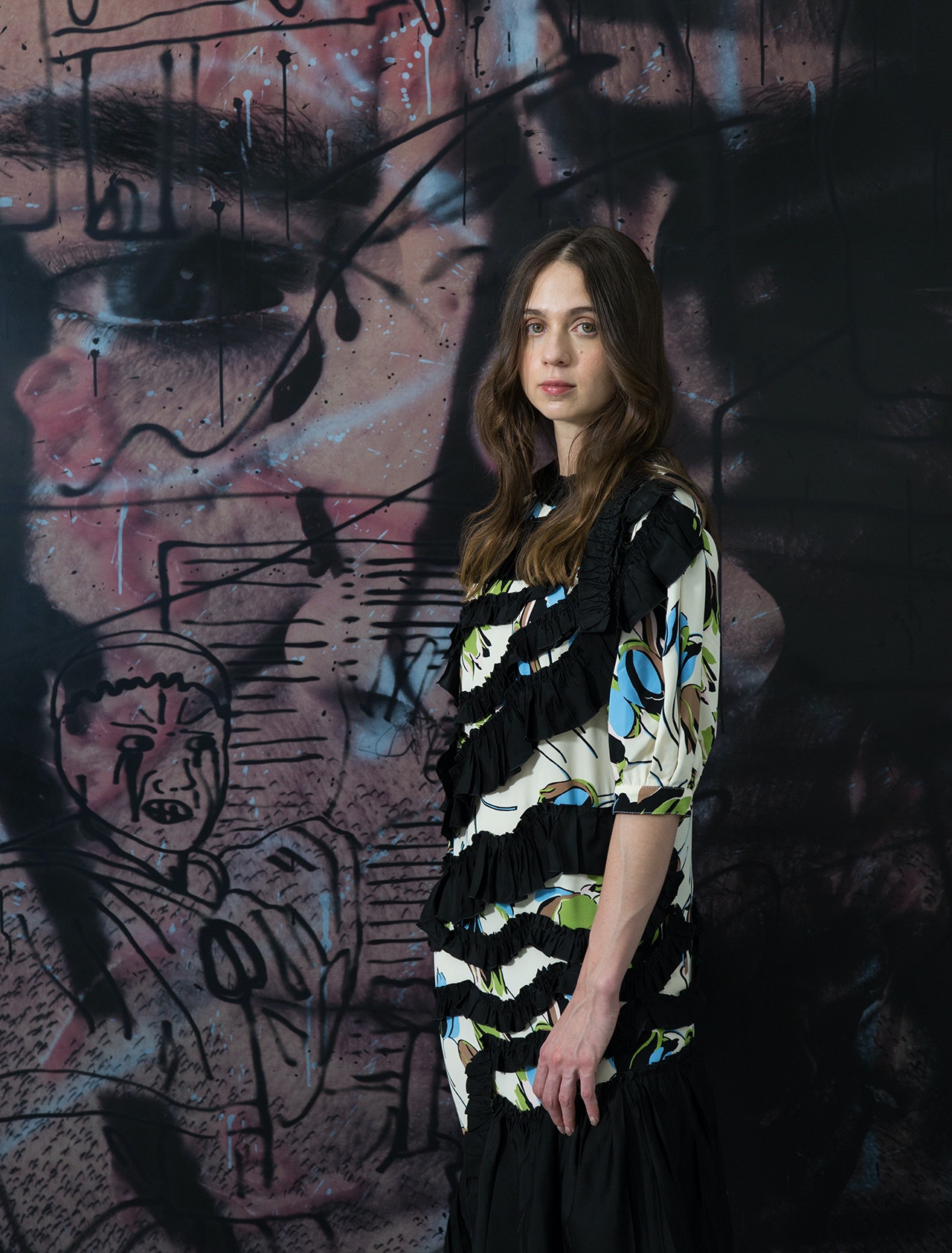 At some abyssal point in the Trump era, the painter Avery Singer became obsessed with the death of Robespierre. “I was taking out a lot of unconscious aggression and frustration,” Singer told me, on a sunny morning in her Brooklyn studio.

Several of her recent paintings refer to the French revolutionary who steered the Reign of Terror. In one, his face—dark gaze, full eyebrows, wig—filled the canvas. Thick black lines blotched over it like graffiti. Thinner, cartoonlike vignettes played across the surface: a body strapped to a guillotine gurney; the Internet meme Wojak, a cartoon face also known as Feels Guy, clad as Martin Luther hammering his theses to the wall; Wojak again, in a top corner, beaming down like a Renaissance cherub. Another work—also in airbrush, Singer’s dedicated medium—was more sober, in black and white, almost abstract on first view. It showed Robespierre’s wig, now free-floating and disheveled, with precise strands dangling like the tentacles of a jellyfish, and below it a narrow, rectangular item that people who vape might recognize as a Juul.

Singer in her Brooklyn studio with works in progress.

Her initial curiosity, Singer explained, had to do with a gunshot to the jaw that Robespierre suffered before being guillotined. Historians disagree about whether the gunshot was self-inflicted or the result of an attempt on his life. The video game Assassin’s Creed depicts this incident, with a female protagonist as the shooter. Singer’s reference image of Robespierre is not from a period illustration but from the game, hinting at some identification with the assailant.

Eventually, she said, those disturbing feelings subsided. “I realized this is me exercising violent ideas on a virtual object,” Singer said. The 2020 presidential election helped too: “There was some relief in reality.” But in the meantime, Robespierre, his wig, and his would-be assassin had joined Singer’s growing armada of recurring visual symbols and allusions, which draw on history and pop culture, computer graphics and bar bathroom scrawls, Old Masters and Internet memes.

Singer, 34, is the youngest artist on the lofty roster of Hauser & Wirth; this fall, her inaugural exhibition with the international mega-gallery takes place at its Chelsea location, in New York City. The market for her paintings has soared: One recently fetched over $4 million at auction. Seven of her works appeared in the main exhibition at the 2019 Venice Biennale, and she has had museum shows in Cologne, Vienna, Amsterdam, and Zurich—a trajectory sparked by her 2013 show at the Berlin gallery Kraupa-Tuskany Zeidler, which impressed European curators. “I was struck by the very individual language of painting that she had from the beginning, and how she combined high craftsmanship with the visual thinking that comes from the Internet,” the German curator Beatrix Ruf, who organized Singer’s 2016 solo show at the Stedelijk Museum in Amsterdam, told me. “Her paintings have only gotten more complex and layered.”

Singer is an innovator whose deceptively narrow commitment to airbrush, as the sole means for paint to reach canvas, belies the sophistication with which her work, mixing manual and digital tools, achieves its depth. She is an intellectual flaneuse—a former math nerd whose favorite art school class involved analyzing world events and their news coverage, and who is versed in critical theory. “She’s totally pushing the limits of what painting can do today,” said her friend Kathy Noble, senior curator and head of curatorial affairs at the performance art nonprofit Performa. Noble added, “She’s looking at a fractured culture and what that means for the individual, and for all of us.”

Singer is a New Yorker from perhaps the final generation of authentic bohemian TriBeCa kids, the ones who grew up with non-rich artist parents in chaotic downtown lofts, until the September 11 attacks on the Twin Towers traumatically shattered their world. (She was 14 at the time.) Her main requirement for her Hauser & Wirth debut wasn’t aesthetic or thematic—it was to hold the show in New York City. “I told the gallery I would like to have a homecoming exhibition in my hometown,” she said.

The artist and Kate Enman, her studio liaison and archivist, with Edgelord (Study), 2021.

Singer finds herself at a fruitful moment: entering the phase that one could call early midcareer, having found her language, developed it within self-imposed constraints, and now confidently drawing on the plenitude of her ideas and techniques. Back in 2013, three years out of the Cooper Union, she was designing her works in SketchUp, a 3D modeling program, and executing them in airbrush in a narrow palette of black, white, and grays—invoking cubist and constructivist antecedents, but with the binary sobriety of digital code.

Later, she started using color, and eventually delegated the painting itself to a robot of the type used to apply aircraft and race car livery. She began to show work made this way in 2018; the process yielded a striking self-portrait included in her Venice Biennale presentation the following year, in which she seems to point at the viewer from behind steamed-up glass, surrounded by a scrawled flotsam symbology—faces, bottles, crosses, smartphones—and blue and red marks that never quite settle in their depth of frame.

Singer’s early black and white works showed scenes from an artist’s life, like a studio visit or a performance art event, featuring block-form computer graphic characters. When color entered the picture, it often emphasized abstract forms, grids, and angles. Now her forms are more recognizable, yet also more fractured, layered, opaque. They are not obvious to read, but they clearly belong to the tormented present. “This might be one of the darkest shows I’ve ever done,” she said.

Singer working on a test print for Dereliction Island, 2021.

Singer’s work setup isn’t dark at all. The studio is a ground-floor space with natural light; through the front window, one sees trains running past on an elevated line. This is Bushwick, a neighborhood where artists roost, but Singer has separated herself from the big studio buildings and their social scene. “I really like being on my own, unbothered,” she said. She has just a couple of assistants, but she doesn’t use that word. “It’s nonhierarchical here,” she said. “We don’t need to make 50 paintings a year. We just need to make good paintings.”

In its climate-controlled room, the Art Robo was chugging away. A test print on paper was taped onto a large easel; a mechanical arm bearing airbrushes and vials of paint in five colors whirred up and down, left and right, close to the surface and away. First it took measurements, following instructions from a computer; then it came back and sprayed. “It’s super finicky,” Singer said. “It only operates at 70 degrees, and at a certain humidity.”

Singer learned about the Japanese-made machine when she was seeking to withdraw her hand altogether from the airbrush process. “I would have had to develop a robot that would airbrush digitally,” she said. “And then I researched it, and basically found what I had in mind.” She arranged to visit a dealership in Switzerland, near the Zurich airport, to learn to use the contraption, and she eventually bought one.

“The machine on its own is super banal,” she said. “So it’s a challenging thing: How do you make something compelling with this really banal method of painting?” The answer is to integrate it into a far more complex process that begins down the hall, in the room where she gessos her canvases, and continues with drawings, computer animations, and experiments with different substances for layering and masking. “As much as her process uses technology, Avery very much has the hand of the artist in the work,” Noble noted. Singer put it this way: “There needs to be some looseness in this work, some anarchy.”

Singer is named for a painter—Milton Avery—and her parents, Janet Kusmierski and Greg Singer, are painters, but she had no intention, initially, of following that path. At the Cooper Union, she tried metal, wood, video, film, performance, conceptual art—everything except painting and printmaking. “I was like, this is for the dustbin,” she said. “I had a dismissive attitude.”

An exhibition of the German artist Albert Oehlen’s black and white computer paintings disabused her of this notion. Even so, it took being broke after art school, unable to afford sculpture materials, to force her to paint, first on paper and then on Masonite board, the next cheapest surface. The airbrush was an immediate choice. “I had a leftover one lying around that I hadn’t even really used in school,” she said. It appealed to her as a way to improve on her pencil drawings, to make something more interesting.

Singer, with an industrial air purifier used in her studio, in front of (from left) Dereliction Island, 2021, and Wig & JUUL, 2021.

She had come up surrounded by street art, the tags and impromptu murals of innumerable graffiti writers who prowled downtown, including some of her friends. “I was never in graffiti culture, but I grew up surrounded by it,” she said. There was a legacy, too, of airbrush painting, a technique that had been created for commercial use in the late-19th century but that had pushed its way into fine art respectability in the 1970s. But more important antecedents, perhaps, are the inkjet-printer paintings of Wade Guyton (and before him, Jack Whitten), or the cross-media conceptual work, investigating digital culture without being Internet art, of artists like Simon Denny, a good friend of Singer’s. “Her artworks filter the confusion, the paranoia, the forces that drive us to present ourselves to others,” Denny wrote by email. “They’re very literate paintings: concrete, slick distillations of nowness.”

In the studio, Singer brought up the famous Nina Simone line “An artist’s duty, as far as I’m concerned, is to reflect the times.” Our times are politically gloomy, riven by injustice, yet visually and conceptually rich. Memes are an example, Singer said: “It’s a joke for someone who has the attention span of a GIF. Everything is geared for that attention span, which is really interesting to me.” This is also a fractured time, with physical life and digital life at once integrated and dissonant—even more so during a pandemic. Ruf, the curator, said that Singer’s recent self-portraiture aptly speaks to this condition. “What is the body in a digital world?” Ruf asked. “That is something that is addressed in her work as well.” During the pandemic, Singer had to stay put, like everyone else. She also faced a bad flare of endometriosis, the chronic illness that affects up to 10 percent of American women. “I was in pain the entire time I was making this show,” she said. She recently had surgery to remove multiple growths, and shared her hospitalization on Instagram. Between dismissive doctors and the American insurance system, she said, the deck is stacked. “There should be more awareness of this disease,” she said, “and issues around gender and racial equity in the medical field.”

As our chat ended, Singer prepared a turmeric brew and started to settle in for the day. Outside, the heat had turned stifling. Inside, works in progress awaited their next stage—a coat of liquid rubber, perhaps, or more test prints, or a canvas ready to go before the airbrush robot in its chamber. Singer has titled the exhibition “Reality Ender,” a possible reference to the ascendancy of virtual contact, to the world of video games, or to “a state of mind, like heavy inebriation.” Sober herself, she has a drunken figure as one of her stock characters. “Maybe she represents a version of myself,” she said. “I kind of end up being all of these things.”

The directions were open, she said. “Who knows what we’ll be painting in 10 years?”