Home » Australia’s Indigenous population may have been 3 million, study finds

Australia’s Indigenous population may have been 3 million, study finds

The Indigenous population of Australia may have once reached 3 million, triple the largest previous estimate, according to findings from a study that archaeologists worldwide hope can lead to international breakthroughs.

At the point of first contact with Europeans there was no organised effort to quantify the Aboriginal population, which was decimated by new diseases and frontier violence, but previous estimates of Australia’s pre-colonial population ranged from 30,000 to 1 million. 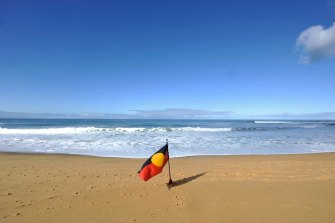 A new peer-reviewed study published on Friday in the journal Nature Communications used powerful computer modelling and applied a combination of methods incorporating the ecological, human and climate factors at play on the continent.

During the last Ice Age, the researchers calculated, there were 2 million square kilometres more coastal plain exposed compared with today and the larger land mass could have been home to more people.

The team of researchers from the Australian Research Council Centre of Excellence for Australian Biodiversity and Heritage looked at the period of human occupation over the past 60,000 years and found the Indigenous population may have reached 3 million or more on the Australian mainland at some point in that period.

“The innovation of our model is the fact that every other approach has used historical methods to reconstruct population numbers,” one of the researchers, Sean Ulm from James Cook University, said.

“But when Europeans began calculating, there had been decades of population reduction from introduced diseases and frontier violence, and the evidence was fundamentally flawed,” Professor Ulm said. “We are using a different set of principles to come at the same problem, asking what is the human, cultural and ecological principles about the productivity of the land from 60,000 years ago.”

Professor Corey Bradshaw of Flinders University said the modelled population estimate represented a maximum of “what’s plausible”, given the evidence.

“What we are saying is there’s no ecological evidence for the estimate to be lower at the time of the late Pleistocene.

“Looking at hunter-gatherer densities pre-European contact around the world, the figure of 3 million people within the area covered by modern-day Australia is not out of whack.”

Professor Bradshaw said the research team was already being contacted by archaeologists with requests to apply its analysis to other continents, and the team would also apply the model to later periods.

Australia and New Guinea were part of one landmass until about 10,000 years ago, when the last Ice Age ended and the sea level rose, drowning the land bridge beneath the waters of what is now Torres Strait. The same thing happened to the land bridge joining the mainland to Tasmania.

The mega-continent was known as Sahul and, according to the study, the human population of the entire land mass could have been as high as 6.5 million.

The research team conducted a separate but simultaneous study looking at how, when and where people trekked across the continent.

They mapped out the most likely migration pathways, or “superhighways”, people used when they trekked across the continent and found it could have taken humans just 5000 years not just to explore but to populate and settle right across the country – including down into Tasmania.

The lead author of the superhighways study, Professor Stefani Crabtree of Utah State University, an archaeologist and computational social scientist, said that when people entered a new landscape they would “want to know how to move efficiently throughout a space, where to find water, and where to camp” and would have oriented themselves to high points and other notable physical features.