Australia will step up deliveries of urgent medical supplies and other support to Pacific Island nations within days to combat the coronavirus pandemic while China prepares to ship more personal protective equipment to the region.

The charter flights carrying tonnes of equipment come as the Pacific Islands Forum moves closer to agreeing on the creation of a "humanitarian corridor" to the region to keep medical and food supplies flowing amid travel and movement restrictions. 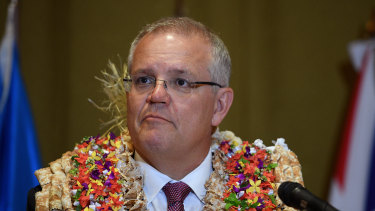 The Morrison government will look at how to use its $2 billion infrastructure lending facility, announced as part of the Pacific “step-up”, on projects that help the region recover from the pandemic. The $1.4 billion in foreign aid earmarked for the region this year will also be used to help island states prevent and combat outbreaks of COVID-19.

Unlike other places in the world, the Department of Foreign Affairs and Trade has kept all essential personnel in the region and all its posts remain open.

While there have been no major outbreaks of the virus in the South Pacific, there are growing concerns from governments in the region that many island states will eventually confront a major health crisis on top of the crippling challenges they already face due to the global economic downturn. The Asian Development Bank has warned COVID-19 will smash countries across the Pacific that rely on international tourism, with economic growth to fall by 0.3 per cent this year.

Fiji's capital went into lockdown on Friday, just ahead of a spike in cases over the weekend taking its total to 12. The Australian government has advised its citizens in PNG, which declared a state of emergency since last month, to leave as soon as possible.

Australia has been sending medical supplies and other support to Pacific Island nations but many have placed further restrictions on travel and movement over the past week, highlighting the need for a special agreement from the Pacific Islands Forum, an association of regional governments, to keep routes open.

China has been sending its own medical supplies including protective equipment to countries including Papua New Guinea, the Solomon Islands, Tonga, Vanuatu and Samoa, and has committed small sums of money to some in the region. It has also been trying to send supplies to Timor-Leste.

There is growing concern within Australia's intelligence agencies about Beijing’s growing influence in the South Pacific and its recent propaganda efforts, including claiming the US Army brought the epidemic to Wuhan, the centre of the outbreak.

International Development and the Pacific Minister Alex Hawke said Australia was working to fill "as many gaps as we can" including providing support for local testing services and public information campaigns and delivering medical supplies.

"As this crisis has evolved, we've worked very closely with governments to determine their needs now and in the future," Mr Hawke told The Sydney Morning Herald and The Age.

Along with a drop in tourism, there is a major food security concern, with many of the island nations relying on imported food.

Director of Lowy Institute's Pacific islands program, Jonathan Pryke, said it was vital the humanitarian corridor was open for medical supplies as well as "staple" goods like rice and vegetables. He said the lack of COVID-19 testing in Pacific Island nations was "definitely a concern".

"The capacity of their health systems are limited but Pacific countries have been taking it seriously. They acted fast in closing down the borders," he said. "Some countries may be likely to dodge the health impacts of COVID-19 altogether, others won't."

Australian Strategic Policy Institute defence program director Michael Shoebridge said it was likely the pandemic was a bit slower to hit the Pacific but he was concerned the lack of testing might be masking an outbreak.

Mr Shoebridge said Australia should be supporting the Pacific in addition to its aid commitments, not as part of a "redirection of existing arrangements".

He said the government should also consider using the Australian Defence Force to deliver supplies to isolated communities, such as the highlands in PNG and remote islands.

Leonard Blazeby, the head of mission in Australia for the International Committee of the Red Cross, said it was time for countries to boost resources for countries with weakened healthcare systems.

A spokeswoman for Médecins Sans Frontières Australia said it had no reason to think the reported numbers of COVID-19 infections in the South Pacific were incorrect but it was monitoring the situation.