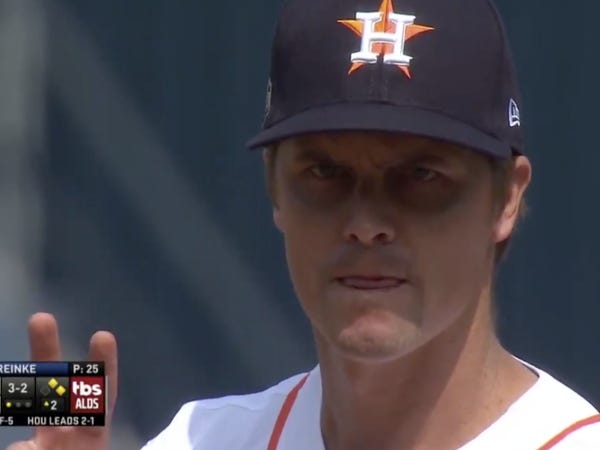 Houston Astros pitcher Zack Greinke made the puzzling choice to show his hitter what was coming, and it immediately backfired with a three-run home run.

Facing Oakland Athletics outfielder Ramon Laureano in the second inning, Greinke decided to dispense with the normal back-and-forth in secrecy with his catcher when deciding on a pitch.

Instead, he threw up a "two" with his fingers — signaling a slider — and dealt. Laureano met his pitch and sent it flying out of the ballpark to open up a 3-0 lead for the A's.

It's not often in sports that you see hubris punished so severely and so swiftly, but when it happens, it's extremely satisfying.

While the decision to reveal his pitch was rather baffling, it's not entirely without precedent.

Greinke pulled a similar stunt earlier in the season. Some fans saw it as a mea culpa for the Astros' 2017 sign-stealing scandal, in which the team was caught using cameras and trash cans to signal to Astros batters what pitch was coming their way

By Greinke's explanation, it was much simpler than that: He was just tired of the game moving slow.

"I don't like taking a long time with a man on second base, especially," Greinke told reporters when asked about giving away signs during a game in August. "I'm trying to find ways to speed that up. So far this year has been good, but it got messed up today."

Greinke added that he's not always giving away his pitch — sometimes he's playing mind games with his opposition. "Sometimes I call the same pitch that I throw," Greinke told the Houston Chronicle. "Most of the time it's not the same pitch."

Having a man on second is frustrating for a pitcher, as it makes calling the game much more difficult, so Greinke's gambit makes some sense, especially with his desire to keep things moving. It's also undeniably entertaining when it's working, but when it backfires, it looks pretty dumb — especially in the playoffs.

Related posts:
Sarah Harding ‘moves in with mum’ amid breast cancer battle ‘Been her absolute rock’
Former Indiana police chief dies after being stung by hornets ‘over 40 times’
Popular News
This Stunning Audition Had All of The Voice Judges in Awe: "That's Not an Easy Song to Sing"
27/10/2020
Man Utd wonderkid Ramon Calliste, called ‘the next Giggs’, now owns luxury watch business and makes £5m a year – The Sun
26/03/2020
Megan Thee Stallion Addresses Criticism Over Twerking: ‘I Love to Shake My A**’
26/03/2020
Police guard shops to stop coronavirus panic-buyers and enforce social distancing – The Sun
26/03/2020
Coronavirus: Good Morning Britain’s Dr Hilary reveals ‘game-changing’ self-testing kit
26/03/2020
Recent Posts
This website uses cookies to improve your user experience and to provide you with advertisements that are relevant to your interests. By continuing to browse the site you are agreeing to our use of cookies.Ok