Apple CEO Tim Cook has announced the iPhone manufacturer will be sending one  million face shields a week to healthcare workers fighting coronavirus.

The company has designed its own transparent plastic shields and is now mass producing them in both the US and China.

They will be sent to places in dire need of personal protective equipment (PPE) in the US initially, and then shipped overseas.

Apple’s boss also said in a video posted on Twitter that the company has secured 20 million surgical masks from around the world to help address a global shortage. 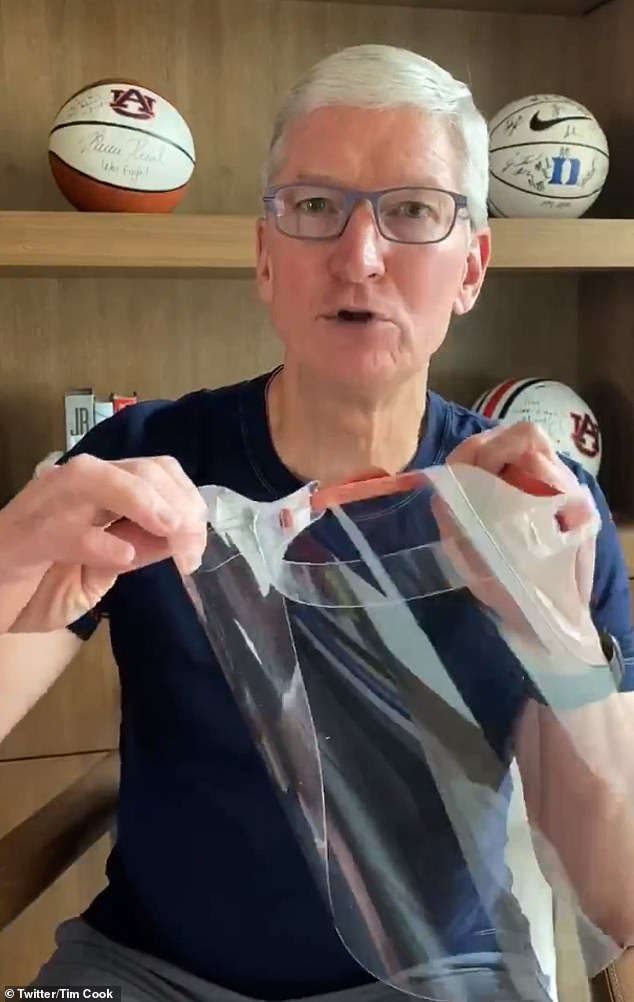 Apple CEO Tim Cook (pictured, holding one of the mask) has announced in a video on his Twitter account the iPhone manufacturer will be sending one million face shields a week to healthcare workers fighting coronavirus

In the video posted by Mr Cook, he said the first shipment had already been sent to Kaiser hospital facilities in Santa Clara, California.

According to Mr Cook, the reviews were ‘very positive’ and more will be sent to US locations by the end of the week.

One million masks will then be sent out every subsequent week to the hardest-hit regions, with a single box containing 100 of the plastic shields, which pack flat.

The virus, called COVID-19, is transmitted from person to person via droplets when an infected person breathes out, coughs or sneezes.

It can also spread via contaminated surfaces such as door handles or railings.

Coronavirus infections have a wide range of symptoms, including fever, coughing, shortness of breath and breathing difficulties.

Mild cases can cause cold-like symptoms including a sore throat, headache, fever, cough or trouble breathing.

Symptoms may appear 2-14 days after exposure.

Initial distribution would be focused on the US but the company hopes to ‘quickly expand distribution’ to other countries, he said.

Cook added the company’s priority ‘is on unique ways Apple can help’.

‘For Apple, this is a labour of love and gratitude and we will follow more of our efforts over time’ he says.

Vice President Mike Pence said last week that Apple is one of several tech companies based in California that are helping hospitals across the nation deal with a reported shortage of protective gear – especially N95 face masks.

In March, Apple said it was going to donate nine million N95 protective masks to help protect medical staff from contracting the coronavirus.

This figure has since risen to 20 million as US companies join the fight against COVID-19.

The mask shortage has been a major problem as doctors attempt to contain the coronavirus.

Doctors and nurses around the world have said they are in dire need of personal protective equipment (PPE) and having to reuse gear.

THE TRILLION DOLLAR RISE OF APPLE

The company’s journey to the summit of the technology industry has been a rocky one, having seen Jobs (pictured right in 1976) leave the firm in the mid-1980s after his pet project, the first Macintosh computer, struggled and he attempted to oust then chief executive John Sculley. Wozniak is pictured left

1976: Founders Steve Jobs, Steve Wozniak and Ronald Wayne created the company on April 1 1976 as they set about selling computer kits to hobbyists, each of which was built by Wozniak.

The first product was the Apple I.

1977: Apple released the Apple II in June, which was the first PC made for the mass market.

1984: The Macintosh was introduced during an ad break for the Super Bowl and later officially unveiled during a launch event. It was discontinued a year later and Jobs left the firm.

1997: Apple announces it will acquire NeXT software in a $400 million deal that involves Jobs returning to Apple as interim CEO. He officially took the role in 2000.

The then Chief Executive Officer of Apple, Steve Jobs, with the iPhone

2011: Jobs resigned in 2011 due to illness, handing the CEO title to Tim Cook. Job died in October from pancreatic cancer.

2014: Apple unveiled the Apple Watch. It also unveiled its first larger iPhones – the 6 and 6 Plus.

2015: After purchasing Beats from Dr Dre, Apple launched Apple Music to compete with Spotify and other music streaming services.

2016: Apple returned to its roots and announced the 4-inch iPhone SE. Meanwhile, the firm is embroiled in a legal battle with the FBI, involving the agency demanding access to the locked phone used by Syed Farook, who died in a shootout after carrying out a deadly December attack in San Bernardino, California with his wife. The court order was dropped on March 28 after the FBI said a third party was able to unlock the device.

2017: Apple introduces the iPhone X, which removes the home button to make way for a futuristic edge-to-edge screen design and a new FaceID system that uses advanced sensors and lasers to unlock phones with just the owner’s face.

2018: In a first for the company, Apple introduces new features in its latest operating system, iOS 12, that encourage users to manage and spend less time on their devices. The move was spawned by a strongly worded letter from shareholders that urged the firm to address the growing problem of smartphone addiction among kids and teenagers.

2019: In January, Apple reports its first decline in revenues and profits in a decade. CEO Tim Cook partly blamed steep declines in revenue from China.

2020: In March, Apple closes all its bricks and mortar retail stores outside of China in response to coronavirus.