Although “Silence of the Lambs” is one of the scariest movies of all time, Anthony Hopkins originally thought it might have more of a G rating.

During a conversation with his co-star from the 1992 film, Jodie Foster, for Variety, the actor, who played the cannibalistic Dr. Hannibal Lecter, recalled how he was first offered the Oscar-winning role. 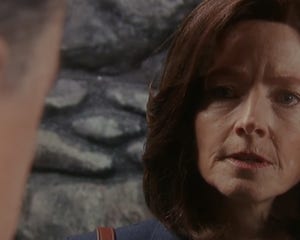 His agent quickly replied that the screenplay was definitely not a story for kids, but also revealed Foster was already attached.

“So it was a hot summer afternoon and then the script came over and I started reading it and after 10 pages, I phoned my agent,” Hopkins continued. “I said, ‘Is this a real offer? I don’t want to read any more because I want to know if there’s an offer. It’s the best part I’ve ever read.'”

Hopkins said his agent wasn’t sure if it was an offer, until the film’s director, the late Jonathan Demme, wanted to meet with Hopkins.

“I read the rest of the script, and Jonathan came over on a Saturday afternoon and we had dinner,” he added. “And I said, ‘Is this for real?’ And he said, ‘Yeah.’ I said, ‘Okay.’ He was such a wonderful guy to work with.”

As the production began taking shape, Hopkins admitted he was a bit intimidated by Foster, who would be playing the lead of FBI student Clarice Starling and had recently brought home the Academy Award for Best Actress for 1989’s “The Accused.”

“I couldn’t believe my luck, and I was scared to speak to you,” he confessed “I thought, ‘She just won an Oscar.'”

Even though both stars would eventually take home the Oscar for their respective roles — with the film fetching Best Picture as well — Hopkins said he was hesitant about stepping into the horrifying character.

Iconic Roles That Were Almost Played By Radically Different Actors

“I was naturally nervous, an Englishman — a limey like me, a Welshman — playing an American serial killer,” he explained. “And I remember Jonathan, when the camera picked me up, he said, ‘Oh, my God. That’s it. Hopkins. You’re so weird!’ And I said, ‘Why, thank you.'”

Foster added, “It has been a life-changing adventure for both of us I think. Number one because of the characters — because of Clarice and Hannibal life-changing characters — but also everything, the aftermath. I love how that movie has touched people. I’m sure you still get people come up to you and say, you know, ”Would you like a nice Chianti?’ and stuff.”