Anjanette Young, a Black woman who made headlines after Chicago police handcuffed her naked while raiding the wrong home more than two years ago, said on Wednesday that she feels “betrayed” by Mayor Lori Lightfoot as the city tries to dismiss her lawsuit.

Young and her attorney Keenan Saulter held a news conference outside City Hall, a move that comes as the social worker’s civil lawsuit makes its way through the courts. Young filed her complaint in February against the city and the police involved in the raid, accusing top officials like Lightfoot of conspiring to cover up the 2019 incident.

Saulter said the city had originally sought mediation in the case ― a type of dispute resolution in which a third party helps both sides negotiate a settlement. But with an answer to Young’s civil complaint due by Thursday, the city’s Law Department is now planning to file a motion to dismiss the case. A copy of a June 14 email obtained by HuffPost confirmed the plans by attorneys for the city and officers to try and dismiss Young’s complaint.

“I absolutely feel betrayed by the mayor,” Young said Wednesday. “So mayor, you can threaten to dismiss the case. I’m very certain, and I’m not an attorney, that we will move forward in court and if we have to go to trial, I’m ready to go to trial.”

A dozen male officers knocked on Young’s door down with guns drawn in February 2019, handcuffing her while she was naked and in distress. Police searched her apartment despite Young telling them dozens of times that they were in the wrong home. The raid, as well as the Lightfoot administration’s handling of Young’s attempt to obtain bodycam video of the incident, gained national attention that severely damaged the mayor’s reputation and led to the city’s top lawyer, his deputy and the Law Department’s spokesperson losing their jobs.

The mayor initially denied having any knowledge of the case until emails revealed the opposite. She publicly apologized to Young, and met with her in late December 2020 ― about two weeks after CBS 2 first released the shocking body camera footage of the raid. Lightfoot said she had told city attorneys to resolve Young’s lawsuit, according to Saulter.

“I believed her when we met in December, when she came to the table, explaining to me how she was very hurt and apologetic for what I had experienced, and that she was committed to making me whole, her words,” Young said Wednesday. “And yet here we are, almost six months later, and she’s threatening to dismiss the case.”

There is no disagreement on the fact that the botched raid was “traumatic for her and the community,” Law Department spokesperson Kristen Cabanban said in a statement, adding that the city “has remained committed to mending the harm done and finding an equitable and expeditious resolution to this matter.”

The department was “encouraged” when Saulter agreed to a mediation in which the city “assumed all costs,” and were “hopeful a robust discussion moderated by an experienced former federal judge would lead to a fair and judicious outcome ― one that would have fairly addressed Ms. Young’s traumatic experience, but also fair to the taxpayers.”

“Mr. Saulter chose to reject the city’s offers and walked away from further settlement discussions,” Cabanban said. “In light of Mr. Saulter’s decision, we have no choice but to litigate. We still believe this is a case that should settle, but Mr. Saulter will have to bring a different mindset to the table.” 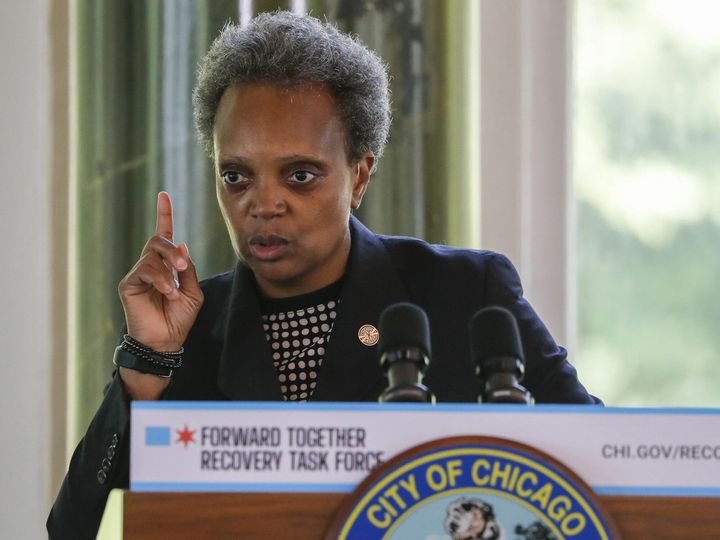 In response to the Law Department’s statement, Saulter said that the city “continues to disrespect” Young by trying to separate her from his firm and that the social worker made it clear on Wednesday that he only acts at her behest.

According to Saulter, the city made a “take it or leave it” offer about halfway through the May 27 mediation, which was scheduled to be from 9:30 a.m. to 5 p.m. The settlement offer was less than half the $2.5 million the city paid to settle a similar case, he said.

The city’s attorneys walked away from mediation “while we had another proposal on the table” that they “refused to further negotiate,” according to Saulter.

“My attitude has nothing to do with why this case hasn’t settled,” Saulter said. “Conversely, the city’s legal department and the City of Chicago have attempted to bully Ms. Young and me…and that will not continue.”

In April, Chicago’s police oversight group found almost 100 alleged instances of misconduct stemming from the raid on Young’s home. The Civilian Office of Police Accountability’s 16-month investigation into the raid described massive deficiencies in the police department’s policies and training, especially related to search warrants and the Fourth Amendment. COPA only opened an investigation on the day Young was set to receive the bodycam footage, blocking them from being turned over.

Earlier this year, the police department revised its search warrant policy by adding in new steps like requiring officers to account for vulnerable parties and, and to have a lieutenant or higher-ranking official at the scene.

But Young and Saulter said they want City Council to pass the Anjanette Young ordinance, a series of search warrant reforms that would, among other things, ban no-knock warrants, require diversity among raid teams and mandate an actual plan before taking action.