ALEX MORGAN revealed on Twitter that she could finally make her long-awaited Tottenham debut against Reading today.

The USA World Cup winner has been named in Spurs' team today, but most likely will not be starting. 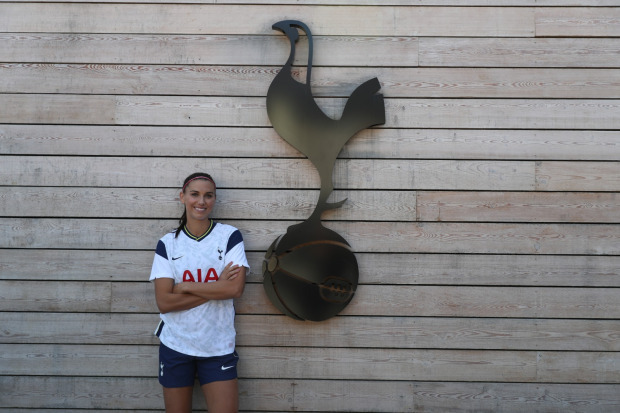 The North Londoners are preparing to host the Royals at The Hive today.

And Morgan, 31, wrote on Twitter: "Excited for my first match officially in with the squad.

The strike sensation penned a short-term deal until the end of December in a bid for regular game time to win a place in the USA squad ahead of the postponed Tokyo Olympics.

She has not played competitive football in over a year due to pregnancy, and she only gave birth to her daughter, Charlie, six months ago.

Morgan was named on the bench for Spurs' FA Cup quarter-final tie with rivals Arsenal at the end of September, but she hasn't been included in the squad since.

The clock is ticking, given that her contract only runs until the end of 2020.

And the Orlando Pride ace dropped a huge hint that she won't be sticking around in the WSL on a permanent basis after her loan deal expires.

At the end of last month, she told AP Sports,"I have a plan to go back for the holidays, but you just don't know if I'm planning to continue on here or not

"It all really depends on Covid, and the NWSL as well and what their plans are for next season so I feel like I'm taking it week by week.

"One thing I know is that I want to go home and introduce Charlie to my family because I’ve kind of snatched her away and took her to England with me."

Orlando boss Marc Skinner reportedly hopes Morgan will return from her contract in England in time to join the Pride next spring for preseason ahead of the 2021 NWSL season.

Related posts:
Britain forked out '£1million per patient' to treat Covid-19 victims at Nightingale hospitals
Netflix Testing Its First Live TV Channel In France
Popular News
FIFTY NHS hospitals ready to roll out Pfizer Covid vaccine next week
02/12/2020
Man Utd wonderkid Ramon Calliste, called ‘the next Giggs’, now owns luxury watch business and makes £5m a year – The Sun
26/03/2020
Megan Thee Stallion Addresses Criticism Over Twerking: ‘I Love to Shake My A**’
26/03/2020
Police guard shops to stop coronavirus panic-buyers and enforce social distancing – The Sun
26/03/2020
Coronavirus: Good Morning Britain’s Dr Hilary reveals ‘game-changing’ self-testing kit
26/03/2020
Recent Posts
This website uses cookies to improve your user experience and to provide you with advertisements that are relevant to your interests. By continuing to browse the site you are agreeing to our use of cookies.Ok