Kurt ‘The CyberGuy’ Knutsson discusses on ‘Fox and Friends Weekend’ traveling amid the coronavirus pandemic.

Alaska Airlines may soon be banning more than a dozen passengers whose behavior was deemed "unacceptable" on a recent flight from Washington, D.C., to Seattle.

An airline spokesperson confirmed that the offending passengers, of which there were at least 14, had refused to wear masks (as per Alaska’s current coronavirus policy) and also harassed crew members during the flight, which took off from Dulles International Airport for Seattle-Tacoma International Airport on Thursday, KIRO 7 reported.

"We will not tolerate any disturbance onboard our aircraft or at any of the airports we serve," the spokesperson for the carrier said in a statement obtained by the outlet. 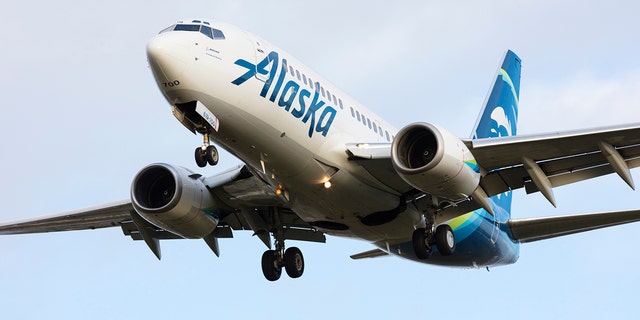 An airline spokesperson reportedly confirmed that the offending passengers had refused to wear masks and also harassed crew members during the flight.
(iStock)

Alaska Airlines had also confirmed the potential ban of these passengers from future flights, per KIRO 7.

Thursday’s incident follows the airline industry publicly announcing larger changes to current policy in the wake of Wednesday’s rioting at the U.S. Capitol, during which a mob breached the entrance and stormed the building. The ensuing chaos resulted in at least 70 arrests by Thursday morning, as well as the deaths of at least five people who had either suffered medical emergencies or serious injury. Police confirmed that U.S. Capitol Police Officer Brian Sicknick was among those who died of injuries sustained during the riots.

Sara Nelson, the president of the Association of Flight Attendants-CWA, has since called for the ban of any persons who participated in the "violent and seditious actions at the Capitol," urging the U.S. government to "disqualify these individuals from the freedom of flight."

United Airlines, Delta Air Lines and American Airlines had also confirmed heightened security measures at D.C.-area airports, with the latter confirming to Fox News that alcohol will no longer be sold on flights to or leaving from the D.C. area.

A representative for Alaska Airlines did not immediately respond to requests for additional comment.

Related posts:
‘I Contracted HIV From A One-Night Stand In College. Forgiveness Gave Me My Power Back’
Peter Weber Moves to NYC After Kelley Flanagan Split: ‘Ready to Go’
Popular News
Robbie Williams is quarantining in the Caribbean after testing positive for Covid while on holiday with family
19/01/2021
Man Utd wonderkid Ramon Calliste, called ‘the next Giggs’, now owns luxury watch business and makes £5m a year – The Sun
26/03/2020
Megan Thee Stallion Addresses Criticism Over Twerking: ‘I Love to Shake My A**’
26/03/2020
Police guard shops to stop coronavirus panic-buyers and enforce social distancing – The Sun
26/03/2020
Coronavirus: Good Morning Britain’s Dr Hilary reveals ‘game-changing’ self-testing kit
26/03/2020
Recent Posts
This website uses cookies to improve your user experience and to provide you with advertisements that are relevant to your interests. By continuing to browse the site you are agreeing to our use of cookies.Ok