Competition tsar Rod Sims will not change key elements of a draft regulatory code that would force Google and Facebook to pay news outlets for their content, despite pressure from the tech giants to water it down.

Mr Sims said arbitration and non-discrimination rules were the "glue" holding the news media bargaining code together and would remain in the final version handed to the Morrison government early next month. 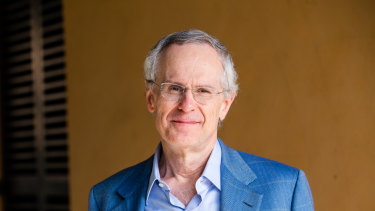 Rod Sims’ moves to find a solution to some of the problems created by the power of big tech platforms are gaining global attention.Credit:Edwina Pickles

"The code will change. It's a draft. A draft is meant to elicit comment and we've got a lot of comment," Mr Sims said during a digital panel hosted by The Australia Institute.

"But the core of the code can't change. You need an arbitration mechanism. You need a non-discrimination clause. They are the bits of glue that hold the code together that make it workable."

The code, announced by the ACCC in July and expected to be legislated before the end of the year, would give media companies three months to strike a deal about payment for use of their articles. If there was no agreement, an arbitrator would make the decision.

The Australian Competition and Consumer Commission has added a non-discrimination rule to stop Facebook and Google treating the content of news publishers differently based on whether they were eligible to participate in the code. Failure to comply could cost the tech giants $10 million, or up to 10 per cent of local revenue.

While traditional media companies like Nine, owner of this masthead, and News Corp have largely welcomed the draft code, both Google and Facebook have described it as "unworkable".

On Wednesday, Facebook's vice-president of public policy for Asia-Pacific, Simon Milner, told a parliamentary inquiry the code would make it uneconomic for news to exist on the social media giant's local platforms. Facebook has previously warned users it will remove news from its platform and Instagram altogether if the legislation is implemented.

Sources close to Google say it is also considering the removal of search from the market. The tech giants are concerned about rules requiring them to provide advance notice of changes to the algorithms that power search results and news feeds, and sharing user data. Both companies are lobbying for changes to the arbitration process.

While Mr Sims will not budge on core elements of the code, he flagged the ACCC would "clarify" the requirements for Google and Facebook to provide this information.

He said whether these changes amounted to a watering down of the code was a matter of perspective, adding it was for Parliament to decide the final content of the code.

"There will be changes that some like and some don't, but that core element that addresses the market balance won't change," he said. Mr Sims admitted he was uncertain whether Facebook would follow through with its threat to block Australians from sharing news on its platforms.

"At the end of the day, what they do is their call and I don't know what they are going to do," Mr Sims said. "I think it would be a shame for Australian democracy, a shame for Facebook users, if they chose that course of action."