A TikTok user shares surprising facts about movie and TV props, from building fake barbed wire to creating a book without pages 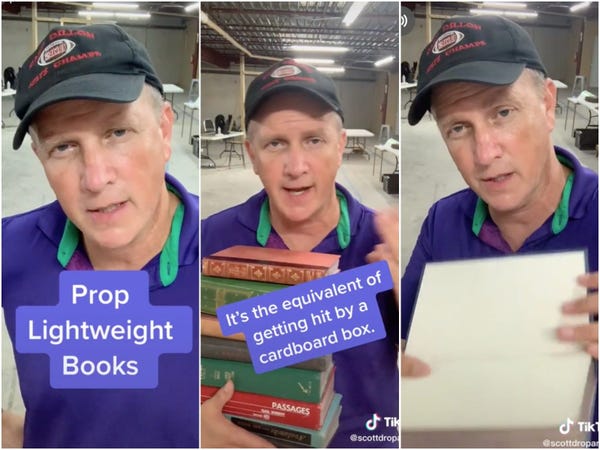 One TikTok user is giving viewers a behind-the-scenes look at how props are made for TV and film.

Scott Reeder has been working with props since he was 19 years old in 1989. In 2001, he became a certified prop master, which means he oversees prop acquisition and usage for major films and TV shows. He's worked on TV shows like "Friday Night Lights" and "The Leftovers," and movies such as "Grindhouse" and "Friday the 13th."

In one of his videos, he revealed that most books on set are not actually real or filled with pages. He shared that prop books have to be made lightweight for certain movie and TV scenes. They have to be able to hit an actor without hurting them, he said.

"Every once in a while we'll get a scene where we need fake books, like when an actor is throwing a book at another actor or a bookshelf falls and dumps books on someone," he said in the video.

He also detailed the simple process that goes into creating a fake book. Cutting the pages from a regular book, he then glued in foam, then glued a printed paper with the illusion of book pages over the foam to make it look realistic.

One of Reeder's most-viewed videos on TikTok, which has been played more than 10 million times at the time of writing, is titled "Props you never knew existed."

In the video, Reeder revealed a number of "silent props" that he said are used to reduce background noise when filming.

He tells viewers that to cut down on noise on set, fake grocery bags are made out of vinyl, which is less noisy than the traditional plastic or paper bags. In addition, pool balls, which are normally heavy and loud, are often swapped with painted racquetballs.

In another video, Reeder showed fans how to make fake barbed wire, which is used on set so it doesn't hurt the actors and crew.

Reeder shared that he uses finely-cut strips of rubber, rather than metal, to create the "barbs" on the wire.

"That way when an actor is crawling through a fence they won't yell 'Ouch' and blow the take," he says.

In another video, Reeder told fans that oftentimes, babies they see in movies and TV shows are not real — they're known as prop babies, and are made using two types of dolls: store-bought baby dolls for up-close shots, and more expensive, silicone dolls for shots captured from far away.

"When I was working on 'The Leftovers,' that particular summer was really hot, so we didn't want to have a real baby out at the river when it was 101 degrees," Reeder told Insider. "I got together with the director and visual effects team and they used a silicone baby and did a digital face replacement."

Reeder said that he was inspired to share his tricks of the trade on TikTok to reveal the amount of behind-the-scenes work that goes into film and TV.

"People don't realize how much goes into a film — not just the props, but also the hair and makeup and construction," he said. "I thought I'd give people a little sneak peek into what it takes to make a film or television show, the work that goes into it, and the things that people don't think about."