Missing this in “Glee” may have you feeling like a real dummy.

Besides dancing videos, TikTok has also become a place for people to share mistakes they noticed in movies and TV shows, and user @kellysipos just discovered something about “Glee” that’s hard to unsee. 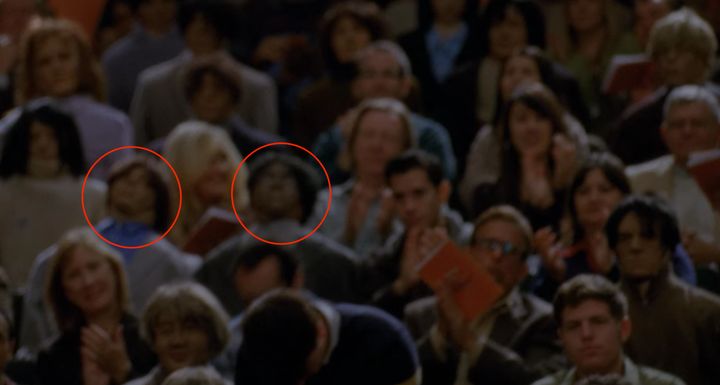 In a now-viral video, @kellysipos shares a scene from season four’s eighth episode, “Thanksgiving,” showing mannequins in the audience.

“I’m just noticing in ‘Glee,’ um, there are dummies in the crowd,” @kellysipos said, pointing out all the disturbing-looking seat fillers. “I feel like I’m in the ‘House of Wax.’”

See the video below.

As weird (and disturbing) as it seems, other shows also use dummies to fill seats when needed. Other TikTok users pointed out in the comments on the video that “The Office” used seat fillers for season two’s episode 17, “Dwight’s Speech.”

In the “Office Ladies” podcast, actors Jenna Fischer and Angela Kinsey discussed the seat fillers, saying the episode had 400 extras and 100 dummies, which were torsos dressed up in suits, and five dummy wranglers to move the dummies around, depending on the shot.

The dummies were said to be in the back and on the sides of the crowd during Dwight’s speech, but they’re there if you look hard enough. Watch for the people who don’t react when Dwight slams his fists on the podium around 2:43. Only dummies wouldn’t listen to Dwight.

Reps for “Glee” co-creator Ryan Murphy did not immediately reply to a request for comment. Though it’s safe to say “Glee” just got a bit creepier — you know, besides all those other more obvious times it was creepy.