Chris Paul is one of the biggest names in professional basketball. Known as one of the best point guards who has ever played the game, Paul also has a reputation as one of the more peculiar personalities in the NBA.

This stretches off the court, where a game of a different sort dominates Paul’s passion and helps him pass the time when he isn’t doing basketball or workouts.

What can’t Chris Paul live without? 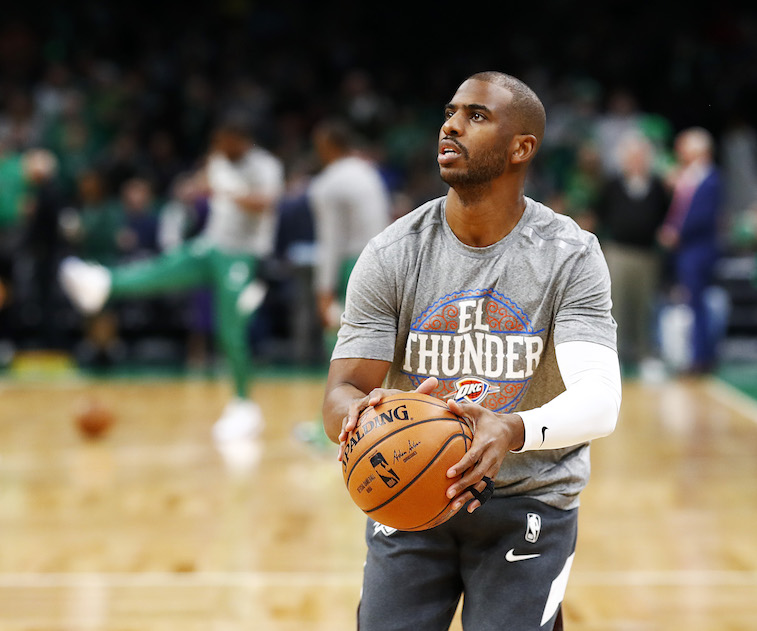 In a video for GQ, Paul talked about the things he needs with him at all times to feel comfortable. The answers range from the typical to the unique. One of the more unique things that Paul carries with him is a lumbar roll. This apparatus is worn almost like a backward fanny pack and is meant to help keep people’s posture upright when they are sitting down.

Other items include watermelon water, cherry water, or plain old drinking water. Not always thinking about his physical growth, Paul always has a book with him to expand his mind, as well.

A fashionable sort, Paul also carries watches with him in a case, stating that he feels naked without a watch. Similarly, Paul states his discomfort without having a hat or a family necklace that he claims to wear at all times away from the court. For his more fashionable choices, Paul constantly keeps a lapel pin on him. He tops off his fashion choices with aerobic socks.

For life on the road, he always has a phone on him, as his family maintains their residency in LA even as he plays in Oklahoma City. He also carries an iPad to watch shows and earbuds to do both of those things privately. One item in particular, however, might be most important to Paul.

“There’s not usually a day that goes by that I don’t play some form of cards.”

NBA players are known for their love of gambling, and with lots of downtime on planes and buses, the players need to pass time. While Paul doesn’t say whether or not the cards are for gambling purposes, he has a love for card games and views them as the ultimate way to pass the time and keep his mind occupied.

What does Chris Paul play?

Chris Paul named two games in particular when he spoke about his love for playing cards.

“I’ve always got a deck of cards with me, just in case somebody wants to play guts, whatever. If you want to play Aunts, whatever card game is, I play cards,” Paul said.

Presumably, Aunts is speaking about Aunt Mary, a card game that combines solitaire, but puts it in a group setting that adds a level of competition. Guts is a game that is similar to blackjack, although with more mystery. Players are dealt two cards to have the best hand. They ante between each round, and the player with the highest hand wins the jackpot if there is money involved.

On top of the games, Paul spoke about his card-playing crew and why cards are important to him during travel.

“On our team, our crew that plays is me, Dennis Schroder, and [Danilo] Gallinari, and we play every flight,” Paul said. “I’m somewhat of a bad flyer, so the way that I make myself feel like I’m not on the plane is I play cards. Gotta have a deck of cards.”

Chris Paul is a many of many layers. He might be known for his relentless play on the court, but off the court, he has other interests. Cards are not just a means to win money or have fun, they are a cathartic endeavor. For a player who is as competitive as Paul, it makes perfect sense that something such as this would pique his interest and help him pass the time when he isn’t dribbling the ball or dropping dimes.