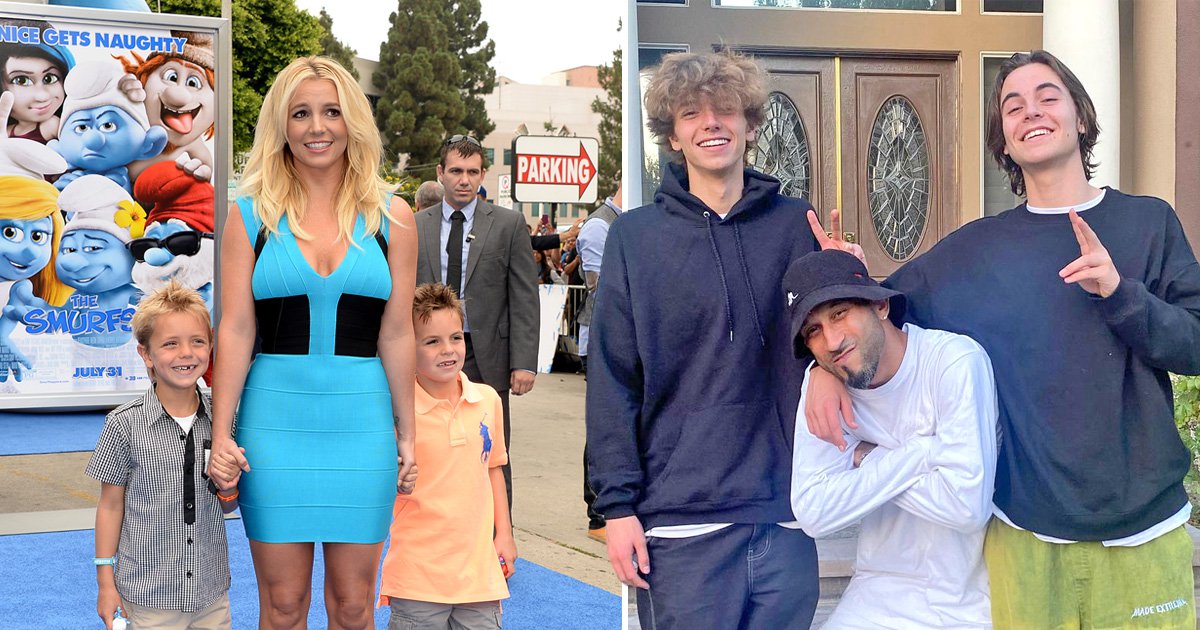 Any 90s kids trying to run away from the harsh mistress of ageing better turn away now, because Britney Spears sons are all grown up.

The star’s boys with ex-husband Kevin Federline, Sean Preston, 16, and Jayden James, 15, were seen in a rare shot on social media and, well, would you look at that, we’ve just aged a whole decade at seeing these strapping young men.

Spending some time with their dad Kevin – who Britney split with in 2007 – the two brothers beamed for the camera in photos shared by CEO of Movision Entertainment, Eddie Morales.

Eddie could be seen with his arms wrapped around Jayden and Sean, as he wrote: ‘During times of grief knowing u have #family really feels worth living. Talk bout seeing my nephews when they were pods smaller then my hands now look at #life, [sic]’ adding: ‘NOW THE WORLD WILL SEE HOW MUCH OF A GREAT #DAD HE HAS BEEN!’

Britney, who recently scored a win in her conservatorship battle, with her father Jamie Spears stepping down, previously paid tribute to her ‘private’ sons under a quote that read: ‘There is nothing stronger than the love between a mother and son.’

She added alongside a photo of her beaming with her children: ‘My boys’ birthdays were last week … and unfortunately they are growing up and want to do their own things.

‘I have to ask their permission to post them because they are extremely independent little men!!! Anyway we had a small party and the coolest ice cream cakes!!! It makes me crazy because they are so tall and geez they are still growing!!!

‘They went to a dance last week and I cried for two days. My babies in a suit!!! It’s crazy!!! And girls get ready cause my boys are so handsome!!! I truly believe this quote which is why I wanted to share it.’

She concluded the post: ‘There’s a lot I can’t share with you all because my kids are very private which I love but I will tell you they are both extremely talented and I’m so incredibly blessed to have these two little men in my life!!!

‘And if they’re reading this … which I’m pretty sure they’re not … I love you two little devils so much!!!’

The Oops… I Did It Again singer was placed under conservatorship a year after her split with Kevin while battling mental health issues. In 2019, it was agreed that Kevin would have 70% custody of the boys leaving Britney with 30%.

Kevin has not been involved with Britney’s conservatorship but ‘wishes the singer well’ and previously addressed the controversial revelations in Britney’s testimony in regards to her conservatorship and is focused on the wellbeing of their sons.

His comments follow a 2019 emergency restraining order against Britney’s dad, Jamie, after he reportedly ‘assaulted’ her son Preston.

His lawyer Mark Vincent Kaplan told Entertainment Tonight: ‘Kevin feels that the best thing for his children is for their mother to be happy and healthy. What is best for her, Kevin supports her in being able to do that…

‘It doesn’t matter how positive of an effect a conservatorship has had if it’s having a deleterious effect and detrimental effect on her state of mind.’

He continued: ‘So he supports her having the best environment for her to live in and for his children to visit with their mother in.

‘Kevin feels that the best thing for his children is for their mother to be happy and healthy.’

He added on Kevin’s behalf: ‘He wants her to be a happy person because that would make her a happy mother and obviously I think one of the takeaways we could all [hear] from her comments is that she is under a tremendous amount of pressure…

‘If she is able to handle herself in a way that does not jeopardise herself or her children should they be in her custody, Kevin is very comfortable with the conservatorship being dissolved.’