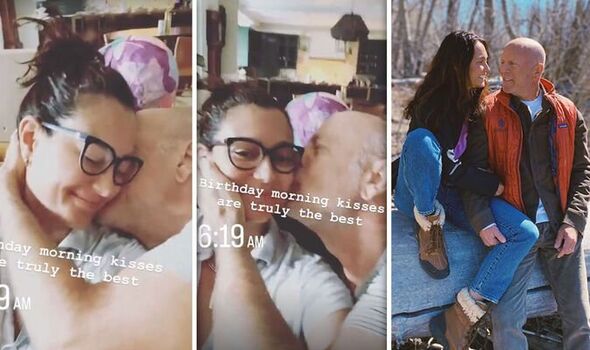 Emma posted a tender video with her husband Bruce on her birthday.

As Emma celebrated turning 44, she called her beloved husband’s kisses “truly the best”.

In view of her 352k followers, Emma posted a video sitting on the sofa with the Sixth Sense star as he cradled her face and covered her in kisses.

“Birthday morning kisses are truly the best,” she wrote.

Her post comes months after the Hollywood star announced that he was stepping away from acting after being diagnosed with aphasia – a condition that affects his cognitive abilities.

According to the Mayo Clinic, aphasia is “a condition that robs you of the ability to communicate” and can be caused by a stroke, head injury, brain tumour or a disease.

Bruce could be seen planting kisses on his wife’s face

Emma beamed as she called the kisses “truly the best”.

Emma closed her eyes as she spent quality time with Bruce

Bruce recently made headlines when he retired from acting due to a health condition.

Bruce could also be spotted in another video

Emma filmed her birthday celebrations as she turned 44.

The couple have been married since 2009

Emma has been supporting Bruce amid his aphasia diagnosis.

Bruce and Emma with his daughters Rumer, Tallulah and Scout

He shares his daughters with his ex-wife Demi Moore.

Emma recently said she had “so much respect” for Bruce

She revealed she was in awe of how he never let fear hold him back.

Aphasia is a degenerative condition that affects someone’s ability to communicate.