Travis Scott celebrates at the basketball after reuniting with Kylie Jenner 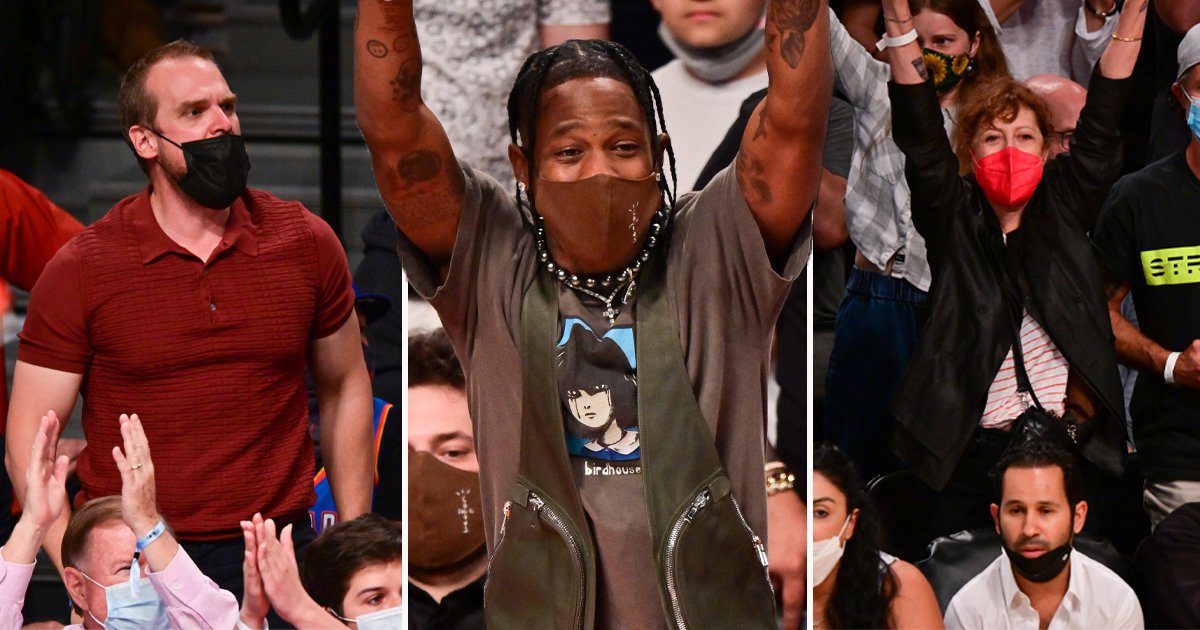 Travis Scott seems to be in a good place as he was spotted getting excited at a basketball match on Tuesday, having reunited with his ex Kylie Jenner and their daughter Stormi for 24 hours in New York.

The pair appeared to confirm they had rekindled their romance as they posed for cosy pictures together on the red carpet, as Travis was honoured at the 72nd annual Parsons Benefit.

He was later seen cheering and waving at a basketball game in Brooklyn as Brooklyn Nets took on Milwaukee Bucks in front of a star-studded audience.

The rapper sported a brown graphic T-shirt with brown trousers, wearing a brown face mask while sat in the crowd to keep safe.

He wasn’t the only famous face courtside, as Stranger Things star David Harbour and acting icon Susan Sarandon were also seen in the crowd enjoying the game.

X-Men star Zoe Kravitz, and actors Jason Sudeikis and Busy Philipps had their seats for the game too, and were getting just animated as the musician as they watched the action.

Travis, 30, and Kylie have been co-parenting their three-year-old daughter since their split, but it seems they have grown much closer over the last year.

The on-off couple jetted off to New York last night by private jet with Stormi, stopping for a spontaneous photoshoot at The Rooftop at Pier 17.

Travis later got handsy on the red carpet, posing with one hand on his 23-year-old former flame’s waist.

When he accepted his award the star gave a shout out to his little family, saying on stage: ‘Stormi, I love you and wifey, I love you.’

It was the first time Travis, Kylie and Stormi had appeared on the red carpet together since attending the premiere of the rapper’s Netflix documentary, Look Mom I Can Fly, in August 2019.