Tom Brady’s entire family was in Tampa Bay to watch him win his 7th Super Bowl ring on Feb. 7! The legendary QB and wife Gisele Bundchen enjoyed a group hug on the field with daughter Vivian, 8, and sons Benjamin, 11, and Jack, 13!

In the midst of falling confetti and flashing camera lights, Tom Brady managed to find his wife Gisele Bundchen and their kids for a post-Super Bowl celebration — Brady style! The couple’s daughter Vivian Lake, 8, and son Benjamin Brady, 11, along with Tom’s 13-year-old John Edward Thomas (Jack) Moynahan (from his previous relationship with ex-girlfriend Bridget Moynahan, 49) were decked out in their dad’s Tampa Bay Buccaneers jerseys. Little Vivian, who’s a spitting image of her model mom, donned a long sleeve shirt in Tampa Bay red. 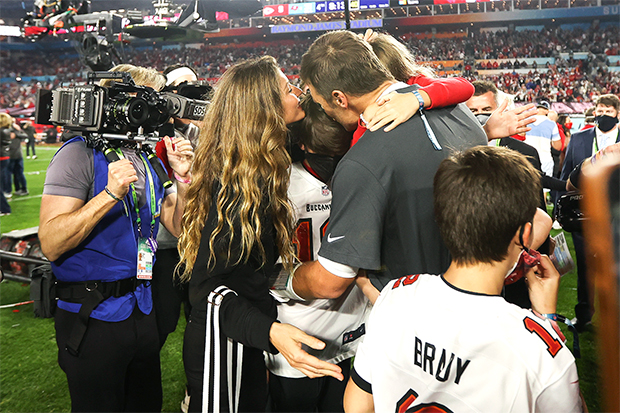 After Tom helped lead his Buccaneers to a 31-26 win over the Green Bay Packers in the NFC Championship Game on January 24, Gisele shared the cutest snap with the couple’s kids. The adorable trio, who Tom called the “best cheering section in the WORLD” in the comments, were all smiles while dressed in No. 12 jerseys. 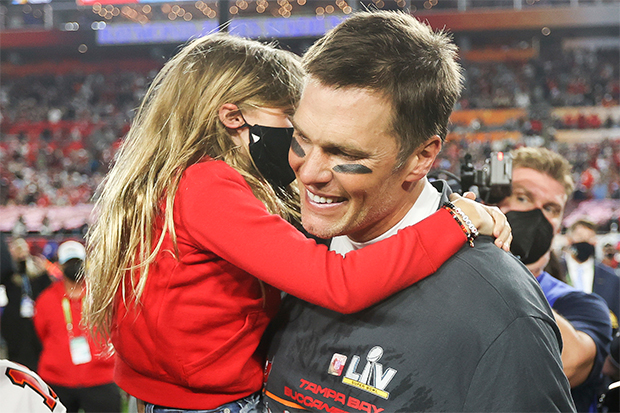 Tom and Gisele, who got engaged after two years of dating, tied the knot in 2009 in a church ceremony in Santa Monica, CA. They welcomed their first child, Benjamin in December of that same year, and Vivian arrived in December of 2012. The longtime couple met while Tom was still dating his Moynahan. Though, Gisele has recalled that her initial meeting with Tom was love at first sight.

“I knew right way — the first time I saw him,” Gisele told Vanity Fair in a 2009 profile. “We met through a friend. The moment I saw him, he smiled and I was like, ‘That is the most beautiful, charismatic smile I’ve ever seen! We sat and talked for three hours. I had to go home for Christmas, but I didn’t want to leave,” she remembered.