Mid-way through Season 5, This Is Us brought fans a new "Big Three" to love. Fans knew going into the Feb. 16 episode that Madison would give birth to Kevin’s twins, while Ellie would give birth to Kate and Toby’s adopted daughter, Hailey. But no one foresaw the small stories within these larger moments that would matter so much. Nor did they know how strangers would help their journeys along the way. But one such little moment will be honored forever, with the meaning of Hailey’s middle name on This Is Us.

Warning: Spoilers for This Is Us Season 5, Episode 8 follow. Ever since Toby and Kate decided to adopt, viewers have worried that disappointments would follow. But as This Is Us‘ creator Dan Fogelman pointed out early on, "the large, large majority of adoptions go forward," hinting at the happy outcome the loving couple ended up getting. Despite fans’ anxiety and birth mother Ellie’s private goodbye to her biological daughter, the new baby did indeed go to Kate and Toby.

But there was one small hiccup: Due to precautions put in place because of the coronavirus pandemic, Toby couldn’t be inside the hospital to see the birth. Instead, he was stuck tailgating in the parking lot, waiting for texts and photos from Kate, who got to be Ellie’s plus-one in the room. In exchange for this perk, Kate said Toby could pick the child’s middle name with no arguments from her. (Hailey, the first name, was already nailed down.) 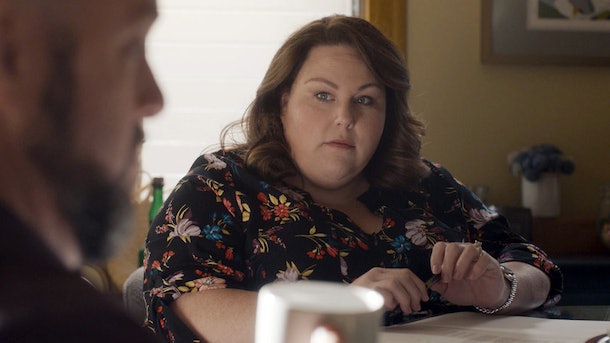 As Toby sat outside in the cold debating this critical question, he was interrupted by the oddest of demands. In an almost-empty parking lot, a man drove up to him and said, "You’re in my space."

As weird as it might seem, Toby soon understood why he was being asked to move his car when there were hundreds of empty spaces all around. The man was there to sit outside the hospital while his wife of 55 years, Rose, lay upstairs on a ventilator in the COVID ward. He explained Rose is a superstitious woman, so he makes it a point to park in space 157, her favorite number, just in case it might make a difference in her survival. Toby, himself a superstitious person, immediately moved his car.

As the two hung out in the parking lot, the man told Toby all about Rose. She loved pig figurines ever since their honeymoon in Austria, so he’d brought their whole "bacon army" in the car for luck. When Toby told him about Ellie and how they were adopting Hailey from her, the man pulled a little ceramic pig in ribbons and bows and gave it to Toby "for luck." It was one of Rose’s favorites, he said.

When Kate called down with the news the baby was alive and well and definitely theirs, Toby didn’t hesitate to announce his decision on his new daughter’s middle name: "Hello, Hailey Rose."

Kate naturally assumed this was a Star Wars reference to Rose Tico. This was Toby, after all. But in fact, it was a tribute to someone else fighting to live who also made it through the night. As the episode closed, viewers finally saw Rose, now off the ventilator and ready to go home with her devoted husband.

This Is Us continues Tuesdays at 9 p.m. ET on NBC.