Home » Celebrities » Steph Curry Says He Doesn't Mind Drake's Sideline Trolling, Even When He Takes It Too Far

Steph Curry Says He Doesn't Mind Drake's Sideline Trolling, Even When He Takes It Too Far

Steph Curry is among the most recognizable names in professional sports, and there might not be a hotter rapper around right now than Drake. As such, when the two coincide, it is bound to generate a little bit of buzz.

This was on full display in June of 2019 when Drake was seen on the sidelines of every Raptors home game talking trash to Curry and his teammates. None of this means that there’s any bad blood, however. In fact, there appears to be mutual respect between them. 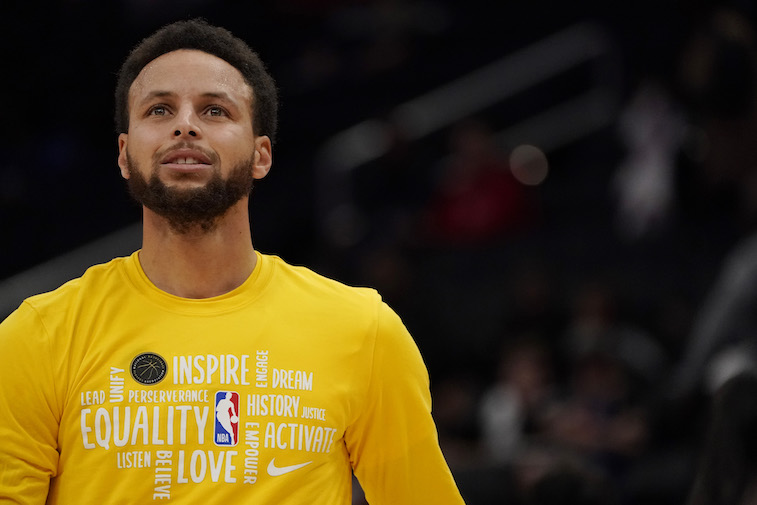 Drake’s antics during the Finals were nothing new. For years, he has been an ambassador to the Toronto Raptors, and every April, he let his presence be known at every playoff game.

For years, this was the source of ire among sports fans, who labeled Drake’s appearances at sporting events and the ensuing failures of whoever he was cheering for the “Drake curse.” However, when the Toronto Raptors were hoisting the Championship trophy, these had to be sidelined.

Drake has spoken respectfully about Curry multiple times in his songs. While the two may spar on the court when Curry’s Warriors are playing, off the court the two consider each other good friends. This makes the trash talk easier to swallow for Curry, who isn’t averse to talking a little bit of trash himself.

“It’s a bit entertaining,” Curry said (per Complex). “It’s a tricky situation with him being right there on the court. But at the end of the day, he’s having fun. You can’t hate on nobody having fun.”

The trash talk goes deeper than on the court, however.

Before the NBA Finals, Steph planned on paying tribute to his father by appearing at the arena in one of his jerseys. However, he heard through the grapevine that Drake, knowing about the familial connection to his team, was going to wear the same jersey to game 1 to troll Curry. Curry laughed it off and used it as fuel on the court.

“It was all fun. You know all about the trolling and everything,” Curry said (per SF Gate). “He went to great depth to get that jersey, so it’s probably a little bit of respect. I think more than that, it fired up the Warriors even more to try to steal a game there in Toronto and I think they did just that.”

Drake reportedly requested the jersey at 1 AM the day of the game but was able to do so thanks to some connections with his stylist. A friend drove 10 hours to ensure that Drake would get his jersey in time to troll Curry.

The two have more in common than one might think, too. Curry spent part of his childhood in Toronto when his dad was a member of the Toronto Raptors. He has spoken about his love for Drake’s hometown many times.

In the late nineties and early aughts, Curry went to school and lived in Toronto. While most kids his age were going to school and playing video games, he was playing one-on-one with Vince Carter and hanging around NBA stadiums.

The city was good to the Curry family, and he appreciates what it did for them to this day.

“I spent sixth through eighth grade up there,” Steph said before the NBA Finals last year. “I talked about it before, it’s always special going back up there. I still don’t think it’s sunk in this is for the Finals.”

Like many friends, Drake and Curry like getting beneath each other’s skin, but there’s mutual love and respect between both of them. When the ball is tipped, they might be talking trash and using each other as fuel, but after the game, they will exchange hugs and catch up with each other as friends often do.

Related posts:
Kylie Jenner's $1,500 Tie-Dye Loungewear Sets the Tone for Summer's New Style Craze
‘RHOBH’ Preview: Kyle Richards Flips Out After Lisa Rinna Questions Her Loyalty — Watch
Popular News
Yara Shahidi Reacted To Her Casting As Tinker Bell In Disney’s Live-Action ‘Peter Pan’ Movie
26/09/2020
Man Utd wonderkid Ramon Calliste, called ‘the next Giggs’, now owns luxury watch business and makes £5m a year – The Sun
26/03/2020
Megan Thee Stallion Addresses Criticism Over Twerking: ‘I Love to Shake My A**’
26/03/2020
Police guard shops to stop coronavirus panic-buyers and enforce social distancing – The Sun
26/03/2020
Coronavirus: Good Morning Britain’s Dr Hilary reveals ‘game-changing’ self-testing kit
26/03/2020
Recent Posts
This website uses cookies to improve your user experience and to provide you with advertisements that are relevant to your interests. By continuing to browse the site you are agreeing to our use of cookies.Ok