Slick Woods takes our Zoom meeting standing up. As I sit on the living room floor of my Queens apartment, Woods is in Los Angeles, cooly pacing in a sun-drenched room through our entire chat. She's wearing all black; a roomy hoodie and baggy pants. She's got a few silver chains around her neck. When we first start talking, she's wearing a black leather teddy bear backpack, slung to the front as if she's a tourist on a day trip in a foreign country — a cool-looking tourist. The kind that makes you wonder where she came from. She eventually takes it off. Her signature buzz is dyed a yellow-orange hue, the color of a delicious cocktail, or "orange blaze, if you want to be specific," as Woods tells me.

Woods seems very familiar, but not for obvious reasons. Sure, I recognize her face: We've all seen it in campaigns for Fenty Beauty, Moschino, and Ugg, to name a (very) few. But it's more than that. The way she stands, the way she speaks, the way she swings her arms together and then apart, her hands hanging low and her shoulders raised. It reminds me of a neighbor or a friend I haven't seen in a year. 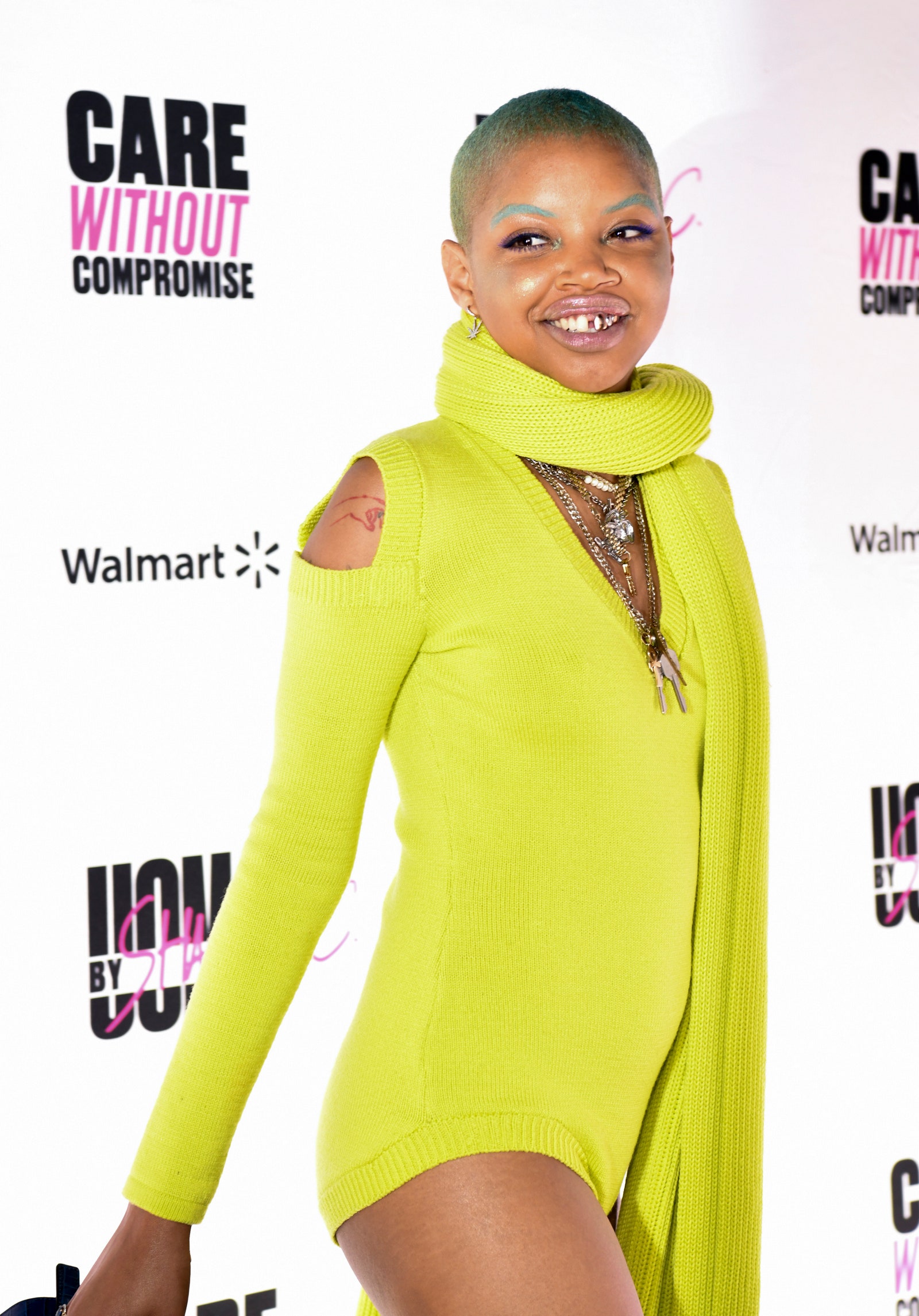 Woods is easy to talk to. But one thing she doesn't want to talk about? The skin cancer she was diagnosed with after her dentist noticed suspicious spots in her mouth during a routine appointment. The 24-year-old melanoma survivor likens it to asking someone about a scab. "You wouldn't ask somebody, 'how's your scab doing?' You know what I'm saying?" Fair enough. So, I say, "Let's talk about life, then."

That's a subject more in her wheelhouse. "I'm just trying to live the best of my years. I'm here for now — I'm here until I'm not, and that's it." And while she's here, Woods is focused mostly on her two-year-old son, Saphir. "Sometimes, I catch myself treating my son like he's a homie," she says, smiling. But of course, her mom instincts take over. "When I see him, I [hug] him up. Munch on his little cheeks." She hugs the air to demonstrate.

"Chemo is a bitch. I just opted out."

Two years after being diagnosed with Stage III melanoma, Woods is putting stock in her family, friends, and her work (which includes research on how to develop a CBD brand of her own). She's decided to stop chemo and look to the healing powers of cannabis, at least until she can figure out alternative treatment. To Woods, "It's part of life, you just accept that," she says. "You battle it. Chemo is a bitch. I just opted out." And make no mistake — she's comfortable with her decision.

But Woods always had a penchant for pot. She recently made an appearance for Jay Z's luxury cannabis brand, Monogram Company, and the way she talks about rolling a blunt, you can tell she's an old pro. But besides those herbal remedies, Woods takes care of herself by focusing on the people who are important to her in life. She grounds herself by spending time with her son and being with her friends and chosen family. "I'm very well endowed when it comes to friendship. I'm engulfed in loyalty. I try to just keep that same energy with everybody," she shares. 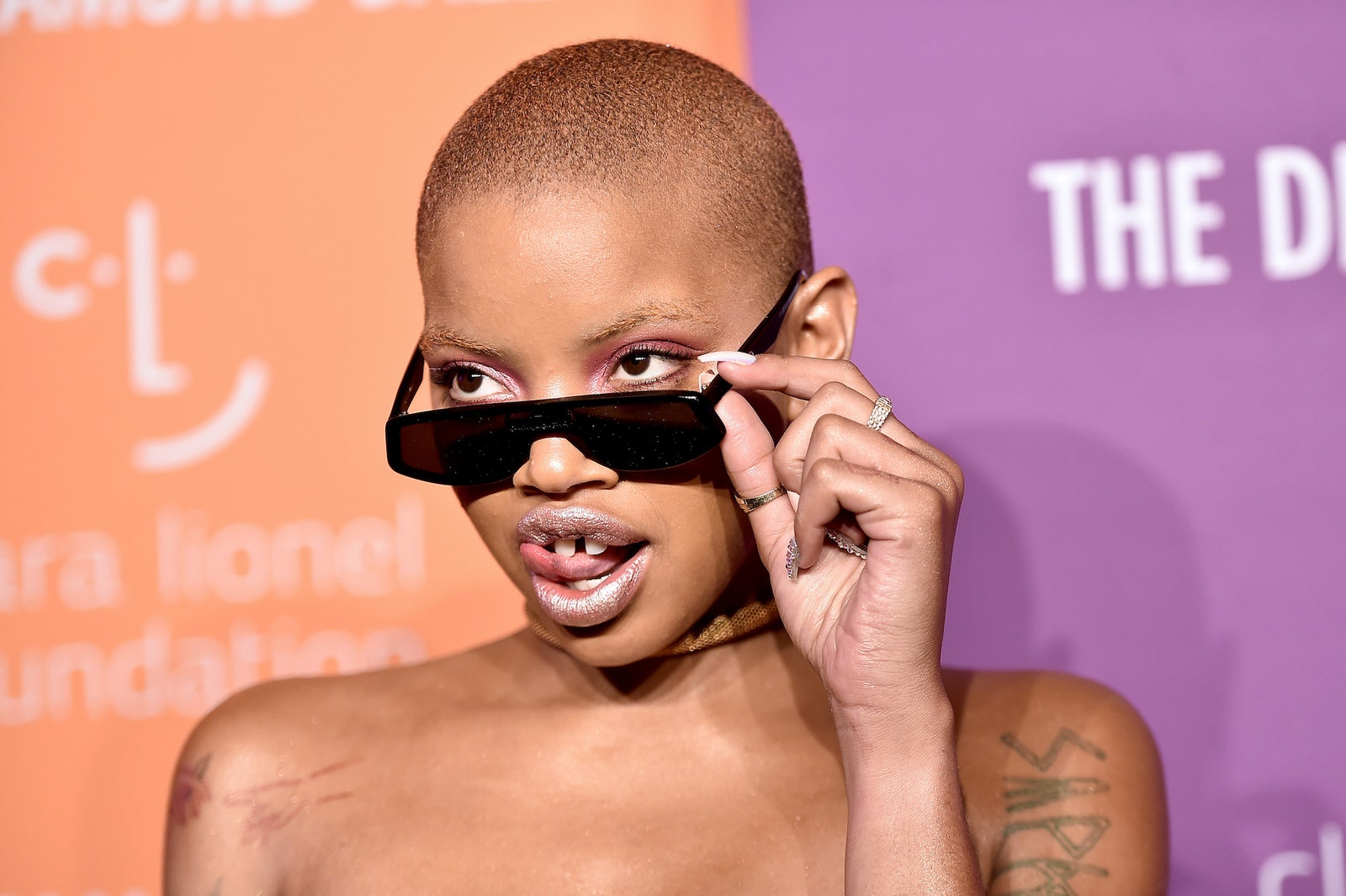 Naturally, Woods has had to make some changes with her approach to skin care over the past two years. But you won't catch her doing some kind of 10-step routine. When I ask her if she wears sunscreen, she says, "Yeah, now I do." But she's not loving it. "I don't really have a favorite kind because I hate wearing it, she says, noting that many sunscreens make her look "pasty," an issue those with a little extra melanin can relate to. She uses the residue-free options from Hawaiian Tropic's Silk Hydration line, though she's got another approach to sun-care which arguably, looks much cooler.

"I wear a ski mask every day," she says. "I got it from [rapper] Plies, actually. He wears his ski mask rolled up." It is now her accessory of choice, a white Ivy Park ski mask, which she says doubles as sun shield, and sometimes, a surgical face mask. She only pulls it down over her lips when it's time to get into an Uber. "I always lose my [face] mask, so I got to put a ski mask on. Then I just pull [it] up over my lips because really, my lips don't fit in those ski masks anyway."

Woods takes a similarly minimalist approach to the rest of her beauty rituals. She has about five products in her bathroom drawer overall. "Sunscreen, toothbrush, a little bit of gold dust, and oils — oh, and some bleach for my hair," she says, running through the extremely short list. She doesn't spent that much time in the mirror anyway. "I really don't look in the mirror when I go in the bathroom," she says. "Maybe it's a vanity thing. I'm just so secure in myself, I don't need to recheck. I know what the fuck I look like."

With a face like hers, it's hard to forget.